Two metres below the surface of the Atacama Desert there is an 'oasis' of microorganisms. Researchers from the Center of Astrobiology (Spain) and the Catholic University of the North in Chile have found it in hypersaline substrates thanks to SOLID, a detector for signs of life which could be used in environments similar to subsoil on Mars.

Life is bustling under the driest desert on Earth. A Spanish-Chilean team of scientists have found bacteria and archaea (primitive microorganisms) living two metres below the hypersaline substrates in the Atacama Desert in Chile, according to the journal Astrobiology.

"We have named it a 'microbial oasis' because we found microorganisms developing in a habitat that was rich in halite (rock salt) and other highly hygroscopic compounds (anhydrite and perchlorate) that absorb water" explained Victor Parro, researcher from the Center of Astrobiology (INTA-CSIC, Spain) and coordinator of the study.

Furthermore, the substrates where the microbes live favour deliquescence, which means they can attract the limited moisture in the air, condensing it on the surface of the salt crystals. Thin films of water that are a few microns thick are thereby formed.

In this environment, the underground microorganisms grow with everything they need to live: food and water. The species are not very different from others in similar hypersaline environments, but the peculiar thing is that they were discovered at a depth of between 2 and 3 metres, without any oxygen or sunlight. 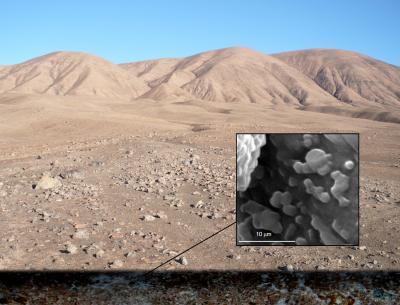 Microbes grow in salt crystals below the Atacama Desert.

To carry out this investigation, scientists used an instrument called SOLID (Signs of Life Detector), which was developed by the research team with the aim of using it for future missions on Mars.

The core of SOLID is a biochip –called LDChip– which includes up to 450 antibodies to identify biological material, such as sugar, DNA and protein. Samples can be taken, incubated and processed automatically and the results can be observed in an image with shiny points that show the presence of certain compounds and microorganisms.

Using this technique, the researchers in collaboration with Catholic University of the North in Chile have confirmed the presence of underground archaea and bacteria in the desert. They also took samples from a depth of up to 5 metres and took them to the laboratory, where not only were they able to photograph the microorganisms with the electron microscope, but also 'brought them into life' when supplied with water.

"If there are similar microbes on Mars or remains in similar conditions to the ones we have found in Atacama, we could detect them with instruments like SOLID" Parro highlighted.

The researcher explained that saline deposits have been found on the red planet, therefore it is possible to think that there maybe hypersaline environments in its subsoil. "The high concentration of salt has a double effect: it absorbs water between the crystals and lowers the freezing point, so that they can have thin films of water (in brine) at temperatures several degrees below zero, up to minus 20 C."

The high salt level and lack of water help preserve biological molecules, so that it was possible to find biological products in materials of this type, even though there were no live microorganisms since millions of years ago.