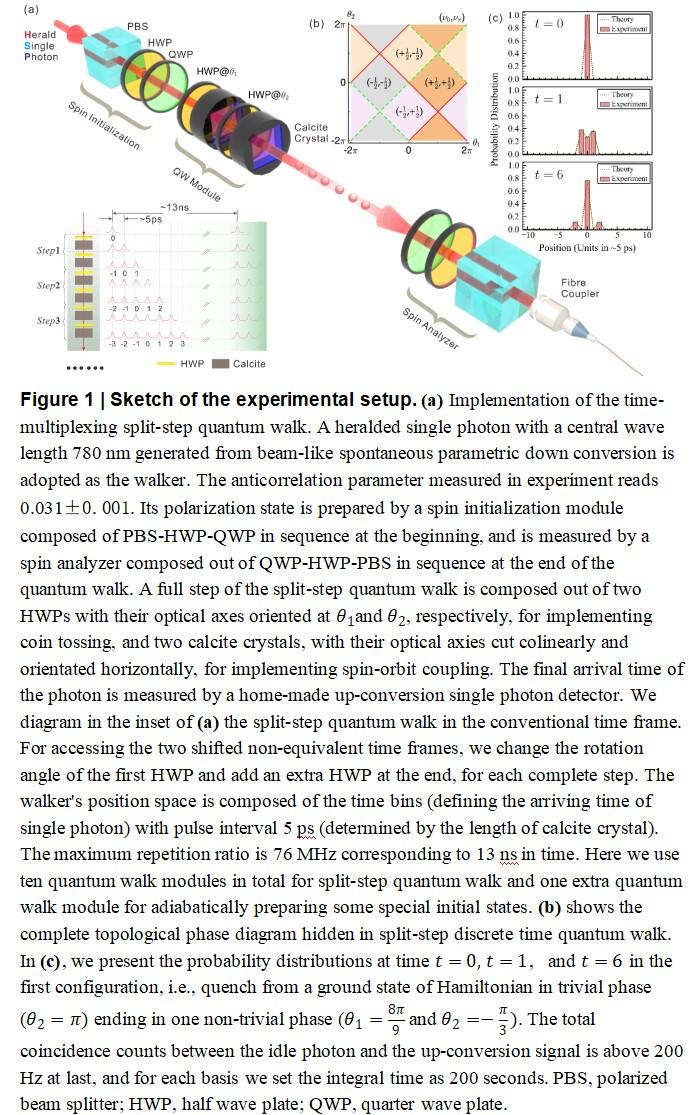 IMAGE: Sketch of the experimental setup

Coherence in quantum dynamics is at the heart of fascinating phenomena beyond the realm of classical physics, such as quantum interference effects, entanglement production and geometric phases.

Quantum processes of inherent dynamical nature defy a description in terms of an equilibrium statistical physics ensemble. Up to now, to identify general principles behind the underlying unitary quantum dynamics which preserve quantum coherence remains a key challenge.

Quantum walks provide a powerful and flexible platform to experimentally realize and probe coherent quantum time evolution far from thermal equilibrium. As opposed to classical random walks, quantum walks are characterized by quantum superpositions of amplitudes rather than classical probability distributions. This genuine quantum character has already been harnessed in various fields of physics, ranging from the design of efficient algorithms in quantum information processing, observation of correlated dynamics and Anderson localization, to the realization of exotic physical phenomena in the context topological phases.

While the topological order can be retrieved in the real space, accessing the full complex amplitude information characterizing the coherent superposition remains as one of the key challenges in quantum walk experiments.

In a new paper published in Light Science & Application, scientists from the CAS Key Laboratory of Quantum Information, University of Science and Technology of China, the Max-Planck-Institut für Physik komplexer Systeme, Germany, Institute of Theoretical Physics, Technische Universität Dresden, Germany, and co-workers reported on the direct observation of a dynamical topological order parameter (DTOP) that provides a dynamical characterization of quantum walks.

To this end, they realized a split-step quantum walk in a photonic system using the framework of time multiplexing. Using a previously developed technique, they achieved full state tomography of the time-evolved quantum state for up to 10 complete time steps. Importantly, this provided the full complex amplitude information of the quantum walk state.

"This is essential for our central goal of a dynamical classification of the quantum walk using the DTOP, since the DTOP measures the phase winding number ω_D (t) in momentum-space, namely of the so called Pancharatnam geometric phase (PGP)".

From the experimental results, they found that dynamical transitions between topologically distinct classes of quantum walks can be uniquely distinguished by the observed time-dependent behavior of ω_D (t).

Generalizing these observations, they further established a unique relation between the behavior of ω_D (t) and the change over a parameter quench in the topological properties of an effective Floquet Hamiltonian that stroboscopically describes the quantum walk.

"In this way we provide a nonequilibrium perspective onto quantum walks, which can be understood as a starting point towards approaching time-dependent processes from an inherently dynamical angle that goes beyond the notion of equilibrium statistical physics. With this and the mapping onto quenches in an equivalent quantum many-body system, our experiment offers a versatile platform to study coherent nonequilibrium dynamics of many paradigmatic models such as the Su-Schrieffer-Heeger model, the p-wave Kitaev chain, or the transverse field Ising model in the future." the scientists forecast.