Material developed could speed up underwater communications by orders of magnitude

In the January 6 issue of Nature Nanotechnology, Liu and colleagues show that an artificial metamaterial can increase the light intensity and "blink speed" of a fluorescent light-emitting dye molecule.

The nanopatterned layers of silver and silicon in the new material sped up the molecule's blink rate to 76 times faster than normal, while producing an 80-fold increase in its brightness.

"The major purpose of this program is to develop a better light source for communication purposes," Liu said. "But this is just a first step in the whole story. We have proved that this artificial, manmade material can be designed to enhance light emission and intensity, but the next step will be to apply this on conventional LEDs."

Extreme blinking speed – ultrafast modulation – in blue and green LEDs is a missing link that is necessary for increasing the rate at which information can be sent via optical channels through the open water, such as between ships and submarines, submarines and divers, underwater environmental sensors and unmanned underwater vehicles, or other combinations.

In underwater optical wireless communications systems, data is converted from an electrical signal to optical waves that travel through the water from a light source such as a LED to an optical receiver. Blinking blue and green LEDs are already used to transfer information through the water. (Blue and green LEDs are used because their light is less apt to be absorbed by the water than other colors.) 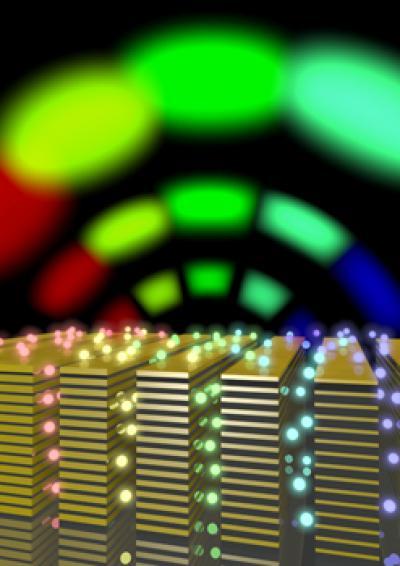 Electrical engineers at UC San Diego have demonstrated that artificial materials can significantly improve the speed of optical communications. The team showed that an artificial metamaterial can increase the light density and blink speed of a fluorescent light-emitting dye molecule.

The metamaterials developed by the researchers are synthetic, with properties not found in nature, and are specially designed to accelerate the light generation process.

So far, it's been difficult to directly convert an electrical signal into an optical signal in LEDs with adequate speed. At the moment, the blink rate for most of these converted signals is less than one gigahertz, a rate slower than the speed of most WiFi signals, Liu said.

The materials are designed to have extremely strong interactions with the light emitters that are specific to the wavelength--or color--of the emissions. In the new report, the researchers used a dye molecule that gives off a yellow-green hue. So the next step will be to pair the materials with the blue and green LEDs.

"The design of the materials may not be the hardest thing," said UC San Diego graduate student Dylan Lu, the lead author of the Nature Nanotechnology paper, who noted that they will work with LEDs that have been manufactured to a specific industry standard. "I think the major challenge, to apply it to LEDs, will be an integration issue."

Liu recently won a grant from the Office of Naval Research (ONR) to develop the fast-blinking blue and green LED systems, which includes a little more than $500,000 over three years.

"We started from advances in fundamental material research, and we want to transfer the knowledge to the LED business," said Liu. 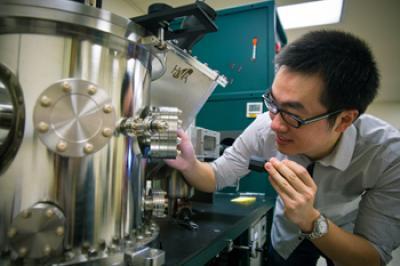