BUFFALO, N.Y. – Scientists at the University at Buffalo have identified the single transcription factor or "master switch" that initiates the critical myelination process in the brain. The research will be published online in Proceedings of the National Academy of Sciences (PNAS) on June 30.

The identification of this factor, SOX10, in human brain cells, brings researchers closer to the goal of treating multiple sclerosis (MS) by transplanting into patients the brain cells that make myelin.

"Now that we have identified SOX10 as an initiator of myelination, we can work on developing a viral or pharmaceutical approach to inducing it in MS patients," says Fraser Sim, PhD, senior author on the paper and assistant professor in the UB Department of Pharmacology and Toxicology in the School of Medicine and Biomedical Sciences.

"If we could create a small molecule drug that would switch on SOX10, that would be therapeutically important," he adds.

Stem cell therapy is seen as having dramatic potential for treating MS, but there are key obstacles, especially the length of time it takes for progenitor cells to turn into oligodendrocytes, the brain's myelin-making cells.

Using currently available methods, Sim explains, it can take as long as a year to generate a sufficient number of human oligodendrocyte cells to treat a single MS patient.

Using fetal (not embryonic) brain stem cells, the UB researchers searched for transcription factors that are absent in neural progenitor cells and switched on in oligodendrocyte progenitor cells. 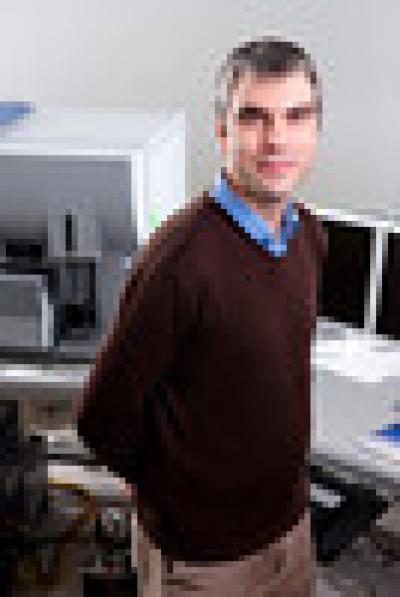 Research by Fraser Sim, Ph.D., and colleagues at UB, identifying the transcription factor for myelination, brings researchers closer to the goal of treating MS by transplanting into patients the brain cells that make myelin.

While neural progenitor cells are capable of producing myelin, they do so very poorly and can cause undesirable outcomes in patients, so the only candidate for transplantation is the oligodendrocyte progenitor.

To find out, they looked at different characteristics, such as mRNA expression, protein and whole gene expression and functional studies.

"We narrowed it down to a short list of 10 transcription factors that were made exclusively by oligodendrocyte progenitor cells," says Sim.

"Among all 10 factors that we studied, only SOX10 was able to make the switch from neural progenitor to oligodendrocyte progenitor cell," says Sim.

In addition, the UB researchers found that SOX10 could expedite the transformation from oligodendrocyte progenitor cell to differentiation as an oligodendrocyte, the myelin-producing cell and the ultimate treatment goal for MS.

"In MS, first the immune system attacks the brain, but the brain is unable to repair itself effectively," explains Sim. "If we could boost the regeneration step by facilitating formation of oligodendrocytes from progenitor cells, then we might be able to keep patients in the relapsing remitting stage of MS, a far less burdensome stage of disease than the later, progressive stage."

Sim is also an investigator with other scientists at UB and the University of Rochester on the $12.1 million New York State Stem Cell Science award led by SUNY Upstate Medical Center. The research will test the safety and effectiveness of implanting stem cells that can reproduce myelin into the central nervous system of MS patients.