Mass shooting epidemic? No, schools are 400 percent safer than in the 1990s 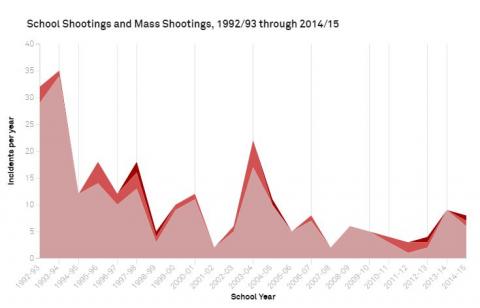 A deadly school shooting in Parkland, Florida, has renewed outrage about the availability of guns and led to more calls  for action on gun reform. We're being told mass shootings, especially at schools, are an epidemic. But that's not true, notes James Alan Fox, Professor of Criminology, Law, and Public Policy at Northeastern University. There are, on average, just 10 firearms deaths related to schools on average, while far  more kids are killed each year from pool drownings (3,536 on average) or bicycle accidents (almost 300.)

Since 1996, there have been 14 multiple victim shootings in schools, or incidents involving 4 or more victims and at least 2 deaths by firearms, excluding the assailant.

Of these, 7 are mass shootings, or incidents involving 4 or more deaths, excluding the assailant.

Using data collected by USA Today, the FBI’s Supplementary Homicide Report, Congressional Research Service, Gun Violence Archive, Stanford Geospatial Center and Stanford Libraries, Mother Jones, Everytown for Gun Safety, and a NYPD report on active shooters.Fox and doctoral student Emma Fridel found that on average, mass murders occur between 20 and 30 times per year, and about one of those incidents on average takes place at a school. 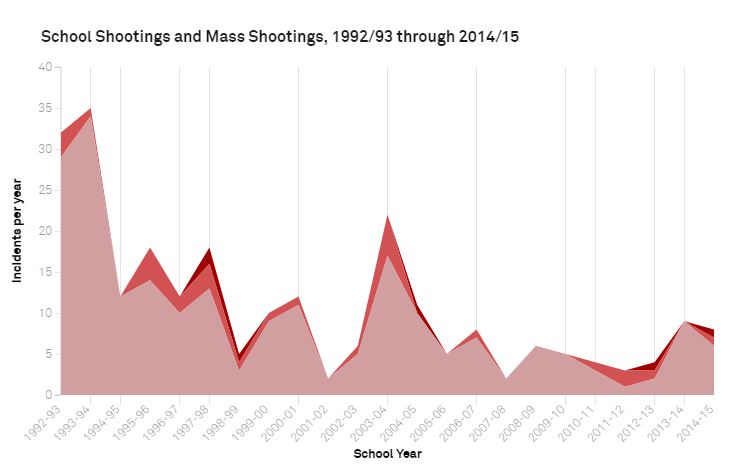 Mass school shootings are incredibly rare events.  There are around 55 million school children in the United States, and on average over the past 25 years, about 10 students per year were killed by gunfire at school, according to Fox and Fridel’s research.

Four times the number of children were killed in schools in the early 1990s than today, Fox said. “There is not an epidemic of school shootings.”

Mental health is being dismissed yet again - but it shouldn't be

The Parkland incident is in line with other mass shootings in that they all involved people with mental illness diagnoses. Yet it's being glossed over again. Increasing mental health resources for students might improve school safety. The U.S. is facing a desperate shortage of guidance counselors. In 2014-15, the student-to-school counselor ratio was 482-to-1, according to the American School Counselor Association, nearly twice the organization’s recommended ratio.

In 35 years, only 5 shootings involved someone under the age of 21

Banning bump stocks and raising the age of purchase for assault rifles from 18 to 21 may lead to a decrease in overall gun violence but they won't prevent school shootings. “The thing to remember is that these are extremely rare events, and no matter what you can come up with to prevent it, the shooter will have a workaround,” Fox said, adding that over the past 35 years, there have been only five cases in which someone ages 18 to 20 used an assault rifle in a mass shooting.