Masking the memory of fear: Treating anxiety disorders such as PTSD with an opioid 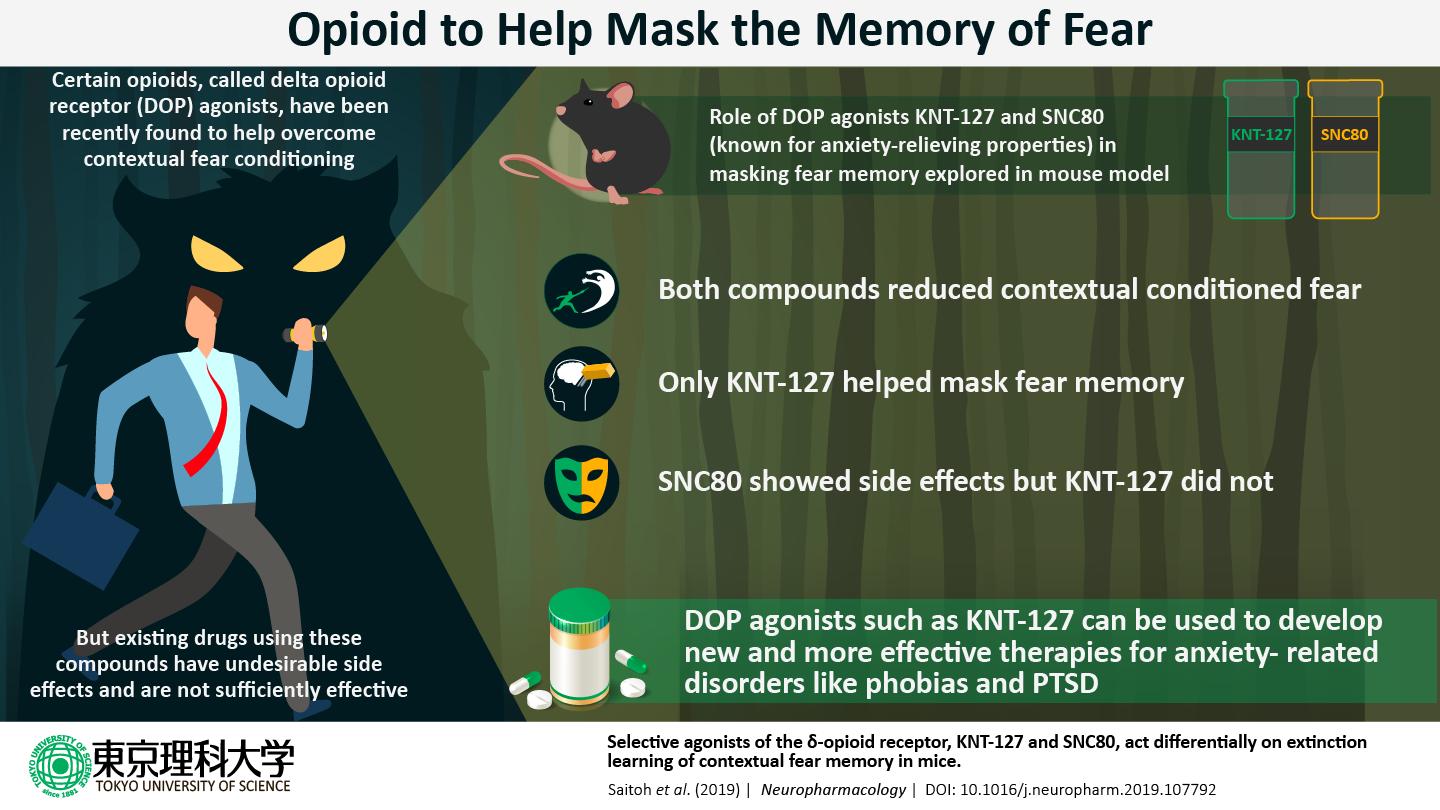 IMAGE: The potential of an opioid drug to help numb fear memory.

Anxiety disorders such as phobias and PTSD are fairly common problems in society. One of the prime causes of anxiety disorders is the inability to overcome the fear for certain contexts when they no longer apply. Attempts to facilitate this process of overcoming fear, therefore, has been the focus of recent efforts to treat anxiety disorders. These efforts have culminated in the discovery that certain opioid compounds, called delta opioid receptor (DOP) agonists, assist in masking fear memory. Consequently, DOP agonists have been at the center of clinical explorations in this area over the last decade.

In the thick of such clinical explorations, scientists from the Tokyo University of Science and the University of Tsukuba, Japan, led by Professor Akiyoshi Saitoh, first discovered the depression- and anxiety-relieving effects of DOP agonists. Subsequently, in a new study published inNeuropharmacology in 2019, they explored the potential of these agonists to help in the fear memory masking process. "We looked at the effects of DOP agonists on anxiety and fear memory, which have not been sufficiently studied so far," explains Prof Saitoh.

Prof Saitoh and team applied the "fear conditioning test" to mice in their laboratory. On day 1 of their experiment, they placed the mice in conditioning chambers and inflicted footshock on them at regular intervals. This was designed to induce fear for the chamber in the mice, who would henceforth associate the chamber with painful footshocks. On day 2, the mice were given either saline ("control" group), KNT-127, or SNC80 (both DOP agonists) and released into the conditioning chamber once again. They were not given any more footshocks. On day 3, they were given no drugs or saline but re-exposed to the conditioning chamber, to test their fear memory--or whether they remembered to be afraid. When mice are afraid, they freeze. On day 2, the mice on both drugs showed significantly less "freezing" behavior. On day 3, the mice on KNT-127 showed reduced freezing behavior, but those on SNC80 did not.

The scientists also examined the effects of these drugs on the activities of enzymes and pathways in the brain that are known to drive the masking of fear memory. They found that KNT-127 increased the levels of "phosphorylated" (or activated) molecules of an enzyme called ERK, which is involved in the ability to overcome fear conditioning in certain parts of the brain.

Taken together, these results suggest that although both KNT-127 and SNC80 reduce conditioned fear, only KNT-127 helps suppress contextual fear memory. Further, KNT-127 performs this role by increasing the levels of phosphorylated ERK in certain parts of the brain. So, both drugs reduce anxiety in the case of conditioned fear but do so via different pathways in the brain.

These observations and inferences are based on mice in a laboratory, but they clearly suggest new therapeutic possibilities for people. Prof Saitoh and Dr. Yamada say, "the fear conditioning test used in this study is also a model of PTSD. PTSD is a psychiatric disorder in which the memory (trauma) of anxiety and fear once experienced cannot be forgotten and thus impairs daily life, causing problems like insomnia and withdrawal. At present, the widely prescribed medication for PTSD takes several weeks to have therapeutic effects and is not satisfactory. There are also no potential breakthrough therapies for such disorders. Our study shows that DOP agonists, when used in combination with cognitive behavioral therapy, can enhance the efficacy of treatment for anxiety disorders. It offers hope for the realization of a safe and effective new mode of therapy for PTSD and other related psychiatric disorders."