March of the multiple penguin genomes 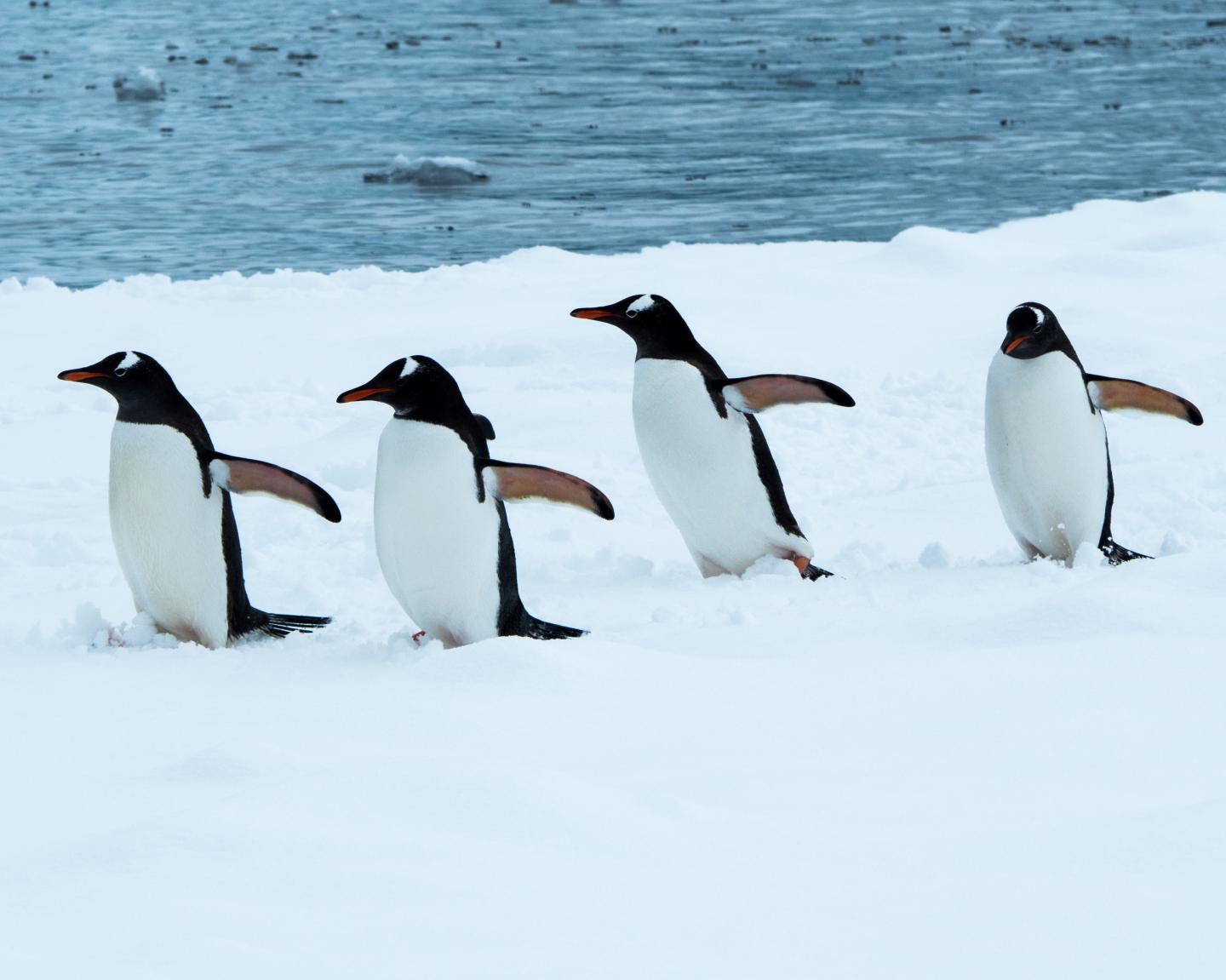 IMAGE: Gentoo Penguins in Antarctica form a line as they march down a 'penguin highway' to collect rocks for their nests.

Published today in the open-access journal GigaScience is an article that presents the first effort to capture the entirety of the genomic landscape of all living penguin species. The Penguin Genome Consortium --bringing together researchers from China, Denmark, New Zealand, Australia, Argentina, South Africa, the UK, the US, France and Germany-- has produced 19 high-coverage penguin genome sequences that, together with two previously published genomes, encompass all surviving penguin species. This extensive study provides an unparalleled amount of information that covers an entire biological order, which will promote research in a wide variety of areas from evolution to the impact of human activities and environmental changes.

Penguins are a diverse order of species that span the Southern hemisphere, ranging from the Galápagos Islands on the equator, to the oceanic temperate forests of New Zealand, to the rocky coastlines of the sub-Antarctic islands, finally reaching the sea-ice around Antarctica. This iconic bird group have transitioned from flying seabirds to powerful, flightless marine divers. With their specialized skin and feathers and an enhanced thermoregulation system they are able to inhabit environments from the extreme cold Antarctic sea ice to the tropical Galápagos Islands.

These birds also serve as the figurative "canary in a coal mine"; warning of environmental and climate change. Many penguin populations have experienced rapid declines in recent decades, some having extreme population drops, such as the crash of the King penguin population, which has declined by 88% in just 3 decades. And more penguin species are predicted to decline in the near future. The dwindling populations have been linked to climate warming, environmental degradation, exploitation of the marine environment, fisheries bycatch, pollution, and the introduction of exotic predators. Penguins have thus become the focus of many ecosystem monitoring studies. Having high-quality genomes sequences of all extant penguin species serves as an outstanding new resource for understanding the specific reasons for species population loss.

Author Theresa Cole from the University of Otago in New Zealand says of this work: "The population history of different penguin species can be seen in their genome. We will provide new insights into the population history of all penguins over dramatic climate events, to predict population trends under future climate change scenarios. This research will help us understand how future climate change may affect other species, to help us develop conservation strategies."

As with the work done on Darwin's finches, studying the radiation of the 20 penguin species provides similar enlightening case study for researching unique penguin morphological and physiological adaptations. The consortium are also sequencing the genomes of recently extinct penguin taxa, as well as undertaking population genomic studies using multiple genomes per species.

Senior author Guojie Zhang from the University of Copenhagen, BGI, and Kunming Institute of Zoology says of this: "The penguin ancestor experienced rapid radiation leading to the current approximate 20 extant species, accompanied by many ancient lineages that are now extinct. The radiation of penguin thus provides an excellent example for the study of speciation."

There were logistical challenges to get hold of high-quality specimens for all of these species as many come from some of the most inhospitable and far-flung corners of the globe. However, an additional challenge was cultural rather than technical. The process by which this consortium handled these sensitive issues serves as a model for building trust and collaboration with cultures that have equally important links to other native species.

Co-author Bruce McKinlay from the New Zealand Department of Conservation highlights this, saying: "Genome research in New Zealand is currently moving into novel cultural contexts, especially for penguins, which are Taonga or treasured possessions in Māori culture. As such, our consortium have undertaken rigorous indigenous consultation to sequence the genomes from six New Zealand Taonga species. We believe these genomes will be important for a cultural context."

The goal of the first stage of the Penguin Genome Consortium project was purely to sequence high-quality genomes, but initial validation studies have demonstrated these genomes are already producing valuable insight into evolutionary history of the penguin tree of life and the evolutionary patterns of their adaptation to Antarctica. For example, an initial phylogenetic tree presented in this study demonstrates that penguins have adapted to Antarctica on multiple occasions.

This and further comparative and evolutionary genomic analyses are currently being carried out, and the penguin genome consortium welcomes new members interested in joining the open consortium and contributing to this work. While this work is still underway early access to the 19 penguin genomes data has been provided, while the researchers ask groups intending to use this data for similar cross-species comparisons to follow the long running Fort Lauderdale and Toronto rules.