Gut microbes are well known to contribute to health and disease, but what has been less clear is how the host controls gut microbes. A study published January 13 in Cell Host & Microbe now reveals that mice and humans produce small molecules (microRNAs) from their GI tract, which are shed in feces, to regulate the composition of gut microbes and thereby protect against intestinal diseases such as colitis.

"Since gut microbes play an important role in host metabolism and immunity as well as in disease, it is important to understand the mechanisms by which the microbiota is regulated by the host and to identify ways in which to manipulate the microbiome," says senior study author Howard Weiner. "Our findings reveal a host defense mechanism and highlight microRNAs as a strategy for manipulation of the microbiome for the health of the host."

Based on past studies, Weiner and first author Shirong Liu, both of Brigham and Women's Hospital and Harvard Medical School, suspected that microRNAs might play a key role in this process. These small molecules regulate gene activity in a variety of species, from viruses to humans, and they have been implicated in intestinal diseases such as colorectal cancer. Moreover, they can enter and control gene expression in mitochondria--cell structures that originated evolutionarily from bacteria. 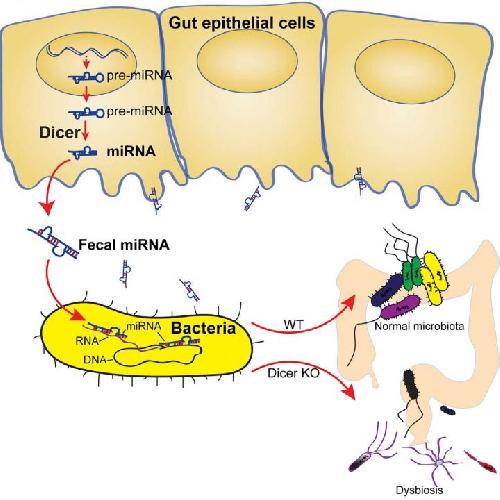 How the host shapes the microbiota isunclear. This visual abstract depicts the findings in Liu et al, who identify host miRNAswithin feces and show that these miRNAsare predominantly produced by gutepithelial cells and Hopx+ cells. ThesemicroRNAs can regulate bacterial geneexpression and growth, and their lossresults in imbalanced microbiota andexacerbated colitis. Credit: Liu et al./Cell Host & Microbe 2016

In the new study, the researchers found that microRNAs produced by intestinal cells in mice and humans enter bacteria, regulate the activity of bacterial genes, and shape the composition of gut microbes. Mice that were deficient in gut microRNAs showed an altered gut microbiome and were more susceptible to colitis. But transplantation of gut microRNAs from normal mice into the microRNA-deficient mice both restored the normal composition of gut microbes and protected against colon damage. The researchers are further investigating the underlying molecular mechanisms, with the hope of eventually applying these findings to the clinic.

"Our study suggests that the ability of the host to control gut microbes likely provided organisms with an evolutionary advantage, that is, the prevention of diseases such as colitis and colorectal cancer," Weiner says. "We are optimistic that it will one day be possible to harness this natural host defense mechanism by administering microRNAs as therapeutic compounds to improve health and treat disease."