Male sparrows are less intimidated by the songs of aging rivals 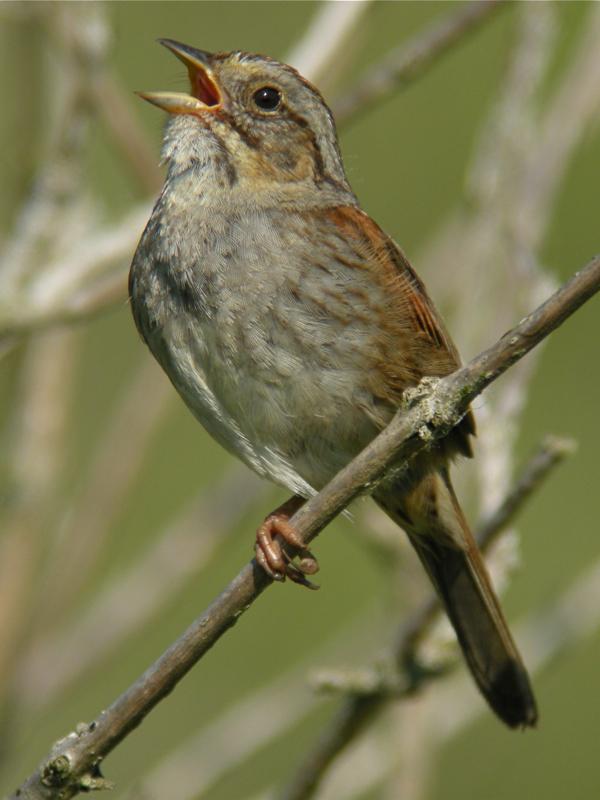 IMAGE: As they get up in years, male swamp sparrow songs don't strike fear like they used to.

DURHAM, N.C. -- Few singers reach their sunset years with the same voice they had in younger days. Singing sparrows are no different. Duke University-led research reveals that elderly swamp sparrows don't sound quite like they used to -- nor do they strike the same fear in other males who may be listening in.

Humans are remarkably good at guessing a person's age just by hearing their voice. But this is the first time the phenomenon has been demonstrated in wild animals, said Duke biology professor and study co-author Steve Nowicki.

The findings were published on January 7 in the journal Behavioral Ecology.

During the early spring, a male swamp sparrow stakes out a breeding territory and threatens any male who dares to trespass on his turf. If a potential rival enters another male's territory and starts to sing, the resident male says "Get out!" by singing back with a rapid weet-weet-weet and flying toward the intruder. Eventually, if all else fails, he attacks.

Previous research by this team showed that male swamp sparrows reach their peak as vocalists at age two, and start to decline after that, singing less frequently and less consistently as they get older.

To find out if other males take note of such changes, the team set up a speaker in the territories of 35 male swamp sparrows in a Pennsylvania marsh and played them 5-minute audio clips of stranger males recorded at age two and again at age 10.

The team measured the birds' responses, noting how closely each male approached the speaker. They found that males approached seven feet closer when they heard a potential rival's song recorded at age two than at age 10. This suggests that males are more aggressive towards younger-sounding rivals.

Males in their prime pose an obvious threat: if a resident male isn't assertive, there's a good chance that the other guy could steal his mates, said first author Matthew Zipple, a doctoral student at Duke. But apparently the song of a 10-year-old -- a centenarian in bird years -- doesn't warrant getting as worked up over.

If decreases in song quality in later life reflect the inevitable consequences of physical decline, the researchers believe that such changes could indicate to other males that a once-formidable male is no longer a match.

Whether song changes after mid-life make males more or less attractive to females is still unknown. "One interesting question would be, is the equation a little different from the female's point of view?" Nowicki said.

Males accumulate genetic mutations in their sperm as they age that could make them less desirable mates. On the flip side, Nowicki said, "The mere fact that he's lived this long means he must be doing something right."