Wild great apes are widely infected with malaria parasites. Yet, nothing is known about the biology of these infections in the wild. Using faecal samples collected from wild chimpanzees, an international team of researchers from the Max Planck Institute for Evolutionary Anthropology in Leipzig and the Robert Koch Institute in Berlin has now investigated the effect of the animals' age on malaria parasite detection rates. The data show a strong association between age and malaria parasite positivity, with significantly lower detection rates in adult chimpanzees. This suggests that, as in humans, individuals reaching adulthood have mounted an effective protective immunity against malaria parasites.

In malaria regions the parasite prevalence in the human body as well as malaria-related morbidity and mortality decrease with age. This reflects the progressive mounting of a protective immunity. Researchers of the Max Planck Institute for Evolutionary Anthropology and the Robert Koch Institute now present a study which addresses the age distribution of malaria parasite infection in a group of wild chimpanzees. 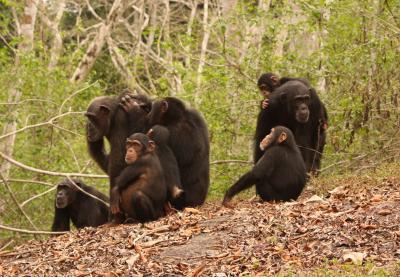 This is a group of chimpanzees, Taï National Park, Cote d'Ivoire.

To this end the researchers collected 141 faecal samples from seven female and 12 male wild chimpanzees from Taï National Park, Cote d'Ivoire. At time of sampling the animals' ages ranged between 3 and 47 years. The researchers extracted DNA from the faecal samples, analysed it and so identified the malaria parasite-positive samples. "In the course of this 2-month study almost every individual chimpanzee of the group was found positive at least once", says Hélène De Nys of the Max Planck Institute for Evolutionary Anthropology and the Robert Koch Institute. "Our data further suggest that at every point in time at least one individual of this chimpanzee group is infected".

Further analyses showed that malaria parasites were detected more often in younger than in older animals. Whether these were female or male, however, did not make a difference. "This is the first indication that epidemiological characteristics of malaria parasite infection in wild chimpanzee populations might be comparable to those in human populations", says Roman Wittig of the Max Planck Institute for Evolutionary Anthropology. "As in humans, the development of acquired immunity likely plays an important role in wild chimpanzees as well".

Throughout this process, malaria parasites might also contribute directly to decimating young chimpanzees. During analyses performed on more than 30 dead adult chimpanzees from the same community malaria could be excluded as the cause of death. For young chimpanzees, however, the question remains open. While it is known that mortality in young chimpanzees is high, their bodies are rarely accessible. This is because they are less likely to be found and because their carcasses are carried for several days by their mothers. "Even though at this stage, we cannot pinpoint pathogenicity of malaria parasites found in wild chimpanzees, our results suggest a continuous exposure of this population, leading to the development of a certain resistance to infection", says Fabian Leendertz of the Robert Koch Institute.