Make it yourself and save -- a lot

It may seem like a stretch to envision a 3D printer in every home. However, a Michigan Technological University researcher is predicting that personal manufacturing, like personal computing before it, is about to enter the mainstream in a big way.

3D printers deposit multiple layers of plastic or other materials to make almost anything, from toys to tools to kitchen gadgets. Free designs that direct the printers are available by the tens of thousands on websites like Thingiverse. Visitors can download designs to make their own products using open-source 3D printers, like the RepRap, which you build yourself from printed parts, or those that come in a box ready to print, from companies like Type-A Machines.

3D printers have been the purview of a relative few aficionados, but that is changing fast, Pearce said. The reason is financial: the typical family can already save a great deal of money by making things with a 3D printer instead of buying them off the shelf.

Pearce drew that conclusion after conducting a lifecycle economic analysis on 3D printing in an average American household.

In the study, Pearce and his team chose 20 common household items listed on Thingiverse. Then they used Google Shopping to determine the maximum and minimum cost of buying those 20 items online, shipping charges not included.

Next, they calculated the cost of making them with 3D printers. The conclusion: it would cost the typical consumer from $312 to $1,944 to buy those 20 things compared to $18 to make them in a weekend. 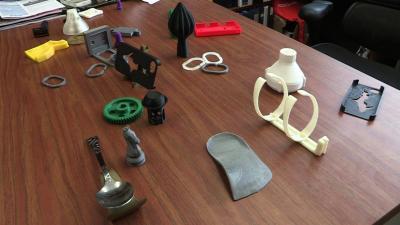 Pictured are some of the 20 things Joshua Pearce's group made for pennies on the dollar using 3-D printers.

Open-source 3D printers for home use have price tags ranging from about $350 to $2,000. Making the very conservative assumption a family would only make 20 items a year, Pearce's group calculated that the printers would pay for themselves quickly, in a few months to a few years.

The group chose relatively inexpensive items for their study: cellphone accessories, a garlic press, a showerhead, a spoon holder, and the like. 3D printers can save consumers even more money on high-end items like customized orthotics and photographic equipment.

3D printing isn't quite as simple as 2D printing a document from your home computer—yet. "But you don't need to be an engineer or a professional technician to set up a 3D printer," Pearce said. "Some can be set up in under half an hour, and even the RepRap can be built in a weekend by a reasonably handy do-it-yourselfer."

It's not just about the money. 3D printing may herald a new world that offers consumers many more choices as everything can be customized. "With the exponential growth of free designs and expansion of 3D printing, we are creating enormous potential wealth for everyone." explains Pearce.

Before 3D printers become as ubiquitous as cellphones, they could form the basis of small-scale manufacturing concerns and have huge potential both here and for developing countries, where access to many products is limited.

"It would be a different kind of capitalism, where you don't need a lot of money to create wealth for yourself or even start a business," Pearce said.

The study is described in the article "Life-Cycle Economic Analysis of Distributed Manufacturing with Open-Source 3D Printers," to be published in the journal Mechatronics and coauthored by Pearce; students Ben Wittbrodt, Alexandra Glover and John Loreto and lab supervisor Gerald Anzalone of Michigan Tech's Department of Materials Science and Engineering; Douglas Oppliger, Engineering Fundamentals lecturer; and John Irwin, an associate professor in the School of Technology and program chair of mechanical engineering technology. 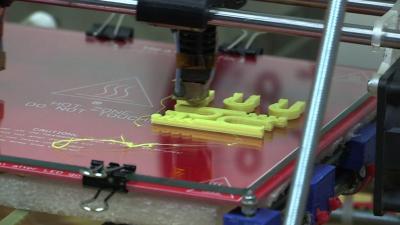 Three-dimensional printers deposit multiple thin layers of plastic and other materials to make a virtually infinite variety of designs, such as these parts for a 3-D printer.