Long-term memory helps chimpanzees in their search for food

Where do you go when the fruits in your favorite food tree are gone and you don't know which other tree has produced new fruit yet? An international team of researchers, led by Karline Janmaat from the Max Planck Institute for Evolutionary Anthropology in Leipzig, Germany, studied whether chimpanzees aim their travel to particular rainforest trees to check for fruit and how they increase their chances of discovering bountiful fruit crops. The scientists found that chimpanzees use long-term memory of the size and location of fruit trees and remember feeding experiences from previous seasons using a memory window which can be two months to three years ago.

For their study, the researchers recorded the behavior of five chimpanzee females for continuous periods of four to eight weeks, totaling 275 complete days, throughout multiple fruiting seasons in the Taï National Park, Côte d'Ivoire. They found that chimpanzees fed on significantly larger trees than other reproductively mature trees of the same species, especially if their fruits emitted an obvious smell. Interestingly, trees that were merely checked for edible fruit, but where monitoring could not have been triggered by smell, or the sound of fallen fruit, because the trees did not carry fruit, were also larger.

The researchers found that chimpanzees checked most trees along the way during travel, but 13% were approached in a goal-directed manner. These targeted approaches were unlikely initiated by visual cues and occurred more often when females foraged alone and when trees were large as opposed to small. The results suggested that their monitoring was guided by a long-term "what-where" memory of the location of large potential food trees. For their results, researchers analysed which of nearly 16000 potential food trees with different crown sizes were actually approached by the chimpanzees. 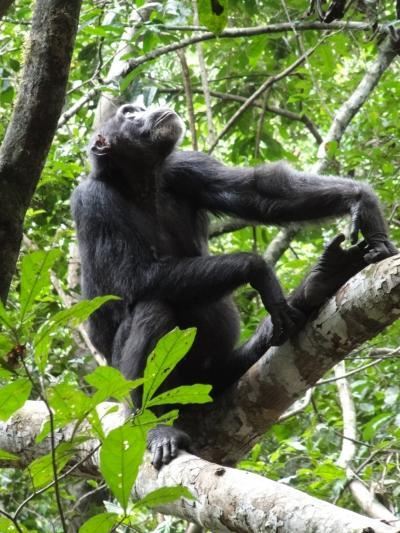 This is an image of an adult female chimpanzee inspecting a food tree.

Observations on one female, followed intensively over three consecutive summers, suggested that she was able to remember feeding experiences across fruiting seasons. Long-term phenological data on individual trees indicated that the interval between successive fruiting seasons, and hence the minimal "memory window" of chimpanzees required for effective monitoring activities, could vary from two months to three years.

"The present study on chimpanzees is the first to show that our close relatives use long-term memory during their search for newly produced tropical fruit, and remember feeding experiences long after trees have been emptied", says Karline Janmaat of the Max Planck Institute for Evolutionary Anthropology.

"For a long time people claimed that animals, contrary to humans, cannot remember the past. This study helps us to understand why chimpanzees and other primates should remember events over long periods in time. And guess what? It also shows they do!" says Christophe Boesch of the Max Planck Institute for Evolutionary Anthropology.