Epidural injections with a glucocorticoid in combination with the local anesthetic lidocaine appear to be no better in reducing pain and physical limitations in patients with spinal stenosis, a common spine disorder, than injections of lidocaine alone, a new study has found.

"Compared to injections with local anesthetic alone, injections with glucocorticoids provided these patients with minimal or no additional benefit." said lead author Dr. Janna L. Friedly, an assistant professor of rehabilitation medicine at the University of Washington.

The study, which appears in the July 3 issue of the New England Journal of Medicine, is the largest, double-blind, randomized clinical trial to look at the purported effectiveness of this commonly administered treatment. An editorial in the same issue comments on the research.

In the study, 400 patients with back and leg pain caused by lumbar spinal stenosis, a common cause of such pain in older adults, were randomly assigned to receive epidural injections containing either the local anesthetic alone or the anesthetic plus a glucocorticoids.

Lumbar spinal stenosis is often caused by age-related changes in the spine. The spinal canal narrows and compresses the nerves that run from the spinal cord to the back and legs. The compression can cause back and leg pain, as well as numbness, tingling, and weakness in the legs.

The condition is often treated with injections of local anesthetics plus corticosteroids into the epidural, or outermost, space of the spinal canal. It is estimated that over 2.2 million lumbar epidural injections are performed each year in the Medicare population.

The benefit of these injections has been believed to be due to the effects of the corticosteroids. Proponents of the treatment hypothesize that the glucocorticoids relieve pain by reducing swelling and inflammation around the compressed spinal nerves. However, the efficacy of the treatment has been in doubt because it has never before been evaluated in a large, multi-center, double-blind, randomized trial. 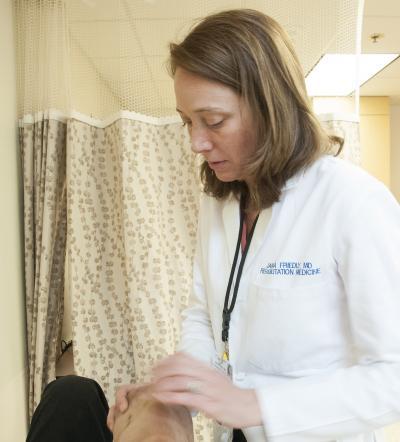 Dr. Janna Friedly, an assistant professor of rehabilitation medicine at the University of Washington in Seattle, examines a patient's leg and foot in her clinic.

The primary goal of the new study, called the Lumbar Epidural steroid injections for Spinal Stenosis (LESS) trial, was to determine whether there were any differences in pain or physical limitations six weeks after the injections between patients who received local anesthetic only versus patients who also received glucocorticoid. The researchers also looked several secondary outcomes including differences at three weeks, patient satisfaction, and depression.

The extent of pain and physical disability were assessed by asking patients to rate the intensity of their pain on a 0-10 scale and to complete a questionnaire that assesses physical limitations caused by back or leg pain, called the Roland-Morris Disability Questionnaire (RMDQ). Patients completed these measures before the injections and again at three and six weeks after receiving the injections.

The study was conducted at 16 medical centers across the United States. Neither the patients nor their doctors knew whether the injections contained the combination of glucocorticoid and lidocaine or lidocaine alone. The study was funded by the U.S. Agency for Healthcare Research and Quality.

The researchers found that symptoms improved in both groups. At three weeks, those who received glucocorticoid reported slightly less leg pain and slightly better function, but by six weeks there were no significant differences between the two groups in either pain or function.

The researchers speculate that the increased sense of satisfaction reported by these patients may have been due to small early benefit seen with corticosteroid injections at three weeks. Glucocorticoids are also known to improve mood and reduce the sense of fatigue. These effects may also have contributed to their feeling of satisfaction, the researchers said.

However, patients who received corticosteroids also reported more adverse events and were more likely to have low morning serum cortisol levels three and six weeks after the injections. This suggests that the corticosteroid was being absorbed in the general circulation and may have had broad systemic effects, the researchers note. Systemic effects of corticosteroids include reduced bone mineral density, increased risk of bone fractures, and immunosuppression.

The findings call into question the routine use of epidural injections for spinal stenosis, Friedly said. "If patients are considering an epidural injection, they should talk to their doctor about a lidocaine-only injection, given that corticosteroids do pose risks and this study found that they provided no significant added benefit at six weeks."

Additional studies are needed to ascertain whether the lidocaine-only injections are of any true benefit, Friedly added. "It's unclear how a short-acting anesthetic like lidocaine could have a sustained effect on pain and mobility," she said.