On a suggestion from a colleague, Jeri-Anne Lyons decided to test how the disease responded to a radical therapy – exposure to a certain wavelength of light called near-infrared (NIR).

"Never in a million years did I think it would help," says Lyons, an associate professor of biomedical sciences at the University of Wisconsin-Milwaukee (UWM), who studies the role of the immune response in MS.

But it did. In rodent models, early MS-like symptoms were treated with exposure to NIR light for a week, alternating with a week of no light. The clinical condition of the mice improved.

Professor Janis Eells, who shared the idea with Lyons, had the same initial reaction after she used NIR therapy on rats to treat blindness caused by poisoning, a condition thought to be permanent. Repeating experiments again and again, she found that certain doses of NIR light allowed lab animals to regain their sight.

Scientists have known for years that certain wavelengths of light in certain doses can heal, but they are only now uncovering exactly how it works, thanks in large part to three UWM faculty researchers, including Chukuka S. Enwemeka, dean of UWM's College of Health Sciences who is internationally known for his work in phototherapy.

Enwemeka researches the effects of both NIR and blue light in the visible range on healing wounds. Among his discoveries is that some wavelengths of blue light can clear stubborn infections – even MRSA, the antibiotic-resistant "superbug" form of Staphylococcus aureus.

Together, the UWM cluster has found that NIR and blue light repair tissue in dramatically different ways, but both act on the same enzyme in the cell's energy supply center: the mitochondria.

The studies have revealed key information about managing the effects of aging and disease.

So how is light accomplishing such wonders?

In applying NIR light therapy to MS, Lyons has identified the right timing and dose. But she's also dug deeper, analyzing the effect the light had on the activities of the animal's genes. It turns out, molecules that would make the disease worse were weakened after exposure to the light, and the ones responsible for improvement were strengthened. 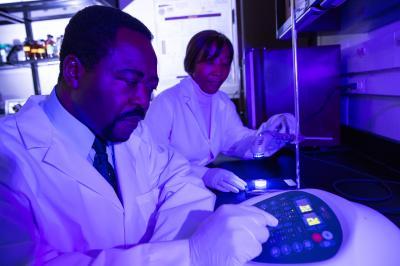 Light can do all that?

"We're not talking about white light [all wavelengths in the visible spectrum combined] as treatment, but only certain wavelengths, at a certain intensity, for a certain amount of time," says Lyons. "Like ingested medication, it's all about the dose."

Determining the best wavelength of light for phototherapy is a difficult task. Studies show that 670 nanometer (nm) and 830 nm light are beneficial, but 730 nm is not. The other difficult task is determining the appropriate dose and dose regimen for delivering the light.

Even more exciting is phototherapy's potential to improve a host of other degenerative diseases. Damaged mitochondria lead to a rise in destructive "free radicals," which play a key role in aging and cancer.

"It's why we try to put antioxidants into our diets," says Lyons, "to fight that process."

One source of free radicals comes from the inflammation caused by the body's immune response. The researchers have found that after an injury or illness triggers the immune response, NIR light resets the mitochondria so they function normally again.

"NIR reduces inflammation," says Eells. "If you can tone down the inflammation in an eye disease like retinitis pigmentosa, you slow the progression of the disease."

A similar observation with inflammation occurred in a study on recalcitrant bedsores, she adds. Wounds treated with phototherapy healed two and a half times more quickly than untreated wounds.

"Chronic non-healing wounds are 'stuck' in the inflammatory phase of wound healing" The light removes that obstacle," says Eells.

She has been working with Tim Kern at Case Western Reserve in treating an animal model of diabetic retinopathy with NIR light, which has been shown to slow progression and reduce the severity of the condition. Kern hopes to initiate a clinical trial in the near future.

NIR light heals by ensuring that cytochrome oxidase binds with oxygen to turn on protectors and stimulate cell metabolism. Blue light, on the other hand, causes a toxic environment when the immune response has been triggered. That poisonous effect hastens healing of topical wounds by killing bacteria that cause infection.

The question is, "What gives light in the longer wavelength its antibiotic effect?"

Enwemeka's studies suggest that blue light also acts on the mitochondrial enzyme site, but allows cytochrome oxidase to bind with nitric oxide, a free radical that is elevated in the immune response. It's a pairing that poisons the invader.

This theory is still unproven, but the therapy has achieved undeniable results in the lab with antibiotic-resistant MRSA. Enwemeka demonstrated that one dose of irradiation killed as much as 92 percent of two pervasive strains of MRSA.

He is working to improve that success rate by getting the light to penetrate deeper in order to finish off the few colonies that survive irradiation.

Enwemeka is leading a research effort in Brazil and at UWM that he hopes will ultimately lead to clinical use of NIR and blue light in the U.S. for the treatment of wounds.

In the six years since he was asked to test the effects of blue light on MRSA, he says, research on the topic has picked up. But currently, the U.S. Food and Drug Administration (FDA) has not sanctioned the use of blue light in treating wounds, or NIR light for conditions other than wounds and pain.

With so much success, why isn't phototherapy being used more widely?

"It's considered alternative therapy in Western medicine. It seems too simple for people to accept," says Lyons.

What the FDA is waiting for, says Enwemeka, is confirmation from a large-scale clinical study before approving phototherapy for a wider variety of ailments. It's something Enwemeka and Harry Whelan, a UWM alumnus and physician-researcher at the Medical College of Wisconsin, are determined to accomplish.

"To see people who have not had relief see their wounds heal and not return," says Enwemeka of the Brazilian patients who have benefited from therapy, "is very touching." 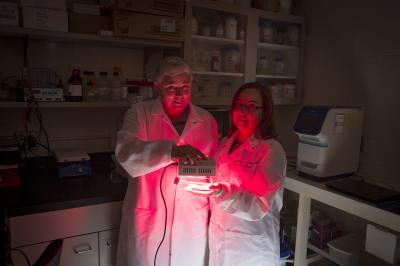 Janis Eells (left) and Jeri-Ann Lyons, professor and associate professor of biomedical sciences at UWM, irradiate cells with NIR light, which has been shown to have beneficial effects on cell function.