Let it snow: Researchers put cloud seeding to the test 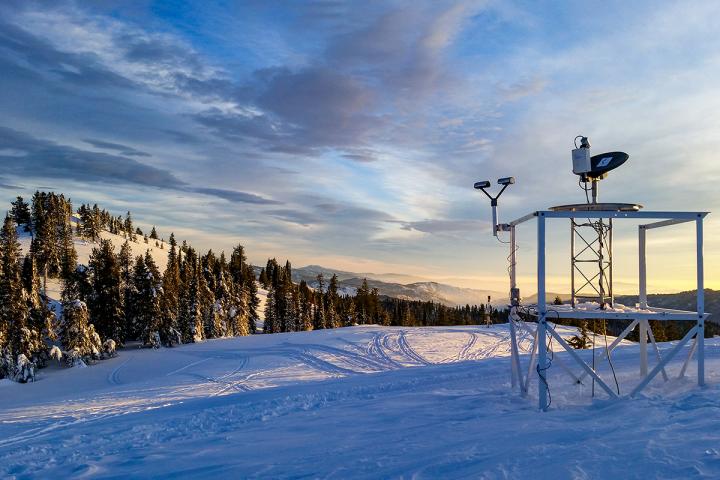 IMAGE: A suite of meteorological instrumentation used in the study, including a micro-rain radar.

CHAMPAIGN, Ill. -- Cloud seeding has become an increasingly popular practice in the western United States, where states grapple with growing demands for water. Measuring how much precipitation cloud seeding produces has been a longstanding challenge. Researchers have developed a way to use radar and other tools to more accurately measure the volume of snow produced through cloud seeding.

The findings of the multi-institution study, co-written by University of Illinois at Urbana-Champaign professor Robert Rauber, are published in the Proceedings of the National Academy of Sciences.

In January 2019, a team led by University of Colorado, Boulder atmospheric scientist Katja Friedrich seeded clouds and tracked the associated snowfall over western Idaho. They fired flares composed of silver iodide from an airplane to inject microscopic particles into already-formed clouds to encourage water droplets to freeze into ice crystals.

"Ice particles grow rapidly and fall within clouds," said Rauber, a professor of atmospheric sciences and director of the School of Earth, Society and Environment at Illinois. "The goal was to generate more snow than might normally fall on the mountain slopes."

"We tracked the seeding plume from the time we put it into the cloud until it generated snow that reached the ground," said Friedrich, a professor of atmospheric and oceanic sciences at CU Boulder.

In all, the cloud seeding event and two more that month produced a total of about 282 Olympic-sized swimming pools worth of water in the form of snow.

"Even if you can generate a little bit more snow, that helps us in the long run," Friedrich said. "This is an important first step toward better understanding just how efficient cloud seeding can be at creating those winter wonderlands."

It is tricky to get a good sense of just how effective cloud seeding really is, the researchers said, which is why most statistics lead to inconclusive results. Estimates range anywhere from zero to 50% additional snowfall.

To overcome this obstacle, the group used two special mountaintop radars to peer into the clouds as the snow inside grew and succumbed to gravity. Based on the team's calculations, snow fell from those clouds for about 67 minutes, dusting roughly 900 square miles of land in about a tenth of a millimeter of snow.

"If we hadn't seeded these particular clouds, they would not have produced any precipitation," Friedrich said.

The researchers said it is too early to predict how useful cloud seeding might be in all mountain clouds moving forward - every winter storm is different and interacts with the seeded particles in different ways. However, the group's findings could get scientists closer to being able to make those cost-benefit calculations.

"We can now finally put a number on how much water we can produce through cloud seeding," Friedrich said.