A study of 473 sets of twins followed since birth found that compared to single-born children, 47 percent of 24-month-old identical twins had language delay compared to 31 percent of non-identical twins. Overall, twins had twice the rate of late language emergence of single-born children. None of the children had disabilities affecting language acquisition.

The results of the study were published in the June 2014 Journal of Speech, Language, and Hearing Research.

University of Kansas Distinguished Professor Mabel Rice, lead author, said that all of the language traits analyzed in the study—vocabulary, combining words and grammar—were significantly heritable with genes accounting for about 43 percent of the overall twins' deficit.

The "twinning effect"—a lower level of language performance for twins than single-born children—was expected to be comparable for both kinds of twins, but was greater for identical twins, said Rice, strengthening the case for the heritability of language development.

"This finding disputes hypotheses that attribute delays in early language acquisition of twins to mothers whose attention is reduced due to the demands of caring for two toddlers," said Rice. "This should reassure busy parents who worry about giving sufficient individual attention to each child."

However, said Rice, prematurity and birth complications, more common in identical twins, could also affect their higher rates of language delay. A study of pregnancy and birth risks for late talking in twins is currently underway by the study authors. 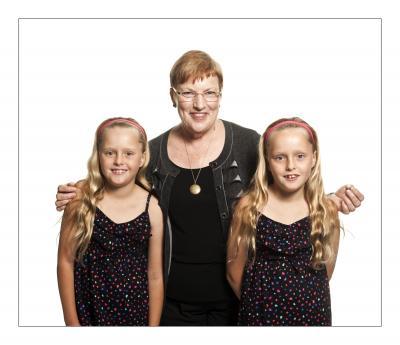 University of Kansas Distinguished Professor Mabel Rice directs a longitudinal study of language development in 1,000 sets of Australian twins from birth through adolescence.

Further, the study will continue at least until 2017 to continue to follow the twins through preschool and school years up to adolescence to answer the question of whether late-talking twins do catch up to their peers.

Late language emergence means that a child's language is below age and gender expectations in the number of words they speak and combining two or more words into sentences. In this study 71 percent of two-year-old twins were not combining words compared to 17 percent of single-born children.

While previous behavioral genetics studies of toddlers have largely focused on vocabulary, the researchers introduced an innovative measure of early grammatical ability on the correct use of the past tense and the "to be" and "to do" verbs. The measure was inspired by the Rice/Wexler Test of Early Grammar Impairment, developed by Rice and Massachusetts Institute of Technology Professor Kenneth Wexler in 2001. It was the first test to detect the subtle but common language disorder, Specific Language Impairment.

Rice's collaborators in the international longitudinal project that began in 2002 are Professors Cate Taylor and Stephen Zubrick from the Telethon Kids Institute in Perth, Western Australia, and Professor Shelley Smith at the University of Nebraska Medical Center.

The study population is located in the vicinity of Perth, Western Australia, because it is demographically practically identical to Kansas City and several other U.S. Midwestern states. But in Australia health records are available and the Western Australia Twin Registry is a unique resource for researchers since it is a record of all multiple births, said Rice.

The research group has followed the development of 1000 sets of Western Australian twins from their first words. In 2012, the group was granted $2.8 million by the National Institute for Deafness and Other Communication Disorders for a fourth five-year-cycle that will enable researchers to continue to monitor the twins as they develop through adolescence. In addition to formal language tests, researchers have collected genetic and environmental data as well as assessments with the twins' siblings.