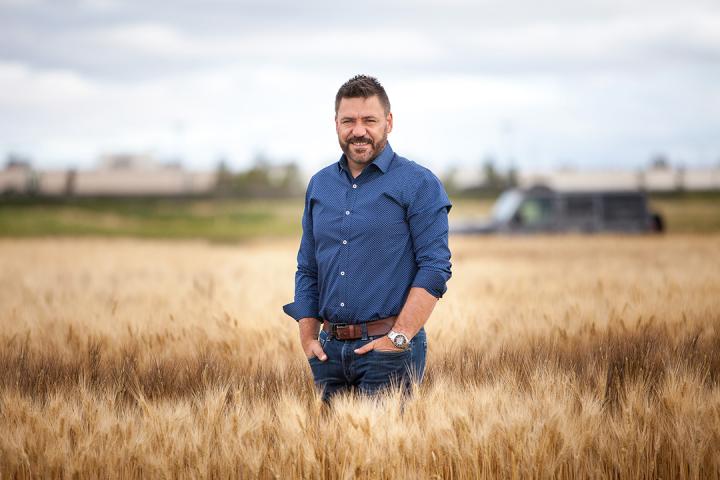 SASKATOON - In a landmark discovery for global wheat production, a University of Saskatchewan-led international team has sequenced the genomes for 15 wheat varieties representing breeding programs around the world, enabling scientists and breeders to much more quickly identify influential genes for improved yield, pest resistance and other important crop traits.

The research results, just published in Nature, provide the most comprehensive atlas of wheat genome sequences ever reported. The 10+ Genome Project collaboration involved more than 95 scientists from universities and institutes in Canada, Switzerland, Germany, Japan, the U.K., Saudi Arabia, Mexico, Israel, Australia, and the U.S.

"It's like finding the missing pieces for your favorite puzzle that you have been working on for decades," said project leader Curtis Pozniak, wheat breeder and director of the USask Crop Development Centre (CDC). "By having many complete gene assemblies available, we can now help solve the huge puzzle that is the massive wheat pan-genome and usher in a new era for wheat discovery and breeding."

Scientific groups across the global wheat community are expected to use the new resource to identify genes linked to in-demand traits, which will accelerate breeding efficiency.

"This resource enables us to more precisely control breeding to increase the rate of wheat improvement for the benefit of farmers and consumers, and meet future food demands," Pozniak said.

One of the world's most cultivated cereal crops, wheat plays an important role in global food security, providing about 20 per cent of human caloric intake globally. It's estimated wheat production must increase by more than 50 per cent by 2050 to meet an increasing global demand.

In 2018 as part of another international consortium, USask researchers played a key role in decoding the genome for the bread wheat variety Chinese Spring, the first complete wheat genome reference and a significant technical milestone. The findings were published in the journal Science.

"Now we have increased the number of wheat genome sequences more than 10-fold, enabling us to identify genetic differences between wheat lines that are important for breeding," Pozniak said. "We can now compare and contrast the full complement of the genetic differences that make each variety unique."

Nils Stein of the Leibniz Institute of Plant Genetics and Crop Plant Research (IPK) and project co-leader from Germany said, "Given the significant impact of the Chinese Spring reference genome on research and application, it is a major achievement that just two years later we are providing additional sequence resources that are relevant to wheat improvement programs in many different parts of the world."

The 10+ Genome study represents the start of a larger effort to generate thousands of genome sequences of wheat, including genetic material brought in from wheat's wild relatives.

The research team was able to track the unique DNA signatures of genetic material incorporated into modern cultivars from several of wheat's undomesticated relatives by breeders over the century.

"These wheat relatives have been used by breeders to improve disease resistance and stress resistance of wheat," said Pozniak. "One of these relatives contributed a DNA segment to modern wheat that contains disease-resistant genes and provides protection against a number of fungal diseases. Our collaborators from Kansas State University and CIMMYT (Mexico) showed that this segment can improve yields by as much as 10 per cent. Since breeding is a continual improvement process, we can continue to cross plants to select for this valuable trait."

Pozniak's team, in collaboration with scientists from Agriculture and Agri-Food Canada and National Research Council of Canada, also used the genome sequences to isolate an insect-resistant gene (called Sm1) that enables wheat plants to withstand the orange wheat blossom midge, a pest which can cause more than $60 million in annual losses to Western Canadian producers.

"Understanding a causal gene like this is a game-changer for breeding because you can select for pest resistance more efficiently by using a simple DNA test than by manual field testing," Pozniak said.

The USask team also included the paper's first author Sean Walkowiak (formerly with Pozniak's team and now with the Canadian Grain Commission), computer scientist Carl Gutwin who developed visualization software and a user-friendly database to compare the genome sequences, and Andrew Sharpe, director of genomics and bioinformatics at the USask Global Institute for Food Security, who did sequencing work through the Omics and Precision Agriculture Laboratory (OPAL), a state-of-the-art laboratory that provides genomics, phenomics and bioinformatics services.

The 10+ Genome Project was sanctioned as a top priority by the Wheat Initiative, a co-ordinating body of international wheat researchers.

"This project is an excellent example of co-ordination across leading research groups around the globe. Essentially every group working in wheat gene discovery, gene analysis and deployment of molecular breeding technologies will use the resource," said Wheat Initiative Scientific Co-ordinator Peter Langridge.

"This project is a prime example of how genomics can support increased resilience in food production and strengthen Canada's export leadership," said Genome Canada President and CEO Rob Annan.

"Deploying genomics to adapt agricultural production to climate change, address food and nutritional insecurity, and improve crop health is good for farmers and consumers, and our economy will see tangible returns from this research. Genome Canada is immensely proud of the exceptional work by the Canadian researchers and their international collaborators, which underscores the potential of genomics to make a positive impact on the lives of Canadians and others around the world."