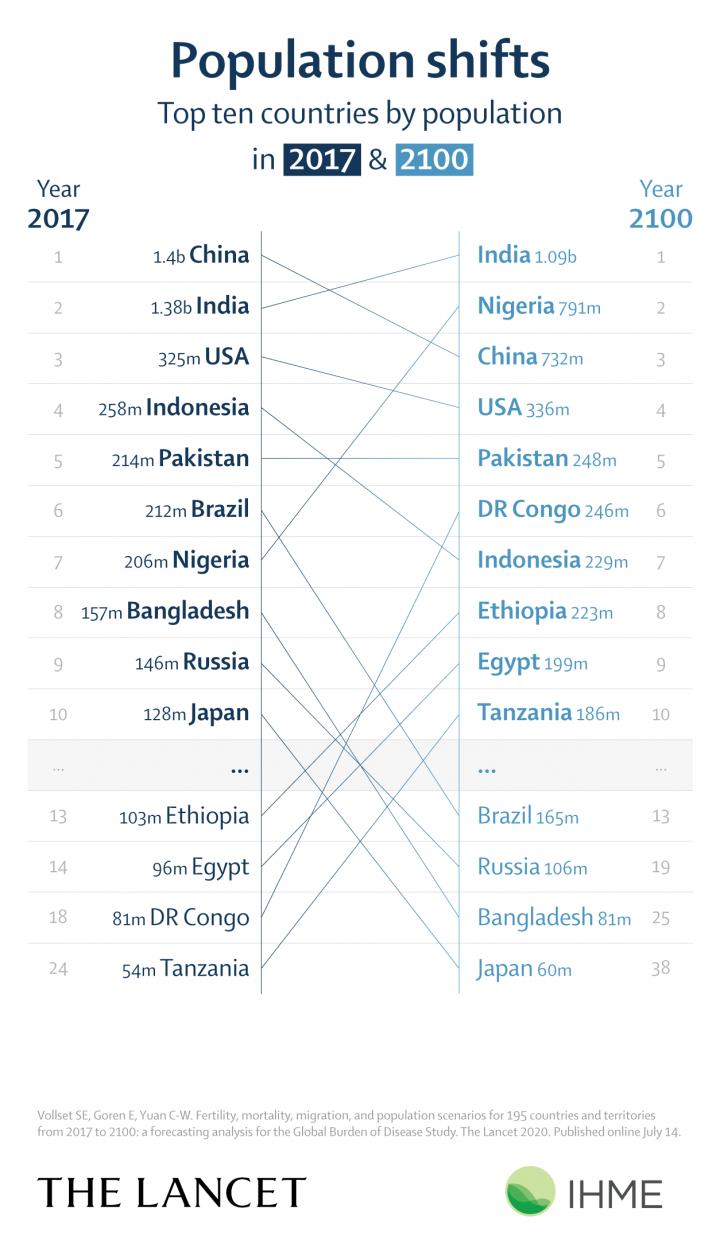 The USA is projected to have population growth until just after mid-century (364 million in 2062), followed by a moderate decline of less than 10% to 336 million by 2100--the world's fourth most populous country.

The USA's total fertility rate--which represents the average number of children a woman delivers over her lifetime--is predicted to steadily decline from 1.8 in 2017 to 1.5 in 2100; well below the minimum birth rate (2.1) considered necessary to maintain existing population levels long-term without immigration.

In 2100, the USA is forecasted to have the fourth largest working-age population in the world (around 181 million), after India, Nigeria, and China (figure 8)--with immigration likely sustaining the US workforce, with the largest net immigration in absolute numbers (more than half a million more people are estimated to immigrate to the USA in 2100 than will emigrate out). However, the researchers warn that US liberal immigration policies have faced a political backlash in recent years, threatening the country's potential to sustain population and economic growth.

By 2100, projected fertility rates in 183 of 195 countries will not be high enough to maintain current populations without liberal immigration policies.

World population forecasted to peak in 2064 at around 9.7 billion people and fall to 8.8 billion by century's end, with 23 countries seeing populations shrink by more than 50%, including Japan, Thailand, Italy, and Spain.

Dramatic declines in working age-populations are predicted in countries such as India and China, which will hamper economic growth and lead to shifts in global powers.

Authors warn response to population decline must not compromise progress on women's freedom and reproductive rights.

Improvements in access to modern contraception and the education of girls and women are generating widespread, sustained declines in fertility, and world population will likely peak in 2064 at around 9.7 billion, and then decline to about 8.8 billion by 2100--about 2 billion lower than some previous estimates [1], according to a new study published in The Lancet.

The modelling research uses data from the Global Burden of Disease Study 2017 to project future global, regional, and national population. Using novel methods for forecasting mortality, fertility, and migration, the researchers from the Institute for Health Metrics and Evaluation (IHME) at the University of Washington's School of Medicine estimate that by 2100, 183 of 195 countries will have total fertility rates (TFR), which represent the average number of children a woman delivers over her lifetime, below replacement level of 2.1 births per woman. This means that in these countries populations will decline unless low fertility is compensated by immigration.

The new population forecasts contrast to projections of 'continuing global growth' by the United Nations Population Division [1], and highlight the huge challenges to economic growth of a shrinking workforce, the high burden on health and social support systems of an ageing population, and the impact on global power linked to shifts in world population.

The new study also predicts huge shifts in the global age structure, with an estimated 2.37 billion individuals over 65 years globally in 2100, compared with 1.7 billion under 20 years, underscoring the need for liberal immigration policies in countries with significantly declining working age populations.

"Continued global population growth through the century is no longer the most likely trajectory for the world's population", says IHME Director Dr. Christopher Murray, who led the research. "This study provides governments of all countries an opportunity to start rethinking their policies on migration, workforces and economic development to address the challenges presented by demographic change." [2]

IHME Professor Stein Emil Vollset, first author of the paper, continues, "The societal, economic, and geopolitical power implications of our predictions are substantial. In particular, our findings suggest that the decline in the numbers of working-age adults alone will reduce GDP growth rates that could result in major shifts in global economic power by the century's end. Responding to population decline is likely to become an overriding policy concern in many nations, but must not compromise efforts to enhance women's reproductive health or progress on women's rights." [2]

Dr Richard Horton, Editor-in-Chief, The Lancet, adds: "This important research charts a future we need to be planning for urgently. It offers a vision for radical shifts in geopolitical power, challenges myths about immigration, and underlines the importance of protecting and strengthening the sexual and reproductive rights of women. The 21st century will see a revolution in the story of our human civilisation. Africa and the Arab World will shape our future, while Europe and Asia will recede in their influence. By the end of the century, the world will be multipolar, with India, Nigeria, China, and the US the dominant powers. This will truly be a new world, one we should be preparing for today." [2]

The global TFR is predicted to steadily decline, from 2.37 in 2017 to 1.66 in 2100--well below the minimum rate (2.1) considered necessary to maintain population numbers (replacement level)-- with rates falling to around 1.2 in Italy and Spain, and as low as 1.17 in Poland.

Even slight changes in TFR translate into large differences in population size in countries below the replacement level--increasing TFR by as little as 0.1 births per woman is equivalent to around 500 million more individuals on the planet in 2100.

Much of the anticipated fertility decline is predicted in high-fertility countries, particularly those in sub-Saharan Africa where rates are expected to fall below the replacement level for the first time--from an average 4.6 births per woman in 2017 to just 1.7 by 2100. In Niger, where the fertility rate was the highest in the world in 2017--with women giving birth to an average of seven children--the rate is projected to decline to around 1.8 by 2100.

Nevertheless, the population of sub-Saharan Africa is forecast to triple over the course of the century, from an estimated 1.03 billion in 2017 to 3.07 billion in 2100--as death rates decline and an increasing number of women enter reproductive age. North Africa and the Middle East is the only other region predicted to have a larger population in 2100 (978 million) than in 2017 (600 million).

As fertility falls and life expectancy increases worldwide, the number of children under 5 years old is forecasted to decline by 41% from 681 million in 2017 to 401 million in 2100, whilst the number of individuals older than 80 years is projected to increase six fold, from 141 million to 866 million. Similarly, the global ratio of adults over 80 years to each person aged 15 years or younger is projected to rise from 0.16 in 2017 to 1.50 in 2100, in countries with a population decline of more than 25%.

Furthermore, the global ratio of non-working adults to workers was around 0.8 in 2017, but is projected to increase to 1.16 in 2100 if labour force participation by age and sex does not change.

"While population decline is potentially good news for reducing carbon emissions and stress on food systems, with more old people and fewer young people, economic challenges will arise as societies struggle to grow with fewer workers and taxpayers, and countries' abilities to generate the wealth needed to fund social support and health care for the elderly are reduced", says Vollset. [2]

The study also examined the economic impact of fewer working-age adults for all countries in 2017. While China is set to replace the USA in 2035 with the largest total gross domestic product (GDP) globally, rapid population decline from 2050 onward will curtail economic growth. As a result, the USA is expected to reclaim the top spot by 2098, if immigration continues to sustain the US workforce (figure 9).

Sub-Saharan Africa is likely to become an increasingly powerful continent on the geopolitical stage as its population rises. Nigeria is projected to be the only country among the world's 10 most populated nations to see its working-age population grow over the course of the century (from 86 million in 2017 to 458 million in 2100), supporting rapid economic growth and its rise in GDP rankings from 23rd place in 2017 to 9th place in 2100 (figure 8).

While the UK, Germany, and France are expected to remain in the top 10 for largest GDP worldwide at the turn of the century, Italy (from rank 9th in 2017 to 25th in 2100) and Spain (from 13th to 28th) are projected to fall down the rankings, reflecting much greater population decline (figure 9).

The study also suggests that population decline could be offset by immigration, with countries that promote liberal immigration better able to maintain their population size and support economic growth, even in the face of declining fertility rates.

The model predicts that some countries with fertility lower than replacement level, such as the USA, Australia, and Canada, will probably maintain their working-age populations through net immigration (see appendix 2 section 4). Although the authors note that there is considerable uncertainty about these future trends.

"For high-income countries with below-replacement fertility rates, the best solutions for sustaining current population levels, economic growth, and geopolitical security are open immigration policies and social policies supportive of families having their desired number of children", Murray says. "However, a very real danger exists that, in the face of declining population, some countries might consider policies that restrict access to reproductive health services, with potentially devastating consequences. It is imperative that women's freedom and rights are at the top of every government's development agenda." [2]

The authors note some important limitations, including that while the study uses the best available data, predictions are constrained by the quantity and quality of past data. They also note that past trends are not always predictive of what will happen in the future, and that some factors not included in the model could change the pace of fertility, mortality, or migration. For example, the COVID-19 pandemic has affected local and national health systems throughout the world, and caused over half a million deaths. However, the authors believe the excess deaths caused by the pandemic are unlikely to significantly alter longer term forecasting trends of global population.

Writing in a linked Comment, Professor Ibrahim Abubakar, University College London (UCL), UK, and Chair of Lancet Migration (who was not involved in the study) [3], says:"Migration can be a potential solution to the predicted shortage of working-age populations. While demographers continue to debate the long-term implications of migration as a remedy for declining TFR, for it to be successful, we need a fundamental rethink of global politics. Greater multilateralism and a new global leadership should enable both migrant sending and migrant-receiving countries to benefit, while protecting the rights of individuals. Nations would need to cooperate at levels that have eluded us to date to strategically support and fund the development of excess skilled human capital in countries that are a source of migrants. An equitable change in global migration policy will need the voice of rich and poor countries. The projected changes in the sizes of national economies and the consequent change in military power might force these discussions."

He adds: "Ultimately, if Murray and colleagues' predictions are even half accurate, migration will become a necessity for all nations and not an option. The positive impacts of migration on health and economies are known globally. The choice that we face is whether we improve health and wealth by allowing planned population movement or if we end up with an underclass of imported labour and unstable societies. The Anthropocene has created many challenges such as climate change and greater global migration. The distribution of working-age populations will be crucial to whether humanity prospers or withers."