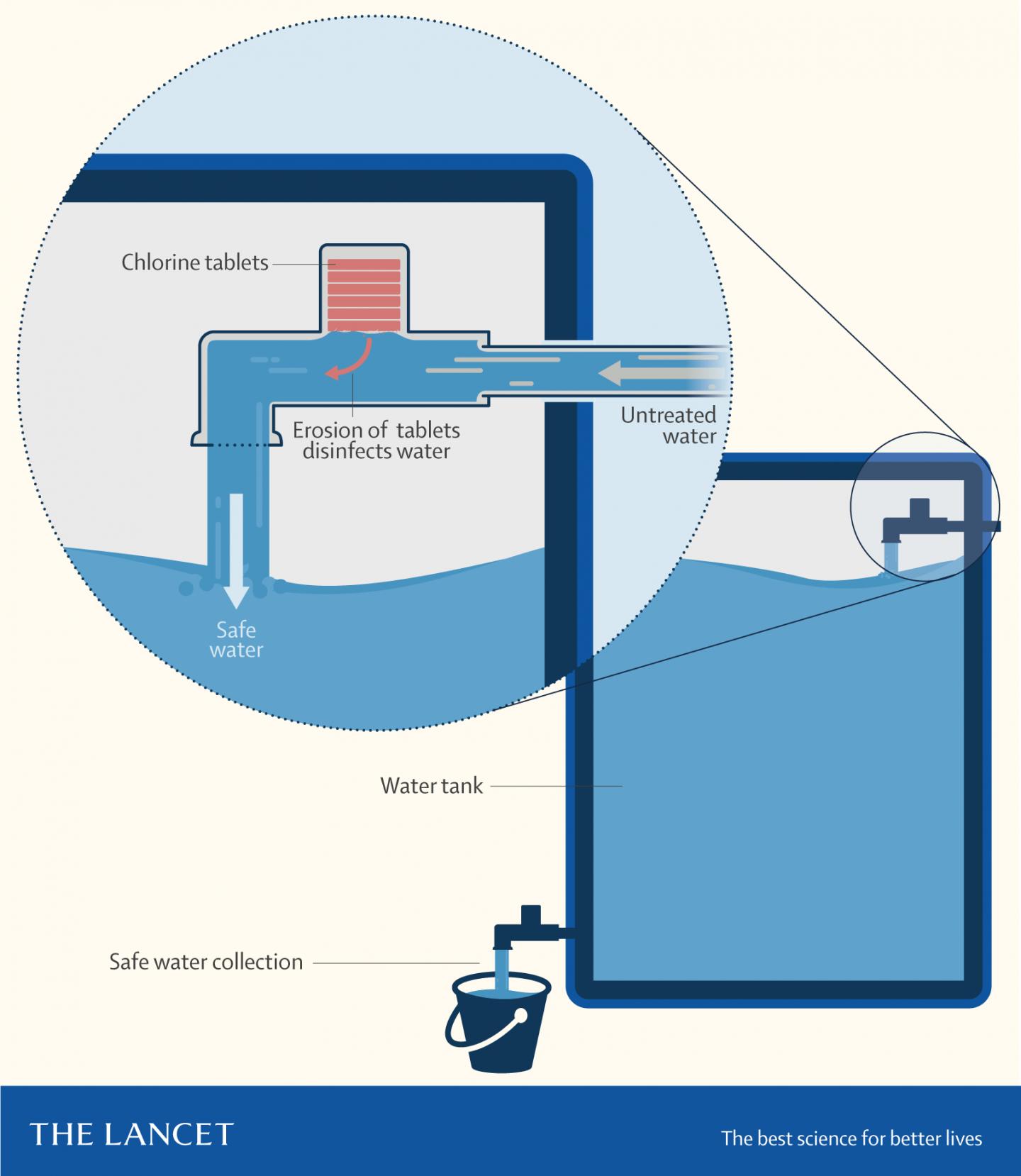 A novel water treatment device that delivers chlorine automatically via public taps without the need for electricity, reduced child diarrhoea by 23% compared with controls (156 cases out of 2,073 child measurements [7.5%] vs 216/2,145 [10%]) over 14 months in two urban neighbourhoods of Bangladesh, according to a randomised trial following more than 1,000 children published in The Lancet Global Health journal.

Clean water is still a major problem in poor urban communities in low-income countries, where contamination by bacteria can lead to high rates of diarrhoeal diseases such as cholera and typhoid, harming children's health and growth. Worldwide, an estimated one billion people who have access to piped water are drinking water that does not meet international safety standards.

Most previous research has focused on household-level water treatment interventions that require people to calculate the correct dosage and add their own chlorine daily--but these have had low uptake and failed to reduce diarrhoea, partly because they deliver a chlorine dose that makes chlorinated water taste and smell unpleasant.

"Chlorination is one of the cheapest and most widely available methods to make drinking water safe, but poor taste and bad smell of chlorinated water are major barriers to adoption," explains co-author Dr Sonia Sultana from icddr,b (International Centre for Diarrhoeal Diseases Research, Bangladesh). "Our findings indicate that automated chlorine dosing below the taste detection threshold has the potential to be transformative by ensuring high adoption rates and will hopefully help progress towards the global target of universal access to safe and affordable drinking water." [1]

Although one of the first field trials of this new technology, the authors say that chlorinating water at the point-of-collection could be an effective, scalable strategy in low-income urban settings to reduce diarrhoeal diseases. More research will be needed to determine where this technology should be implemented to maximise health benefits, as the intervention was more effective in Bangladesh's capital city Dhaka city than in Tongi on the outskirts of the city.

"This novel, low-cost technology requires no behaviour change or effort by users--safe water comes straight out of the tap," says Dr Amy Pickering from Tufts University, USA who led the research. "This point-of-collection approach to water treatment could be a transformative strategy for reducing gastrointestinal disease burden in low-income urban communities. We are now expanding the project to roadside water stands in Kenya, and working on a business model that could work in other countries." [1]

In this study, researchers used a novel treatment device that automatically dispenses small amounts of chlorine to water from public taps and shared hand pumps. In the device, water flows past solid tablets of chlorine which dissolve into the water to treat it (see infographic).

Identical dispensers were installed at 100 shared water points in two low-income neighbourhoods in Bangladesh (Dhaka and Tongi) fed by piped water that is delivered intermittently, as is common in low-income settings. Water points were randomly assigned to have their drinking water automatically chlorinated (intervention) or to be treated with vitamin C (control group).

Between July 2015 and November 2015, 920 households with at least one child under the age of 5 years were assigned to the chlorine treatment (50 water points; 517 children) or control groups (50 water points; 519 children). Because of high migration, children could transfer into or out of the shared water points.

Every 2-3 months during the 14-month follow up period, caregiver-reported child diarrhoea (3 or more loose or watery stools in 24 hours) was measured alongside household and tap water quality (microbes, taste, smell), child weight, acute respiratory illness, and the presence of sufficient chlorine residual to prevent recontamination by dirty containers, utensils, or hands.

Before the trial began, the authors identified the concentration of chlorine that would be below the taste detection threshold for most residents, ensuring participants would not know which study group they were in, and would not be put off by the taste of chlorine [2]. Blinding was largely successful during the triial, with most participants unable to accurately guess which intervention they had received. Nevertheless, nine communal water points in the intervention group were uninstalled, primarily due to individual complaints about the smell and taste of chlorinated water.

Importantly, the intervention had the largest health benefits among children in Dhaka, reducing diarrhoea by 34% compared to 7% in Tongi. The authors speculate that this variation in effect probably resulted from the poorer water quality in Dhaka at the start of the study (e.g, 87% of tap samples in Dhaka were contaminated with E Coli compared with 50% in Tongi) and because Dhaka receives water that spends much longer travelling through unpressurised pipes, enabling contamination and sewage to seep into the system.

Compared to the control group, caregivers in the treatment group were significantly less likely to report seeking treatment for gastrointestinal illness for their child (260 cases of treatment sought out of 3062 child observations [12.2%] vs 382/3142 [8.5%]); spent less on illness-related treatment; and reported lower consumption of antibiotics by their children (table 2). Respiratory illness and differences in child weight and growth were similar between the groups.

Despite these achievements, the study has some limitations, including that diarrhoea episodes were based on caregiver-reported data, which might not accurately represent children's illness; and that participants may have drunk water from other sources, although less than 4% of respondents reported doing so.

Discussing the implications of the findings in a linked Comment, Dr Jean Humphrey from John Hopkins Bloomberg School of Public Health, USA, writes that the intervention will not work in all situations: "The device is compatible with only a specific type of water system--in the study area this was one third of the water taps...[and] although 1.3 billion people have gained access to piped water since 2000, 2.9 billion (38%) of the global population still do not have any kind of access to piped water...There is certainly no one-size-fits-all strategy for providing access to clean water throughout the world. However, the intervention reported in this paper is both specifically and conceptually an important step forward: this study shows that by removing the requirement of user behaviour change and slightly compromising effectiveness to achieve high uptake, a simple technology can have substantial public health benefit."]