Lactose tolerance spread throughout Europe in only a few thousand years 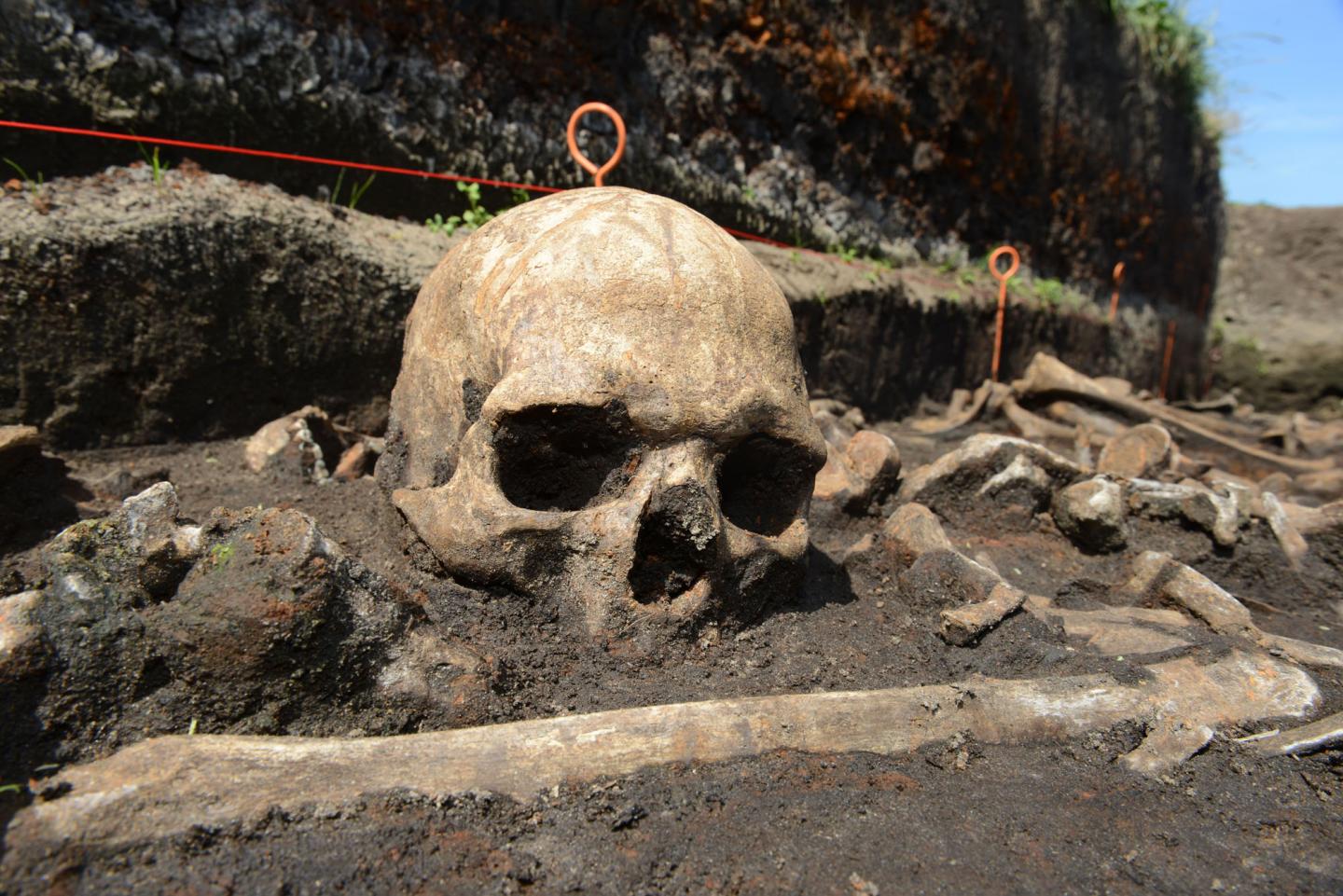 image: Bronze Age skull in situ in the Tollense valley.

The human ability to digest the milk sugar lactose after infancy spread throughout Central Europe in only a few thousand years. This is the conclusion reached by an international research team led by Johannes Gutenberg University Mainz (JGU). The researchers analyzed genetic material from the bones of individuals who had fallen in a conflict around 1200 B.C. on the banks of the Tollense, a river in the present-day German state of Mecklenburg-Western Pomerania, and report their findings in Current Biology this week. The researchers found that only around one in eight of the assumed warriors had a gene variant that enabled them to break down the lactose in milk. "Of the present-day population living in this same area, around 90 percent have this lactase persistence," explained population geneticist Professor Joachim Burger of JGU, the lead author of the study. "This is a huge difference when you consider that there cannot be many more than 120 human generations between then and today." Aside from lactase persistence and a few other genetic variants, the genomes of the Tollense people are similar to that of today's inhabitants of northern Germany and the Baltic Sea region.

Back in 2007, Burger and his team established that almost none of the first sedentary farmers in Europe were lactase-persistent. "It is astonishing that at the time of the battle at the Tollense, more than 4,000 years after the introduction of agriculture in Europe, lactase persistence in adults was still so rare," said Burger. However, there is as yet no definitive answer to the question: Why did being able to digest the sugar in milk after infancy provide such a big evolutionary advantage? "With milk being a high-energy, relatively uncontamined drink, its ingestion may have provided greater chances of survival during food shortages or when supplies of drinking water were contaminated. Particularly during early childhood, in the years shortly after weaning, this factor often may have been decisive amongst prehistoric populations," Burger concluded.

The study, which was funded by the German Federal Ministry of Education and Research (BMBF) and the German Research Foundation (DFG), also involved analyzing the genetic material in Bronze Age bones found in Eastern and South-Eastern Europe for comparison. The scientists found that these also showed low frequencies of lactase persistence. Even in bones from individuals from the Eastern European steppes, where previous studies had suspected adult lactase persistence may have originated, the trait was completely absent.

The conflict in the Tollense valley is considered the oldest known battle in Europe. Remains were first discovered there in the 1990s. For over ten years now, archaeologists have been systematically searching a kilometer-long section along the river. So far, the bones of more than 100 individuals have been discovered, many of them exhibiting signs of violent combat. Many still contain arrowheads, while some skulls look to have been crushed by blunt objects. Several thousand men are estimated to have been involved in the conflict, some of whom may have been on horseback.