Journey to the center of the earth

A UC Santa Barbara geochemist studying Samoan volcanoes has found evidence of the planet's early formation still trapped inside the Earth. Known as hotspots, volcanic island chains such as Samoa can ancient primordial signatures from the early solar system that have somehow survived billions of years.

Matthew Jackson, an associate professor in UCSB's Department of Earth Science, and colleagues utilized high-precision lead and helium isotope measurements to unravel the chemical composition and geometry of the deep mantle plume feeding Samoa's volcanoes. Their findings appear today in the journal Nature.

In most cases, volcanoes are located at the point where two tectonic plates meet, and are created when those plates collide or diverge. Hotspot volcanoes, however, are not located at plate boundaries but rather represent the anomalous melting in the interior of the plates.

Such intraplate volcanoes form above a plume-fed hotspot where the Earth's mantle is melting. The plate moves over time — at approximately the rate human fingernails grow (3 inches a year) — and eventually the volcano moves off the hotspot and becomes extinct. Another volcano forms in its place over the hotspot and the process repeats itself until a string of volcanoes evolves.

"So you end up with this linear trend of age-progressive volcanoes," Jackson said. "On the Pacific plate, the youngest is in the east and as you go to the west, the volcanoes are older and more deeply eroded. Hawaii has two linear trends of volcanoes — most underwater — which are parallel to each other. There's a southern trend and a northern trend."

Because the volcanic composition of parallel Hawaiian trends is fundamentally different, Jackson and his team decided to look for evidence of this in other hotspots. In Samoa, they found three volcanic trends exhibiting three different chemical configurations as well as a fourth group of a late-stage eruption on top of the third trend of volcanoes. These different groups exhibit distinct compositions.

"Our goal was to figure out how we could use this distribution of volcano compositions at the surface to reverse-engineer how these components are distributed inside this upwelling mantle plume at depth," Jackson said.

Each of the four distinct geochemical compositions, or endmembers, that the scientists identified in Samoan lavas contained low Helium-3 (He-3) and Helium-4 (He-4) ratios. The surprising discovery was that they all exhibited evidence for mixing with a fifth, rare primordial component consisting of high levels of He-3 and He-4.

"We have really strong evidence that the bulk of the plume is made of the high Helium-3, -4 component," Jackson said. "That tells us that most of this plume is primordial material and there are other materials hosted inside of this plume with low Helium-3, -4, and these are likely crustal materials sent into the mantle at ancient subduction zones."

The unique isotopic topology revealed by the researchers' analysis showed that the four low-helium endmembers do not mix efficiently with one another. However, each of them mixes with the high He-3 and He-4 component.

This map of the Samoan hotspot shows its division into three parallel volcanic lineaments.

"This unique set of mixing relationships requires a specific geometry for the four geochemical flavors within the upwelling plume: They must be hosted within a matrix that is composed of the rare fifth component with high He-3," Jackson explained. "This new constraint on plume structure has important implications for how deep mantle material is entrained in plumes, and it gives us the clearest picture yet for the chemical structure of an upwelling mantle plume." 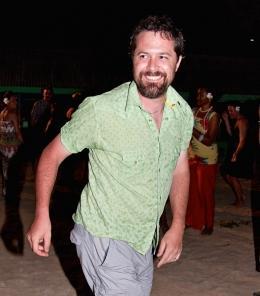 This is UCSB's Matthew Jackson on the beach in Samoa.