A research team led by Eri Hashino, Ph.D., Ruth C. Holton Professor of Otolaryngology at Indiana University School of Medicine, reported that by using a three-dimensional cell culture method, they were able to coax stem cells to develop into inner-ear sensory epithelia -- containing hair cells, supporting cells and neurons -- that detect sound, head movements and gravity. The research was reportedly online Wednesday in the journal Nature.

Previous attempts to "grow" inner-ear hair cells in standard cell culture systems have worked poorly in part because necessary cues to develop hair bundles -- a hallmark of sensory hair cells and a structure critically important for detecting auditory or vestibular signals -- are lacking in the flat cell-culture dish. But, Dr. Hashino said, the team determined that the cells needed to be suspended as aggregates in a specialized culture medium, which provided an environment more like that found in the body during early development.

The team mimicked the early development process with a precisely timed use of several small molecules that prompted the stem cells to differentiate, from one stage to the next, into precursors of the inner ear. But the three-dimensional suspension also provided important mechanical cues, such as the tension from the pull of cells on each other, said Karl R. Koehler, B.A., the paper's first author and a graduate student in the medical neuroscience graduate program at the IU School of Medicine. 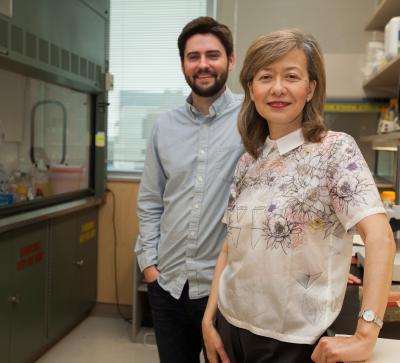 Karl Koehler (left) and Eri Hashino, researchers at Indiana University School of Medicine, reported research in which they transformed mouse embryonic stem cells into key structures of the inner ear.

"The three-dimensional culture allows the cells to self-organize into complex tissues using mechanical cues that are found during embryonic development," Koehler said.

"We were surprised to see that once stem cells are guided to become inner-ear precursors and placed in 3-D culture, these cells behave as if they knew not only how to become different cell types in the inner ear, but also how to self-organize into a pattern remarkably similar to the native inner ear," Dr. Hashino said. "Our initial goal was to make inner-ear precursors in culture, but when we did testing we found thousands of hair cells in a culture dish."

Electrophysiology testing further proved that those hair cells generated from stem cells were functional, and were the type that sense gravity and motion. Moreover, neurons like those that normally link the inner-ear cells to the brain had also developed in the cell culture and were connected to the hair cells.

Additional research is needed to determine how inner-ear cells involved in auditory sensing might be developed, as well as how these processes can be applied to develop human inner-ear cells, the researchers said.

However, the work opens a door to better understanding of the inner-ear development process as well as creation of models for new drug development or cellular therapy to treat inner-ear disorders, they said. 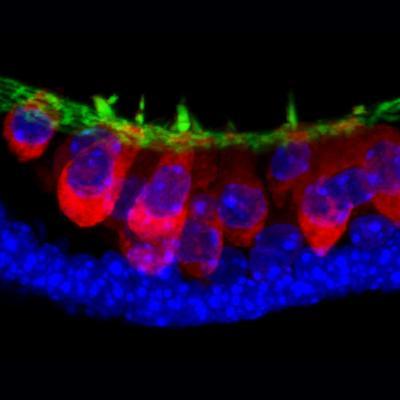 These are stem-cell-derived sensory hair cells (in red) with hair bundles (green) from research by Eri Hashino and Karl Koehler at Indiana University School of Medicine. Cellular nuclei are shown in blue.