AMES, Iowa - Social justice educational initiatives often focus on giving a voice to students of color and low-income students, but Katy Swalwell, an assistant professor of education at Iowa State University, says such efforts alone may not be enough to bring about real change.

Swalwell is not dismissing the need to empower students from oppressed and marginalized communities. However, she points to the continued lack of political power for certain socioeconomic groups, despite an increase in youth engagement.

"Regardless of their engagement, poor people have virtually no political power. The very wealthy are the ones with more political power and this gap is increasing," Swalwell said. "Research shows that the poor and middle class often only get what they want when their ideas align with very wealthy people." 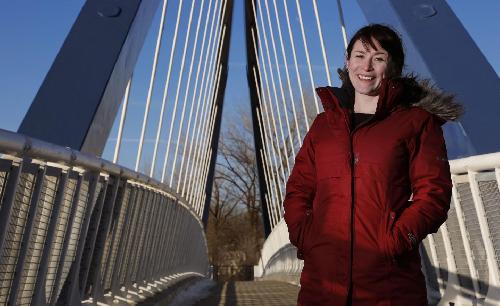 To reduce that gap, Swalwell says it's necessary to look at whether the education system is part of the problem and unintentionally reproduces inequalities. She spent a semester observing social studies classes at an affluent, private school to examine how privileged students learn about and respond to social justice problems. The majority of students at the school - 86 percent - are white, and tuition is more than $30,000 a year. The results of her case study, published in the journal Curriculum Inquiry, emphasize the disconnect that exists between student perception and reality.

"We do need to focus on low-income students, but if educators don't also look at what's happening in these affluent schools, they become the golden standard and we ignore a huge piece of what's perpetuating the problem," Swalwell said. "Instead of solving the problem, we're putting a Band-Aid on the wound."

Disrupt rather than reproduce

The goal of many social justice educators is to disrupt the status quo and challenge students' perceptions of why inequalities exist, Swalwell said. Many of the students she observed, however, were "fundamentally undisturbed" by what they were learning, despite the teacher's intentions. Swalwell included excerpts from student interviews in her paper that capture the general response.

One student told Swalwell: "I think [learning about injustice] can only help because we can reference it and sound really cool for saying it if people recognize it. Otherwise, we can help educate people on the things we learned about that maybe they didn't have the opportunity to learn about. Or, we just know it and that's great for us. Either way there's no downside to knowledge."

Throughout the semester, the teacher introduced students to various perspectives - both liberal and conservative - on civic engagement and social justice reform. The school also offered a social activism program, which required students to get involved in causes such as LGBTQ rights, issues facing incarcerated women, religious tolerance and reforming drug policies. Swalwell documented class lectures, discussions and field trips, analyzed course material and assignments, and conducted interviews with the students and teacher.

Most students expressed genuine concern about inequalities, but connected the problems to individual shortcomings rather than systematic disadvantages. Instead of seeing their privilege as part of the problem, several students saw their wealth and status as a solution; a way to make a difference, Swalwell said.

"The majority of students saw their role as that of a 'benevolent benefactor' who simply needed to be generous and to do good deeds," Swalwell wrote in the paper. "These kinds of responses maintain or even threaten to widen the civic empowerment gap by endorsing personally responsible or participatory models of citizenship."

Other students were so overwhelmed by the problems, they felt they should use their wealth to "unplug" and limit their impact on society, Swalwell said. Only a small group of students understood how class structure contributed to the problem, and that it would likely take many years of collective efforts to bring about real change because the issues are so complex.

Teaching a social justice curriculum at a private school comes with its own unique challenges. Swalwell says the teacher expressed concern about alienating students for critiquing their status and privilege. She also feared parents or students might accuse her of indoctrination or pushing a social agenda in class. While there were no reports or complaints, Swalwell says it's important for teachers to recognize the tension that exists.

Swalwell's case study is intended to provide support and research-based methods for teachers and schools grappling with these issues. Her research shows the most effective class activities and lessons emphasized personal connections to injustice and building relationships with marginalized groups. Lessons that had no emotional connection or focused on abstract knowledge did not produce the desired outcomes for social-justice education.

"The goal isn't to get all kids to think the same way or to have the same political beliefs, but to get them grappling with the same questions and make sense of the same data related to inequalities," Swalwell said. She stresses that "a strong democracy depends on all of its members being willing and able to do this, a message that is especially relevant during a presidential election cycle."