'Ironing' out the differences: Understanding superconductivity in ultrathin FeSe 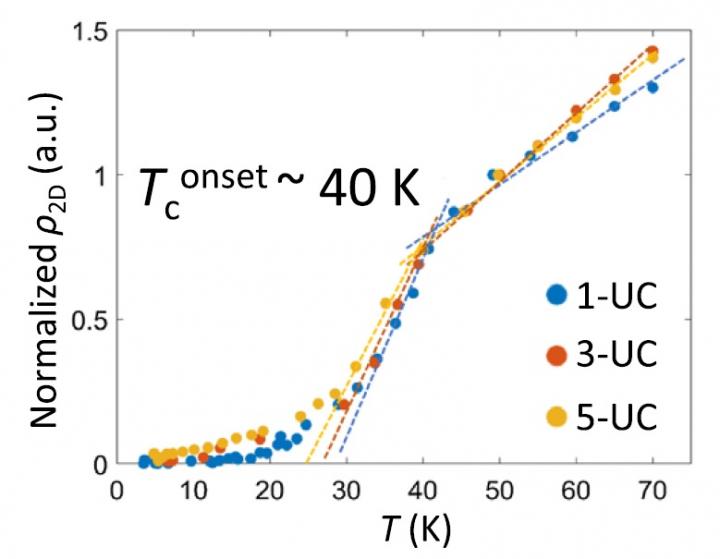 Scientists at Tokyo Institute of Technology (Tokyo Tech) elucidate the underlying cause behind the different critical transition temperatures reported for ultrathin iron selenide (FeSe) superconductors. Their results clarify why the interface between the first FeSe layer and its substrate play an essential role in superconductivity, giving new insights into a long-standing puzzle in this field.

Superconductors are materials that, below a certain temperature, have fascinating electromagnetic properties. They exhibit zero resistance, which means that they conduct electricity without losing energy in the form of heat, and can also completely repel external magnetic fields. Because of such feats, superconductors are very attractive for fundamental physics studies and electronics applications.

Although it's been fourteen years since iron-based superconductors were discovered, scientists are still at a loss regarding the underlying mechanisms of superconductivity in ultrathin layers of iron selenide (FeSe). While the critical transition temperature (Tc) below which bulk FeSe behaves as a superconductor is 8 K, significantly different values have been reported for monolayers of FeSe crystals grown uniformly on a strontium titanate (STO) substrate; these values range from 40 K to as high as 109 K.

In a recent study published in Physical Review Letters, Prof. Satoru Ichinokura and colleagues from Tokyo Tech shed some light on this problem. Ichinokura describes the problem at hand: "Even though several studies indicate that the interface between FeSe and STO, or the area where FeSe and STO come in contact, plays an essential role in the enhancement of Tc, there is room for further work to accurately explain the microscopic origin of this behavior." Moreover, there is also an ongoing debate concerning the depth at which superconductivity occurs with respect to the thickness of the FeSe film.

To tackle these questions, the researchers prepared samples by stacking FeSe at thicknesses ranging from one to five unit-cell layers onto an insulating STO substrate. Through four-point probe measurements in vacuum, they deduced the resistivity (the inverse of conductivity) of the samples at various temperatures and different depths. First, they found definite evidence that their electrical measurements correspond to conduction along the FeSe films, without influence from the underlying STO substrate. More importantly, they consistently observed a marked resistivity drop at 40 K (indicating the onset of superconductivity; see Figure ) regardless of the thickness of the FeSe layer. Ichinokura remarks: "These results unambiguously suggest that high-temperature superconductivity is essentially located at the interface between FeSe and STO or at the bottommost FeSe monolayer without spreading to the upper ones."

Now, why did other studies report different Tc values? After carefully reviewing previous works, Ichinokura and his colleagues conclude that differences in the number of dopants in the STO substrate or oxygen vacancies in the STO subsurface layers are responsible for the variability in Tc values. In some previous studies, the fabrication procedure employed is likely to have induced oxygen vacancies at the surface of the otherwise uniform STO layer. In others, STO doped with niobium impurities was used. These differences in the substrate allow more charge carriers (electrons) to reach the STO/FeSe interface, which results in sustained superconductivity even at higher temperatures (in other words, increased Tc).

Excited by these results, Ichinokura concludes: "Our results strongly indicate the interfacial nature of the two-dimensional superconductivity observed in FeSe/STO and reconfirm the importance of charge accumulation from the substrate into the interface. We have been able to obtain new insights into the long-standing puzzle of finding low Tc of about 40 K when using insulating STO substrates instead of conductive ones." This study puts us one step closer to elucidating the mysteries concerning the enhanced superconductivity.