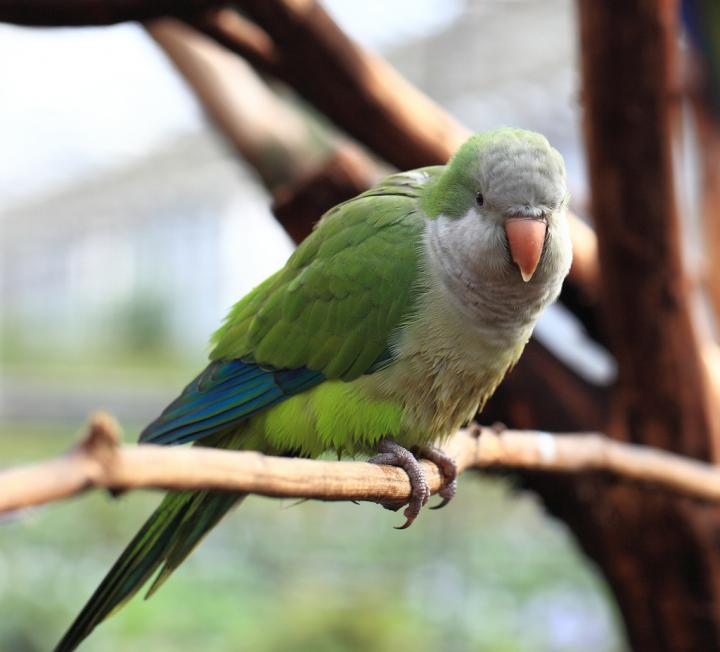 IMAGE: The monk parakeet (Myiopsitta monachus), also known as the Quaker parrot, is another South American species, known from the temperate to subtropical regions of Argentina and neighboring countries.

Non-native parrots can cause substantial agricultural damage and threaten native biodiversity, although impacts vary strongly depending on where these parrots have been introduced. Brought to Europe as pets, escaped or released parrots have established numerous wild populations across Europe. Tens of thousands of ring-necked and monk parakeets make up the bulk of Europe's parrots, but several more species are gaining a foothold too.

A pan-European team of researchers, conservationists, wildlife managers and policy-makers worked together under the umbrella of ParrotNet, an EU COST Action, and have reviewed the available evidence on parrot damage, concluding that measures to prevent parrots from invading new areas are paramount for limiting future harm. Their findings are published in the open-access journal NeoBiota.

Introduced parrots can damage the environment, but severe impacts remain rare and localised. So far, most reports of damage are linked to the widespread and locally abundant ring-necked and monk parakeets. Studies show that in their native ranges, both species can and regularly do inflict large crop losses, but in Europe, expectations of comparable widespread and severe damage to agriculture have so far failed to materialise.

In Europe, competition with native species presents a more serious problem, especially for ring-necked parakeets as they can compete with native species for food and breeding sites. Meanwhile, in the Americas, monk parakeets are notorious for the damage their stick nests cause to power infrastructures by catching fire, yet very little evidence for such problems exist in Europe.

Reported impacts for other parakeet species in Europe are virtually nonexistent, probably because these species have been introduced more recently and currently exist as relatively small and localised populations.

"It was already well known that introduced parakeets can cause damage. There is the oft-cited example of a vineyard in Surrey (UK) where ring-necked parakeets caused a loss of thousands of bottles of wine. In Seville (Spain), the same parakeet species is threatening an endangered native bat population by evicting them from their roosting tree cavities. Our review of all reported impacts however shows that such severe damage is not the norm. In most cases, parakeets introduced to Europe only do limited damage and, for example, about half of the studies focusing on competition between introduced parakeets and native species explicitly report no evidence of impact."

The study also highlights that differences in the type of damage, and the way they are reported and summarised influences the outcomes of invasive species impact assessments.

The generalised threat level that invasive species pose is often based on their worst known impacts, whilst the capabilities of a species to do damage often requires specific circumstances. While this is relevant information for identifying those invaders that can potentially have major impacts, it is not necessarily representative of the impacts the species is likely to have when introduced to a new area. Similarly, including damage reports from the native range or from other invaded ranges typically results in higher threat level estimates compared to what actually has been observed in Europe.

What can be done to mitigate parakeet impacts?

Based on the results of the study, the ParrotNet members also published a 'policy brief', summarising and discussing the implications of their findings for policy makers and wildlife managers. Their recommendations include stricter regulation aimed at preventing parakeet introductions, rapid response when emerging populations are detected and better dissemination of information to the public about the impact parakeets can have. For example, using bird feeders that parakeets cannot access may help reduce the abundance of these birds in cities.

Prof. Jim Groombridge of the Durrell Institute of Conservation and Ecology (DICE), School of Anthropology and Conservation, University of Kent (UK) comments:

"What should be done to minimise damage by invasive parakeets is ultimately up to policy-makers. But as scientists, we stress that our work again highlights that the best way to combat invasive species is to prevent their introduction and spread. Parakeet populations have already been successfully removed, for example, from islands such as the Seychelles, demonstrating that it is possible to stop them when prompt and decisive action is taken by governments. For the already established and large parakeet populations that can be found across parts of Europe, there is no 'silver bullet' solution to the problems they may locally pose. More applied research is needed to find cost-effective and acceptable methods to reduce parakeet impacts in those areas where they do cause damage".