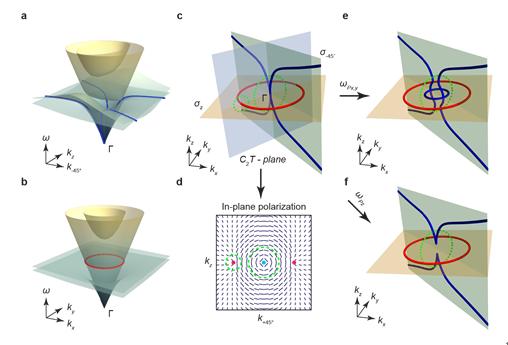 IMAGE: a. Band structure of the bi-anisotropic effective medium model in the space of [k-45°, kz, ω]. The blue lines are band degeneracies. b. Band structure with kz = 0, nodal...

Topological photonics has attracted a lot of attention recently. The application of topological band theory to photonics not only opens the door to novel devices, but also stimulates the exploration of new topological phases. In the photonic regime, symmetries that are unique to electromagnetic (EM) waves can intrinsically protect the band degeneracies in the momentum space. Topological systems realized using such symmetries are uniquely "photonic", having no counterparts in electronic or phononic systems.

Among various topological features in momentum space, nodal chain is a special configuration of nodal line where two nodal curves touch at isolated points. It is generally perceived that the two nodal lines should reside on two separate mirror planes, each protected by their corresponding mirror symmetries. The chain points are then found to be stabilized on their intersection lines as shown in Fig. 1. However, the in-plane type of nodal chain embedded in mere one mirror symmetry is generally unstable.

In a new paper published in Light Science & Application, a team of scientists, led by Professor C. T. Chan from Department of Physics, Hong Kong University of Science and Technology, Hong Kong, China, and co-workers have proposed a photonic in-plane nodal chain which is stabilized by the intrinsic symmetry of EM waves. The in-plane nodal chain is uniquely stable in photonics due to the internal symmetries of the Maxwell equations and has no counterparts in other systems. They further developed non-Abelian nodal link in the absence of Parity-Time (PT) symmetry and protected by generalized quaternion charges.

In Fig. 2, the authors present the stable in-plane nodal chain in a photonic bianisotropic metamaterials. The chain point is located at the Γ point of zero frequency and is thus stable against perturbation due to the internal symmetry of EM waves. By introduced Lorentz resonance, a dispersionless longitudinal mode appears and intersects the propagating transverse mode as nodal ring. The in-plane nodal chain(blue) thread through the nodal ring(red) and from into nodal link. The nodal link is constructed by three adjacent bands which give enough freedom to define non-Abelian charges. The non-Abelian charges represent the frame rotations of a set of real eigenfunctions, which form the elements of non-Abelian (generalized) quaternion groups.

The generalized quaternion charges can elegantly explain or predict admissible transitions of the nodal link. In order to demonstrate the transition rule of the nodal link, artificial plasmon resonances are considered to introduce cut-off frequencies and force the chain point to break. In Fig. 2c-f, the green loop (larger one) possesses nontrivial generalized quaternion charge of -1, which governs that the encircled nodal line pairs cannot disappear. When the nodal chain break along horizontal direction, a new nodal ring (blue) has to emerge so as to conserve the charge of -1. In a different configuration, the nodal chain is allowed to break along vertical direction, since the green circle is still encircling a pair of nodal lines, and the -1 non-Abelian charge remains conserved.