The study of 876 late-stage SCLC patients, published today in the peer-reviewed scientific journal PLOS ONE, showed that statins, a class of drugs primarily used to lower cholesterol in patients at risk for heart disease, appeared to provide an increase in overall survival for those cancer patients who received them.

"Small cell lung cancer is one of the most aggressive types of cancer, and yet in nearly three decades, no new classes of treatments have been adopted as new benchmarks for standard therapy," said Dr. Glen Weiss, M.D., M.B.A., Director of Clinical Research and Medical Oncologist at CTCA® at Western in Goodyear, Ariz., and the study's senior author. "Our study showed that statins appear to provide a statistically significant survival benefit among patients with metastatic SCLC." 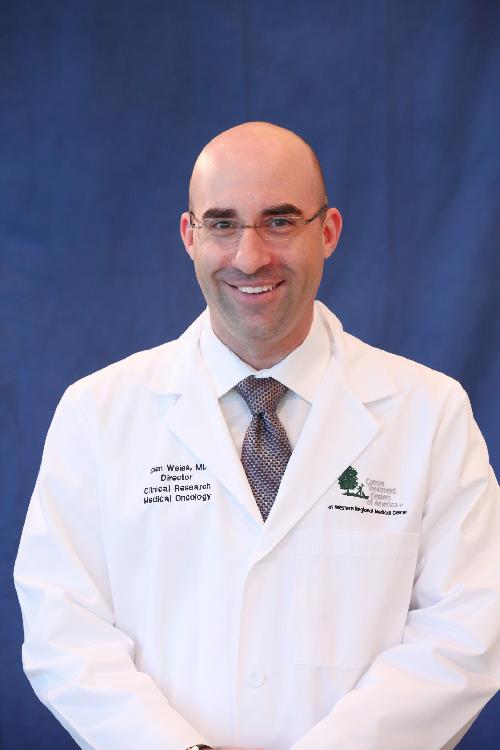 Dr. Glen Weiss is Director of Clinical Research and Medical Oncologist at CTCA® at Western in Goodyear, Ariz., and the study's senior author. Credit: Photo courtesy of Cancer Treatment Centers of America

In collaboration with Dr. Weiss, Dr. Zoltan Lohinai, M.D., the study's first author performed his analyses while based at CTCA under a grant from the Lung Cancer Research Scholarship of the Hungarian Society of Pulmonology 2015. Dr. Lohinai is a thoracic oncology fellow at the National Koranyi Institute of Pulmonology and a Ph.D. student at the Medical University of Budapest, Hungary. This international partnership expanded the data pool of patient information. With 51.6 cases per 100,000 people, Hungary has the world's highest rate of lung cancer. That compares to 38.4 per 100,000 in the U.S., the world's eighth highest rate of lung cancer.

Past drug-repositioning reviews, involving pre-clinical data and limited numbers of patients, appeared to have demonstrated anti-SCLC activity among some FDA-approved medications for treatment of non-malignant disorders.

"The aim of our study was to confirm whether the use of these non-cancer medications might be associated with a survival benefit for cancer patients," Dr. Lohinai said.

Significantly, their analyses appeared to show no statistical benefit for SCLC cancer patients taking any of those medications, except for statins.

"Our study evaluated the recent laboratory findings in a clinical setting. Among several studied drugs, statins were the only medications that appeared to increase the survival in patients suffering from this aggressive tumor," Dr. Lohinai said. "We concluded that drug repositioning studies using only preclinical data or small numbers of patients should be treated with caution."

Another finding of this study was that radiotherapy appeared to be an independent predictor of survival.

"Our data demonstrated that radiotherapy appears to be an independent survival predictor in stage 4 SCLC, thereby confirming the results of other prospective and retrospective studies," said Dr. Weiss, who leads the clinical research program at Western.

This study -- From Bench to Bedside: Attempt to Validate Repositioning of Drugs in the Treatment of Metastatic Small Cell Lung Cancer (SCLC) -- was funded by a grant from Lung Cancer Research Scholarship of the Hungarian Society of Pulmonology 2015.