Insurance protection could hurt farmers in the long term

Insurance can help farmers to survive dry periods but it can also result in the long term in overgrazing and therefore threaten their existence if insurance companies pay out in periods of moderate drought and farmers change their management strategies as a result, according to the world's first study on the ecological effects of rain-index insurance. As the international community decided at the UN Climate Change Conference in Cancun to set up a fund with which industrial nations intend to support developing countries with 100 billion dollars per year from 2020 for climate adaptation, rain-index insurance might experience a boom in the next few years. Politicians should therefore be particularly cautious if they support such insurance with subsidies for example. Negative effects on the ecosystem can only be prevented if ecology and economics are taken into account, therefore securing the existence of farmers for the long term, according to the scientists in the journal Ecological Economics.

Rain-index insurance protects farmers against weather catastrophes. They do not have to provide specific proof of their losses as is otherwise the case, but the payout is linked to a predefined rain index. If less rain falls than the agreed threshold level, the farmers receive the contractually agreed compensation which should secure their survival. The insurance is therefore viewed by development aid organisations as a concept to prevent famines brought on by drought like the current famine in eastern Africa for example. According to the UN World Food Programme (WFP), in 2009 around a million people were insured in this way with a total of around one billion US dollars. Around one billion people worldwide, in particular in dry regions, are dependent on livestock farming; a lack of rainfall therefore threatens their existence. 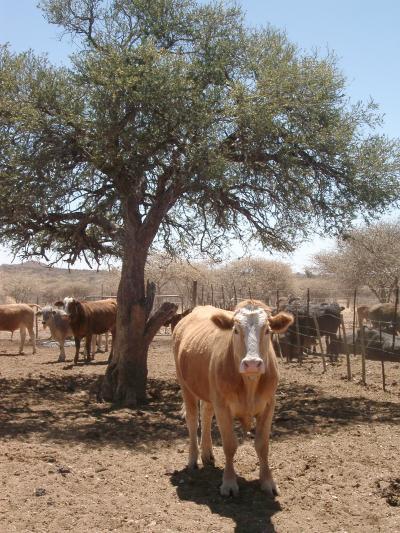 This is cattle on Nambian farmland.

In 2006 a French reinsurance company, with support from the United Nations, insured Ethiopian farmers for the first time on a large scale. Further projects are being supported in various countries by the World Bank. From November 2011 a Swiss reinsurance company intends to insure poor farmers in Ethiopia and three other countries against climate risks with up to 28 million US dollars. With over 2 million policies, India currently has the most rain-insurance policies.

The income of livestock farmers in semi-arid regions is mostly dependent on the annual rainfall; such insurance policies can therefore offer effective protection against such risks. The advantages of this kind of insurance policy are obvious, but they are not always easy to introduce: it is often difficult to convince farmers with no experience of insurance that they might benefit from it. The majority of potential customers are among the poorest of the poor who struggle every day for their survival. On top of this, rain-index insurance requires a comprehensive measuring network of weather stations, which in most cases does not exist in developing countries.

In addition to the social and technical hurdles, there are also ecological consequences, as scientists from the Helmholtz Centre for Environmental Research (UFZ), the Christian-Albrechts-Universität zu Kiel (Kiel University) and the Leuphana University of Lüneburg have now shown in a study. Using a simple grazing management model based on an analysis of commercial livestock farmers in southern Africa, they simulated how such insurance influences the working practice of farmers. The result was conclusive: the higher the rain-index threshold at which the insurance is paid out, the less incentive there is to choose a sustainable form of grazing. Traditionally these livestock farmers divide their pastures and rest part of the area in years of sufficient rainfall so that the grass there can regenerate better and be available later as a reserve for dry years. The scientists fear that they might not make this provision in future if insurance companies pay out too often for losses in income. 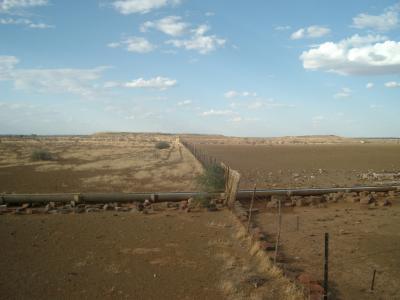 This photo shows overused versus rested pastures on livestock farms in Namibia.

The study also suggests how the insurance should be structured in order to prevent ecological damage. If payouts are only made in periods of extreme drought, the farmers will rely on using their natural risk management strategy in periods of moderate drought, which helps to maintain the quality of the pasture in the long term. "A natural risk management strategy has two effects: it is an investment in the future and at the same time helps to manage short-term risks. Insurance can only minimise the risk in the short term though and therefore does not have this long-term effect," explains Dr. Birgit Müller from the UFZ. If more livestock is now kept in the same area, the departure from a sustainable management strategy might trigger an avalanche: if the pressure on the pasture increases, the regeneration time and as a result productivity will fall, at the same time more soil will be eroded and more area will be turned into desert in these dry regions. This proves that rain-index insurance, just like other forms of insurance, motivates the farmers to take more risks; these may become noticeable in ecological consequences such as increased use of nitrogen and pesticides, a rise in water consumption, less biodiversity and more soil erosion. The erosion and desertification of fields and pastures in dry regions is already a major problem, which according to UN estimates results in an annual loss in income of around 42 billion US dollars. 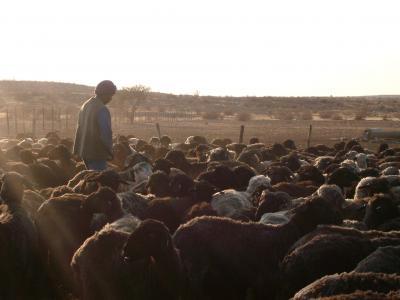 This is a herder of Karakul sheep in Namibia.