Despite their diversity, the structure of most tropical rainforests is highly predictable. Scientists have described the various sizes of the trees by a simple mathematical relationship called a power law.

In a new study using data from a rainforest in Panama, researchers determined that competition for sunlight is the underlying cause of this common structure, which is observed in rainforests around the globe despite differences in plant species and geography. The new finding can be used in climate simulations to predict how rainforests absorb excess carbon dioxide from the atmosphere.

The study, conducted by researchers at Princeton University, the National Institute for Mathematical and Biological Synthesis, the Smithsonian Tropical Research Institute and collaborating institutions, was published Jan. 8 in the journal Science. The investigation was supported in large part by the National Science Foundation. 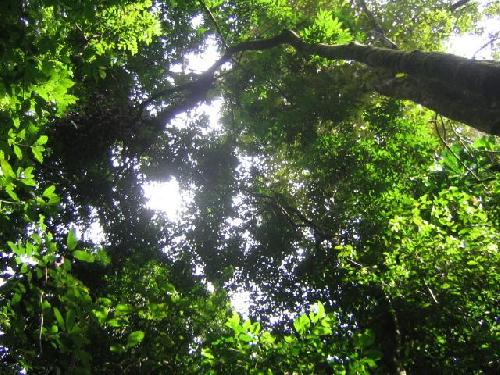 Rainforests around the globe have a remarkably consistent pattern of tree sizes. Now researchers have found that the reason for this structure has to do with the competition for sunlight after a large tree falls and leaves an opening in the canopy. The newly available sunlight enables the understory trees to grow quickly until a few outstrip the others and block the light from reaching their shorter counterparts. The process of moving from fast growth in the sun to slow growth in the shade sets up the characteristic size structure that is common across tropical rainforests, according to research conducted by Caroline Farrior while a postdoctoral research associate at the Princeton Environmental Institute working with Stephen Pacala, Princeton's Frederick D. Petrie Professor in Ecology and Evolutionary Biology. Credit: Caroline Farrior

The researchers found that the rainforest structure stems from what happens after a tall tree falls and creates a gap in the canopy. The gap enables sunlight to reach the forest floor and fuel the rapid growth of small trees. Over time, the trees' crowns grow to fill the gap until the point where not all of the trees can fit in the sunlit patch. Some will be left behind in the shade of their competitors.

"This process of moving from fast growth in the sun to slow growth in the shade sets up this characteristic size structure that is common across tropical rainforests, despite the differences in their environments," said Caroline Farrior, first author of the study and who is currently a postdoctoral fellow at the National Institute for Mathematical and Biological Synthesis and is soon to be an assistant professor of integrative biology at the University of Texas-Austin.

Farrior, who earned her Ph.D. in ecology and evolutionary biology from Princeton University in 2012, completed most of the work as a postdoctoral researcher in the Princeton Environmental Institute with co-author Stephen Pacala, Princeton's Frederick D. Petrie Professor in Ecology and Evolutionary Biology.

"Rainforests store about twice as much carbon as other forests," Pacala said. "About half of that is due to huge trees, but the other half is all that stuff in the middle. It is not possible to build an accurate climate model without getting that right."

To gain an understanding of how rainforests grow, Farrior and colleagues analyzed decades of tree census data from a 50-hectare plot on Barro Colorado Island in the Panama Canal. From these data, they identified the mechanism most important in driving the observed size structure in tropical rainforests.