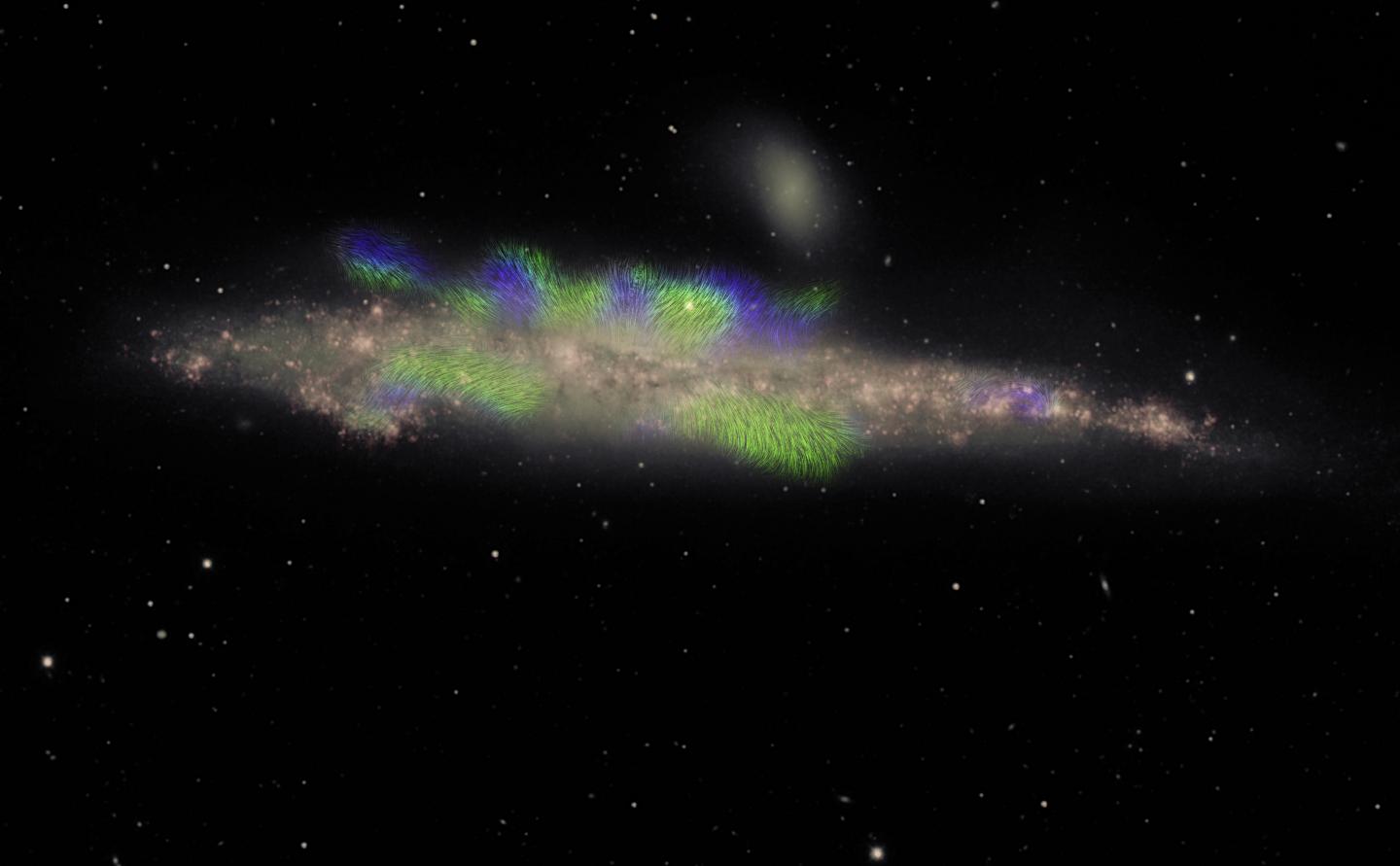 IMAGE: This combined radio/optical image of the "Whale Galaxy, " NGC 4631, reveals magnetic structures. The spiral galaxy is seen edge-on, with its disk of stars shown in pink. The filaments, shown...

Image:
Composite image by Jayanne English of the University of Manitoba, with NRAO VLA radio data from Silvia Carolina Mora-Partiarroyo and Marita Krause of the Max-Planck Institute for Radioastronomy. The...

This image of the "Whale Galaxy" (NGC 4631), made with the National Science Foundation's Karl G. Jansky Very Large Array (VLA), reveals hair-like filaments of the galaxy's magnetic field protruding above and below the galaxy's disk.

The spiral galaxy is seen edge-on, with its disk of stars shown in pink. The filaments, shown in green and blue, extend beyond the disk into the galaxy's extended halo. Green indicates filaments with their magnetic field pointing roughly toward us and blue with the field pointing away. This phenomenon, with the field alternating in direction, has never before been seen in the halo of a galaxy.

"This is the first time that we have clearly detected what astronomers call large-scale, coherent, magnetic fields far in the halo of a spiral galaxy, with the field lines aligned in the same direction over distances of a thousand light-years. We even see a regular pattern of this organized field changing direction," said Marita Krause, of the Max-Planck Institute for Radioastronomy in Bonn, Germany.

An international team of astronomers who are part of a project called the Continuum HAlos in Nearby Galaxies -- an EVLA Survey (CHANG-ES), led by Judith Irwin of Queen's University in Ontario, said the image indicates a large-scale, coherent magnetic field that is generated by dynamo action within the galaxy and spirals far outward in the form of giant magnetic ropes perpendicular to the disk.

"We are a little bit like the blind men and the elephant, since each time we look at the galaxy in a different way we reach a different conclusion about its nature! However, we seem to have one of those rare occasions where a classical theory, about magnetic generators called dynamos, predicted the observations of NGC 4631 quite well. Our dynamo model produces spiralling magnetic fields in the halo that are a continuation of the normal spiral arms in the galaxy's disc," said Richard Henriksen, of Queen's University.

The scientists are continuing their work to further refine their understanding of the galaxy's full magnetic structure.

The image was made by combining data from multiple observations with the VLA's giant dish antennas arranged in different configurations to show both large structures and finer details within the galaxy. The naturally-emitted radio waves from the galaxy were analyzed to reveal the magnetic fields, including their directions.

The scientists said the techniques used to determine the direction of the magnetic field lines, illustrated by this image, now can be used on this and other galaxies to answer important questions about whether coherent magnetic fields are common in galactic halos and what their shapes are.

Building such a picture, they said, can answer important questions such as how galaxies acquire magnetic fields, and whether all such fields are produced by a dynamo effect. Can these galaxy halo fields illuminate the mysterious origin of the even larger intergalactic magnetic fields that have been observed?

NGC 4631, 25 million light-years from Earth in the constellation Canes Venatici, is about 80,000 light-years across, slightly smaller than our own Milky Way. It was discovered by the famous British astronomer Sir William Herschel in 1787. This image also shows a companion, NGC 4627, a small elliptical galaxy, just above NGC 4631.