Alkaloids constitute a very large group of natural nitrogen-containing compounds with diverse effects on the human organism. A large variety of plant-produced alkaloids have strong pharmacological effects, and are used as toxins, stimulants, pharmaceuticals or recreational drugs, including caffeine, nicotine, morphine, quinine, strychnine, atropine and cocaine. Atropine, used to dilate the pupils of the eye, and the addictive drug cocaine are both tropane alkaloids which possess two distinctive, inter-connecting five- and seven-membered rings.

Plants commonly produce tropane and other alkaloids for protection against herbivores and other enemies. Species in seven plant families are known to produce tropane alkaloids, including the Brassicaceae (mustard family), Solanaceae (nightshade or potato family) and Erythroxylaceae (coca family). These families are not closely related to each other. For example, it is assumed that the last common ancestor of the Erythroxylaceae and the Solanaceae lived about 120 million years ago. But how similar are the tropane alkaloid biosynthetic pathways in these families? Was there a single original tropane alkaloid pathway which was lost in most other plant families during the course of evolution? Or, did tropane alkaloid biosynthesis arise independently on several different occasions?

John D'Auria, project leader in the Department of Biochemistry at the Max Planck Institute for Chemical Ecology, has been studying the coca plant, from which the drug cocaine is derived. Native tribes in South America have been cultivating coca and chewing its leaves for at least 8000 years for their stimulant and hunger-suppressing properties. 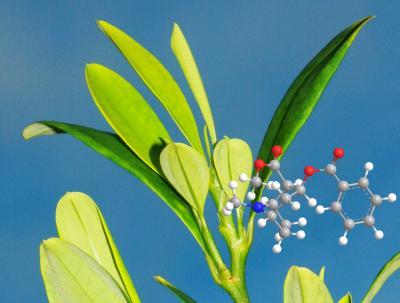 Although the formation of cocaine has not been investigated in the last 40 years, the biosynthesis of the related tropane alkaloid, atropine, from belladonna (Solanaceae) is well-established. In the penultimate step, a ketone function is reduced to an alcohol residue. This key reaction is catalyzed by an enzyme of the short-chain dehydrogenase/reductase (SDR) protein family in belladonna. Among this group of enzymes are also many alcohol-degrading dehydrogenases in animals.

To find the corresponding enzyme in cocaine biosynthesis, Jan Jirschitzka, a PhD student in the group, searched the genome of the coca plant to look for SDR-like proteins. However, all the SDR genes that he cloned and expressed did not show any activity for the key reaction in cocaine formation. So he used a more classical approach − identifying the cocaine-synthesizing enzyme activity in extracts from coca leaves, purifying the responsible protein, isolating the polypeptide, and − after partial sequencing − cloning the corresponding gene.

"We obtained two very interesting results," says Jonathan Gershenzon, director at the institute. "The enzyme reaction analogous to that in atropine synthesis − the conversion of the keto group into an alcohol residue − is catalyzed by a completely different enzyme in coca plants as compared to that in the Solanaceae, namely by an aldo-keto reductase (AKR)." The enzyme was named methylecgonone reductase (MecgoR). AKR enzymes are known in plants and also mammals, amphibians, yeast, protozoa, and bacteria. They are involved in the formation of steroid hormones, for example. The second result is that the MecgoR gene, as well as the protein, is highly active in the very young leaves of coca plants, but not in the roots. Atropine, on the other hand, is synthesized exclusively in the roots of belladonna, from where it is transported into the green organs of the plant. Based on these results, the Max Planck researchers conclude that the tropane alkaloid pathways in coca and belladonna evolved completely independently. 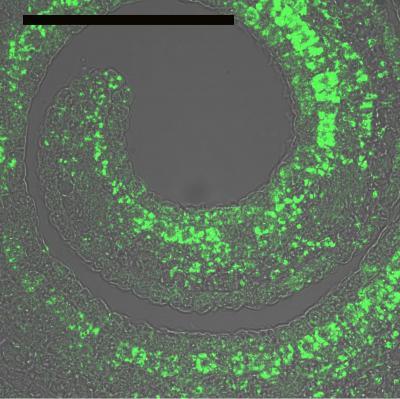 This image shows immunolabeling (green areas) of MecgoR, the enzyme catalyzing the penultimate step of cocaine biosynthesis. The picture shows the strong accumulation of the enzyme in a cross section of a very young E. coca leaf, which is still curled around the growing stem tip. Bar: 0,1 mm.

Elucidation of the MecgoR-catalyzed step in cocaine biosynthesis represents a major success, but the researchers are now continuing to investigate other important steps in the cocaine pathway. Also of interest is to learn how cocaine is stored in leaf tissue in such high amounts. This alkaloid can account for up to 10% of the dry weight of the immature coca leaf, a phenomenal amount for the accumulation of any one particular alkaloid. [JWK/AO] 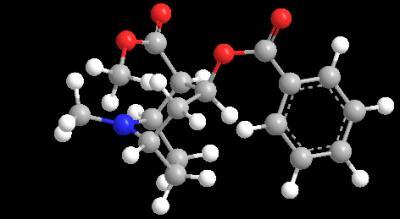