High diversity of flying reptiles in England 110 million years ago

Brazilian paleontologists Taissa Rodrigues, of the Federal University of Espirito Santo, and Alexander W. A. Kellner, of the National Museum of the Federal University of Rio de Janeiro, have just presented the most extensive review yet available of toothed pterosaurs from the Cretaceous of England. The study features detailed taxonomic information, diagnoses and photographs of 30 species and was published in the open access journal ZooKeys.

Pterosaurs from the Cretaceous of England were first described by British naturalists Richard Owen and Harry Seeley in the 19th century, when little was known about the diversity of the group, resulting in the description of dozens of species, all based on very fragmentary remains, represented mostly by the tips of the snouts of these animals. However, more recent findings of pterosaur fossils have challenged views on their diversity. 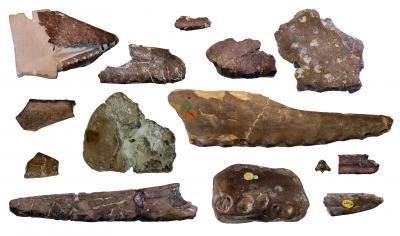 The holotypes of the species recognized as valid by the researchers, put to the same scale, illustrate how diverse this pterosaur fauna was.

Results show that these pterosaurs had a remarkable diversity in their appearances. Some species had head crests of different sizes and shapes, while others had none. Most had large teeth at the tip of their snouts and were fish eaters, but others had smaller teeth, suggesting different feeding preferences. The paleontologists were able to identify fourteen different species, belonging to at least five different genera, showing a greater diversity than previously thought.

Most of these fossils were found in a deposit known as the Cambridge Greensand, located in the eastern part of the country. This unit, one of the most important for the study of flying reptiles, records a past marine environment where the bones that were already fossilized and buried, were eroded, exposed to weathering, and then buried again. Cycles of erosion and burial must have taken place during several years. Due to this peculiarity, the pterosaur assemblage from this deposit probably presents temporal mixing of faunas, thus explaining the high diversity found.

Another find was that these English flying reptiles turned out to be closely related to species unearthed in northeastern Brazil and eastern China. According to Dr. Rodrigues, 'This is very interesting, especially because the continents had already drifted apart. If these animals were migratory, we would expect to find the same species in all these deposits.' Instead, the scientists have discovered that England, Brazil and China all had their own species and genera.

Analysis of fossils from other continents showed that this group of pterosaurs was already widespread in the whole planet 110 million years ago, and must have been important faunistic elements at this time of the Cretaceous period, being early bird competitors, before they went extinct a few million years later. 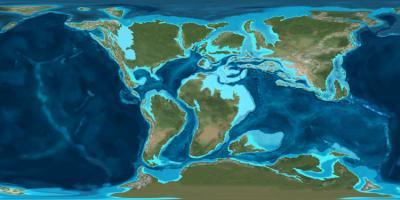 This map shows how the continents were positioned during the middle Cretaceous.