Now a research team at the National Institute of Standards and Technology (NIST) in Boulder, Colo., may help bring graphene's promise closer to reality. While searching for an ideal growth platform for the material, investigators developed a promising new recipe for a graphene substrate: a thin film of copper with massive crystalline grains. The team's findings appear in the journal AIP Advances, which is produced by AIP Publishing.

The key advance is the grain size of the copper substrate. The large grains are several centimeters in size – lunkers by microelectronics standards – but their relative bulk enables them to survive the high temperatures needed for graphene growth, explained NIST researcher Mark Keller. 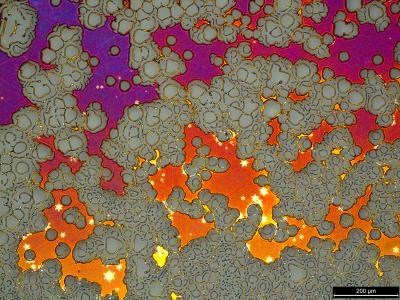 This is an optical microscope image of a copper film mostly destroyed during graphene growth. What was a continuous copper film has decomposed into grey areas of bare sapphire, rings and irregular patches of copper that appear in a rainbow of colors due to oxidation, and small star-shaped islands of graphene, which appear bright because the graphene protects the copper from oxidation.

The inability of most copper films to survive this stage of graphene growth "has been one problem preventing wafer-scale production of graphene devices," Keller said.

Thin films are an essential component of many electronic, optical, and medical technologies, but the grains in these films are typically smaller than one micrometer. To fabricate the new copper surface, whose grains are about 10,000 times larger, the researchers came up with a two-step process.

First, they deposited copper onto a sapphire wafer held slightly above room temperature. Second, they added the transformative step of annealing, or heat-treating, the film at a much higher temperature, near the melting point of copper. To demonstrate the viability of their giant-grained film, the researchers successfully grew graphene grains 0.2 millimeters in diameter on the new copper surface.