In Missouri forests, dense thickets of invasive honeysuckle decrease the light available to other plants, hog the attention of pollinators and offer nutrient-stingy berries to migrating birds. They also release toxins that decrease the germination of nearby native plants. Why, then, do studies of invasive species come to different conclusions about their effects and lead some organizations to suggest we accept their presence?

Most studies of the effects of invasive plants are done at a single scale, report the scientists in this week's issue of the journal Science. Some studies scrutinize biodiversity in meter-square quadrats, while others scan biodiversity in entire islands or regions.

Meanwhile, invasives decrease biodiversity at small--but not at large--scales, the researchers discovered, leading them to conclude that how invasive species research is conducted can produce conflicting results.

"Perhaps not surprisingly, the big picture perspective is fundamentally different than the small-scale perspective," says Doug Levey, program director in the National Science Foundation's (NSF) Division of Environmental Biology, which funded the research. 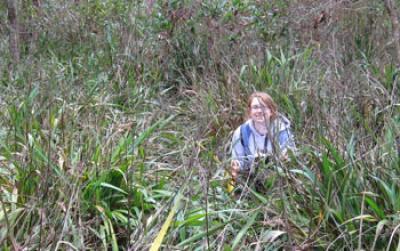 This is Kristin Powell amid the invasive plant cerulean flax lily in central Florida.

The biologists had long suspected that studies of invasive species came to different conclusions because of scale dependence.

To test this notion, they analyzed 57 previous studies and confirmed a pattern: Invasive plants cause a large loss in species richness at small scales, but this effect diminishes at larger scales. To test for scale dependence in the field, they chose three study sites in different ecosystems across the United States, each straddling an invasion front: a hammock forest in central Florida; an oak-hickory forest in eastern Missouri; and a tropical forest on the Big Island of Hawaii.

The hammock forest, a mix of live oak, cabbage palm, sweet gum and pignut hickory, is being invaded by the flax lily (Dianella ensifolia). Native to Africa and Asia, the lily forms dense mats on the forest floor.

Amur honeysuckle (Lonicera maackii), a mid-story shrub introduced from East Asia as an ornamental to provide bird habitat, is the issue in the oak-hickory forests. 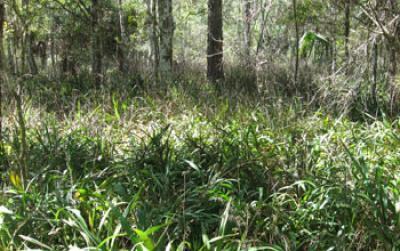 The fire tree (Morella faya), a canopy tree that boosts nitrogen levels in the soil, making it inhospitable to native species and more suitable for invasives, is the troublemaker in the Hawaiian forest.

Invasives don't just sweep the board

"We counted the number of species per unit area in plots that varied in size from one meter square to 500 meters square--a quarter the size of a football field--on either side of the invasion front and then plotted the number of species against the size of the plot," Powell says. "At small scales, invaded plots had many fewer species than uninvaded plots, but they picked up species more rapidly. At broad scales the invasives' effect on diversity virtually disappeared."

The reason for this "scale effect" is probability, says Powell. "Invasives reduce the number of individual plants in a plot, and if there are fewer plants, there are fewer species," she says.

What it means for gardeners

The research helps to explain seemingly contradictory findings in the scientific literature, but what does it mean for people who've been hacking down honeysuckle in their backyards, and brushing their boots before entering conservation areas to avoid bringing in invasives?

Is it worth it or not?

"Invasive species are a serious threat. If we're going to deal with them, we need the cooperation of the public." Invasive plants have negative effects on plant communities at smaller scales--the scales that are crucial for ecosystem services like water management and nutrient cycling.

It was seeded by birds carrying honeysuckle berries from backyards. To prevent it from turning nature preserves into shrub monocultures, people must remove it from their yards or choose not to plant it in the first place.

While the small scale justifies the fight, the large scale offers hope.

Which means that it's not too late to restore habitat and increase abundances of native species, says Knight, "so they can contribute to critical ecosystem services and are less vulnerable to extinction." 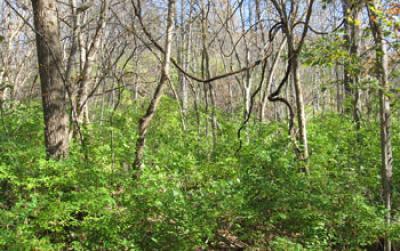 This is a stand of the invasive plant Amur honeysuckle at the Tyson Research Center in Missouri.