Tapping out a beat may help children learn difficult fraction concepts, according to new findings due to be published in the journal Educational Studies in Mathematics. An innovative curriculum uses rhythm to teach fractions at a California school where students in a music-based program scored significantly higher on math tests than their peers who received regular instruction.

"Academic Music" is a hands-on curriculum that uses music notation, clapping, drumming and chanting to introduce third-grade students to fractions. The program, co-designed by San Francisco State University researchers, addresses one of the most difficult -- and important -- topics in the elementary mathematics curriculum.

"If students don't understand fractions early on, they often struggle with algebra and mathematical reasoning later in their schooling," said Susan Courey, assistant professor of special education at San Francisco State University. "We have designed a method that uses gestures and symbols to help children understand parts of a whole and learn the academic language of math."

The program has shown tangible results at Hoover Elementary School in the San Francisco Bay Area, where Courey's study included 67 students. Half the group participated in a six-week Academic Music curriculum and the rest received the school's regular math instruction.

Students in the music-based program scored 50 percent higher on a fraction test, taken at the end of the study, compared to students in the regular math class.

Significant gains were made by students who struggle with academics. The researchers compared the test scores of lower-performing students in both groups and found that those who were taught the experimental music curriculum scored 40 percent higher on the final fractions test compared to their lower performing peers in the regular math class.

"Students who started out with less fraction knowledge achieved final test scores similar to their higher-achieving peers," Courey said. "Lower-performing students might find it hard to grasp the idea of fractions from a diagram or textbook, but when you add music and multiple ways of learning, fractions become second nature to them." 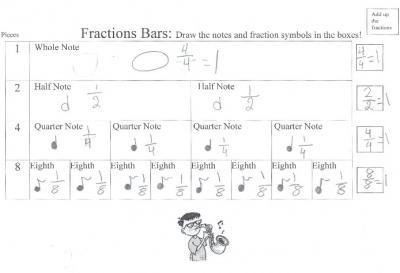 This is a worksheet from an innovative curriculum that uses musical notes and rhythm exercises to teach fractions to third-grade students. The program was devised by San Francisco State University Professor Sue Courey and is the subject of a new study published in Educational Studies in Mathematics.

Courey devised Academic Music with music teacher Endre Balogh. They borrowed aspects from the Kodaly method, a Hungarian approach to music education that incudes movement, songs and nicknames for musical notes, such as "ta-ah" for a half note.

The program has also proven itself at Allen Elementary School, a San Bruno public school -- not included in the study -- that has been using the Academic Music program since 2007.

"Academic Music brings music into the classroom and gets children to learn math in a different way that's symbolic and not dependent on language," said Kit Cosgriff, principal at Allen Elementary School, who introduced the program to help the schools' diverse student body learn math in ways that are not language-based. The school serves many students from low-income families, and 60 percent of students don't speak English as their first language.

"In every lesson I've observed, the children have been excited and enthusiastic about learning fractions," Cosgriff said. "It's a picture of what you would like every class to look like."

Academic Music is a 12-lesson program that is designed to be taught by regular classroom teachers without the help of a music teacher. Courey's next step is to publish curriculum materials for teachers.

"We're suggesting that teachers put music in their arsenal of tools for teaching math." Courey said.

"It's fun, it doesn't cost a lot, and it keeps music in the classroom."

"Academic Music: Music Instruction to Engage Third Grade Students in Learning Basic Fraction Concepts" has been accepted for press in the journal Educational Studies in Mathematics and will be published online next week.