Recently, many U.S. Internet service providers have fallen in line with their international counterparts in capping monthly residential broadband usage. A new study by a Georgia Tech researcher, conducted during an internship at Microsoft Research, shows such pricing models trigger uneasy user experiences that could be mitigated by better tools to monitor data usage through their home networks.

Home users, the study found, typically manage their capped broadband access against three uncertainties—invisible balances, mysterious processes and multiple users—and these uncertainties have predictable impacts on household Internet use and can force difficult choices on users. Given the undeniable trend in both Internet norms (such as cloud-based applications) and home-entertainment delivery toward greater broadband requirements, the study seeks to create awareness and empathy among designers and researchers about the experience of Internet use under bandwidth caps.

Marshini Chetty, a postdoctoral researcher in Georgia Tech's School of Interactive Computing, interviewed 12 households in South Africa, a country in which broadband caps were universal until February 2010. Typically, the caps set by South African ISPs are severe with some plans only offering 1 GB of data per month. At the time of the study, the caps ranged up to 9GB of data, far lower than the 150GB-250GB caps set by U.S. providers.

What Chetty and her collaborators found were coping mechanisms built into South Africans' daily lives in order to manage their online activities under the caps. For example, some would routinely "top up" their accounts (pay additional fees for incremental cap increases), while others would visit family members to use their Internet accounts, or switch from desktop connectivity to smartphones. And with few (if any) ways for customers to monitor Internet usage throughout the month, their access often would be cut off in the middle of performing an online activity.

"People's behavior does change when limits are placed on Internet access—just like we've seen happen in the smartphone market—and many complain about usage-based billing, but no one has really studied the effects it has on consumer activity," said Chetty, who earned her Ph.D. in computer science from Georgia Tech in 2011. "We would also hear about people 'saving' bandwidth all month and then binge downloading toward the end of their billing period." 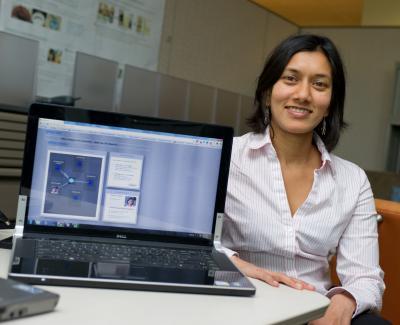 Georgia Tech postdoctoral researcher Marshini Chetty of the School of Interactive Computing has shown that capped broadband service often forces users into risky decisions that could be mitigated by providing them better tools to monitor and manage their home networks.

"Mysterious processes" refers to customers' inability to determine which applications are eating up their bandwidth, ranging from being unaware that streaming video or downloading songs consumes much more data than normal web browsing, to not knowing that many background applications (such as automatic software updates) count against the monthly cap.

"We were surprised to learn that many of the households we studied chose not to perform regular software updates in order to manage their cap," Chetty said. "This activity can be benign for some applications, inadvisable for others and downright dangerous in certain cases. For example, not installing security patches on your system can leave you vulnerable to viruses and other sorts of cyber attacks." Chetty suggested that the frequency of such risky behaviors among the broader population of metered/capped Internet users should be assessed via follow-up scientifically representative surveys.

Finally, in households with multiple Internet users, it can be difficult for the heads of the household to manage overall activity when they are not fully aware of each member's Internet use. As with other consumable resources in a household, from milk to hot water, the apportionment of "fair" amounts of bandwidth reflects family practices and requires a fair bit of nuance, varying by family style and composition.

"As ISPs move more toward usage-based pricing, we need to keep in mind the reactive behaviors that consumers adopt and the consequences of those behaviors. Because when you have broadband caps, you will use the Internet differently," Chetty said. "This study was performed in South Africa, and although the caps are higher in the United States, there are still instances where people are hitting them. So if you're going to have caps, you should empathize with your users and offer ways for customers to see how their data are being used and who is using them." More tools are becoming available, from ISPs, within operating systems and from third parties; but this is one of the first academic studies that systematically reveals why there is a demand for such tools, and why they are important to users.

The study's findings are summarized in the paper, "'You're Capped!' Understanding the Effects of Bandwidth Caps on Broadband Use in the Home," which Chetty will present on May 10 at the 2012 ACM SIGCHI Conference on Human Factors in Computing Systems (CHI 2012), being held May 5-10 in Austin, Texas. Chetty's coauthors include Beki Grinter, professor in the Georgia Tech School of Interactive Computing, and Richard Banks, A.J. Bernheim Brush and Jonathan Donner from Microsoft Research. The paper is one of nine Georgia Tech entries in the main program of CHI 2012.