Genes predict if medication can help you quit smoking

AUDIO: Smoking researchers at Washington University School of Medicine in Sr. Louis have found that the same genetic variations that make it difficult for some smokers to quit also increase the... Click here for more information.

The same gene variations that make it difficult to stop smoking also increase the likelihood that heavy smokers will respond to nicotine-replacement therapy and drugs that thwart cravings, a new study shows.

The research, led by investigators at Washington University School of Medicine in St. Louis, will appear online May 30 in the American Journal of Psychiatry.

The study suggests it may one day be possible to predict which patients are most likely to benefit from drug treatments for nicotine addiction.

"Smokers whose genetic makeup puts them at the greatest risk for heavy smoking, nicotine addiction and problems kicking the habit also appear to be the same people who respond most robustly to pharmacologic therapy for smoking cessation," says senior investigator Laura Jean Bierut, MD, professor of psychiatry. "Our research suggests that a person's genetic makeup can help us better predict who is most likely to respond to drug therapy so we can make sure those individuals are treated with medication in addition to counseling or other interventions."

For the new study, the researchers analyzed data from more than 5,000 smokers who participated in community-based studies and more than 1,000 smokers in a clinical treatment study. The scientists focused on the relationship between their ability to quit smoking successfully and genetic variations that have been associated with risk for heavy smoking and nicotine dependence.

In the clinical treatment trial, individuals with the high-risk variants were three times more likely to respond to drug therapy, such as nicotine gum, nicotine patches, the antidepressant buproprion and other drugs used to help people quit. 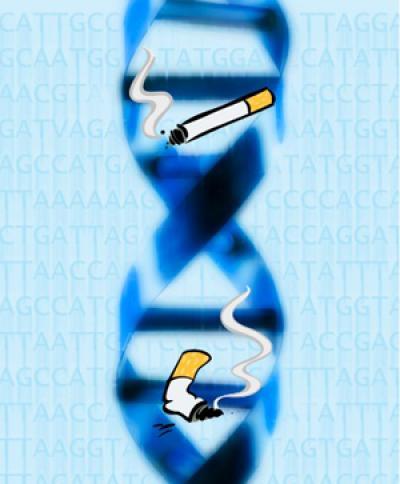 High-risk genetic variations can increase the risk for nicotine dependence, but the same gene variants predict a more robust response to anti-smoking medications.

Tobacco use is the leading cause of preventable illness and death in the United States and a major public health problem worldwide. Cigarette smoking contributes to the deaths of an estimated 443,000 Americans each year. Although lung cancer is the leading cause of smoking-related cancer death among both men and women, tobacco also contributes to other lung problems, many other cancers and heart attacks.

Bierut and Chen say that the gene variations they studied are not the only ones involved in whether a person smokes, becomes addicted to nicotine or has difficulty quitting. But they contend that because the same genes can predict both heavy smoking and enhanced response to drug treatment, the genetic variants are important to the addiction puzzle.

"It's almost like we have a 'corner piece' here," Bierut says. "It's a key piece of the puzzle, and now we can build on it. Clearly these genes aren't the entire story — other genes play a role, and environmental factors also are important. But we've identified a group that's responding to pharmacologic treatment and a group that's not responding, and that's a key step in improving, and eventually tailoring, treatments to help people quit smoking."

Since people without the risky genetic variants aren't as likely to respond to drugs, Bierut says they should get counseling or other non-drug therapies.

"This is an actionable genetic finding," Chen says. "Scientific journals publish genetic findings every day, but this one is actionable because treatment could be based on a person's genetic makeup. I think this study is moving us closer to personalized medicine, which is where we want to go."

And Bierut says that although earlier studies suggested the genes had only a modest influence on smoking and addiction, the new clinical findings indicate the genetic variations are having a big effect on treatment response.

"These variants make a very modest contribution to the development of nicotine addiction, but they have a much greater effect on the response to treatment. That's a huge finding," she says.