Melbourne researchers have shown a type of leukaemia can be successfully 'reversed' by coaxing the cancer cells back into normal development.

The discovery was made using a model of B-progenitor acute lymphoblastic leukaemia (B-ALL), the most common cancer affecting children.

Researchers from the Walter and Eliza Hall Institute showed that switching off a gene called Pax5 could cause cancer in a model of B-ALL, while restoring its function could 'cure' the disease.

Institute researchers Dr Ross Dickins and Ms Grace Liu led the study with institute colleagues and collaborators in Vienna. The study was published today in the journal Genes & Development.

"Along with other genetic changes, deactivating Pax5 drives normal blood cells to turn into leukaemia cells, which has been shown before," Ms Liu said. "However we showed for the first time that reactivating Pax5 enabled the cells to resume their normal development and lose their cancer-like qualities, effectively curing the leukaemia. What was intriguing for us was that simply restoring Pax5 was enough to normalise these cancer cells, despite the other genetic changes." 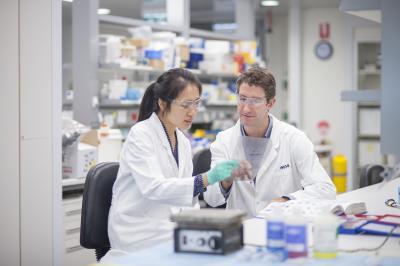 Melbourne researchers have shown a type of leukaemia can be successfully 'reversed' by coaxing the cancer cells back into normal development.

Dr Ross Dickins (right) and Ms Grace Liu (left) led a research team from the Walter and Eliza Hall Institute of Medical Research in Melbourne, Australia, that showed switching off a gene called Pax5 could cause cancer in a model of B-progenitor acute lymphoblastic leukaemia, while restoring its function could 'cure' the disease.

In leukaemia, immature white blood cells replicate abnormally and build up in the bone marrow, interfering with production of normal blood cells.

Ms Liu said Pax5 was a gene frequently 'lost' in childhood B-ALL. "Pax5 is essential for normal development of a type of white blood cells called B cells," she said. "When Pax5 function is compromised, developing B cells can get trapped in an immature state and become cancerous. We have shown that restoring Pax5 function, even in cells that have already become cancerous, removes this 'block', and enables the cells to develop into normal white blood cells."

Dr Dickins said the research shed light on the function of Pax5, which was one of about 100 genes known to 'suppress' human tumours. "When these tumour suppressor genes are inactivated by changes to the DNA, cancers start to develop," Dr Dickins said.

Dr Dickins said forcing B-ALL cells to resume their normal development could provide a new strategy for treating leukaemia. "While B-ALL has a relatively good prognosis compared with other cancers, current treatments can last years and have major side-effects. By understanding how specific genetic changes drive B-ALL, it may be possible to develop more specific treatments that act faster with fewer side-effects."

However Dr Dickins said that genes that are lost in tumour cells are not traditionally drug targets. "It is very difficult to develop drugs that restore the function of genes that are lost during cancer development," Dr Dickins said. "However by understanding the mechanisms by which Pax5 loss causes leukaemia, we can begin to look at ways of developing drugs that could have the same effect as restoring Pax5 function."

The genetic switch technology used to study Pax5 could also be used to understand 'tumour suppressor' genes in other cancers, he said.