BUFFALO, N.Y. – The bacteria Streptococcus pneumoniae harmlessly colonizes the mucous linings of throats and noses in most people, only becoming virulent when they leave those comfortable surroundings and enter the middle ears, lungs or bloodstream. Now, in research published in July in mBio, University at Buffalo researchers reveal how that happens.

"We were asking, what is the mechanism behind what makes us sick?" explains Anders P. Hakansson, PhD, assistant professor of microbiology and immunology in the UB School of Medicine and Biomedical Sciences. "We are looking to find ways to interfere with the transition to disease. Few have looked at the specific mechanism that suddenly makes these bacteria leave the nose where they typically prefer to reside and travel into the lungs or the middle ear where they cause disease. If we can understand that process, then maybe we can block it."

Hakansson and his colleagues had previously found that when the pneumococci colonize the nose, they form sophisticated, highly structured biofilm communities.

In the current study, the research team grew biofilms of pneumococci on top of human epithelial cells, where the bacteria normally grow. They then infected these bacteria with influenza A virus or exposed them to the conditions that typically accompany the flu, including increased temperature to mimic fever, increased concentrations of ATP (the energy molecule in cells), and the stress hormone norepinephrine, released during flu infection.

All three stimuli triggered a sudden release and departure of bacteria from the biofilm in the nose into otherwise normally sterile organs, such as the middle ears and lungs or into the bloodstream. At the same time, the researchers found that the gene expression profile of the bacteria that had dispersed from the biofilms revealed far more virulence.

Hakansson says the research demonstrates how the mammalian and bacterial kingdoms interact. "Humans are the only natural hosts for these bacteria," he explains, "when the viral infection comes in, there is this interkingdom signaling, where the bacteria respond to host molecules. If we can find ways to interrupt that signaling, we might be able to prevent disease." 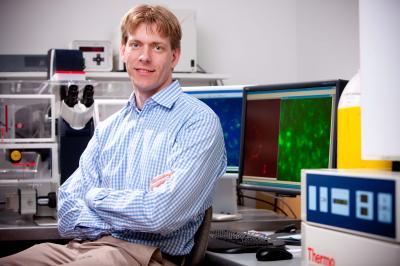 Anders Hakansson, assistant professor of microbiology and immunology at University at Buffalo, says this research demonstrates how the mammalian and bacterial kingdoms interact.