A team of American and Chinese researchers has revealed the color and detailed feather pattern of Microraptor, a pigeon-sized, four-winged dinosaur that lived about 130 million years ago. The non-avian dinosaur's fossilized plumage, which had hues of black and blue like a crow, is the earliest record of iridescent feather color. The findings, which suggest the importance of display in the early evolution of feathers, will be published in the March 9 edition of the journal Science.

"This study gives us an unprecedented glimpse at what this animal looked like when it was alive," said Mark Norell, one of the paper's authors and chair of the American Museum of Natural History's Division of Paleontology. "There's been a lot of speculation about how the feathers of Microraptor were oriented and whether they formed airfoils for flight or whether they had to do with sexual display. So while we've nailed down what color this animal was, even more importantly, we've determined that Microraptor, like many modern birds, most likely used its ornate feathering to give visual social signals." 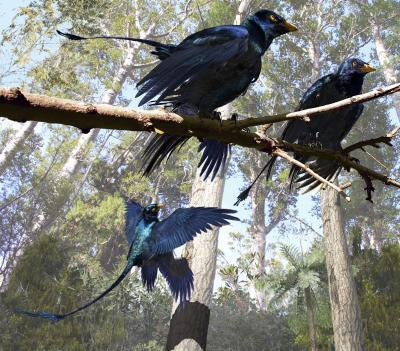 This is an artist's recreation of Microraptor, a pigeon-sized, four-winged dinosaur that lived about 130 million years ago. Recent research has shown that the dinosaur had iridescent plumage.

Although its anatomy is very similar to birds, Mircroraptor is considered a non-avian dinosaur and is placed in the group of dinosaurs called dromaeosaurs that includes Velociraptor. The fossilized specimen used in this study comes from rocks in Northeastern China that are about 130 million years old.

"With numerous fossil discoveries of birds and flowered plants, we knew that the Cretaceous was a colorful world, but now we've further enhanced that view with Microraptor as the first dinosaur to show iridescent color," said Ke-Qin Gao, a coauthor of the study and researcher from Peking University in Beijing. "Just a few years ago it would have been inconceivable for us to have imagined doing a study like this."

The feather color displayed by many modern birds is produced partially by arrays of pigment-bearing organelles called melanosomes, about a hundred of which can fit across a human hair. Generally found in a round or cigar-like shape, a melanosome's structure is constant for a given color. With the imaging power of scanning electron microscopes, paleontologists recently started analyzing the shape of melanosomes in well-preserved fossilized feather imprints. By comparing these patterns to those in living birds, scientists can infer the color of dinosaurs that lived many millions of years ago. Iridescence arises when the melanosomes are organized in stacked layers.

"Modern birds use their feathers for many different things, ranging from flight to thermoregulation to mate-attracting displays," said Matt Shawkey, a co-author and associate professor of biology at the University of Akron. "Iridescence is widespread in modern birds and is frequently used in displays. Our evidence that Microraptor was largely iridescent thus suggests that feathers were important for display even relatively early in their evolution." 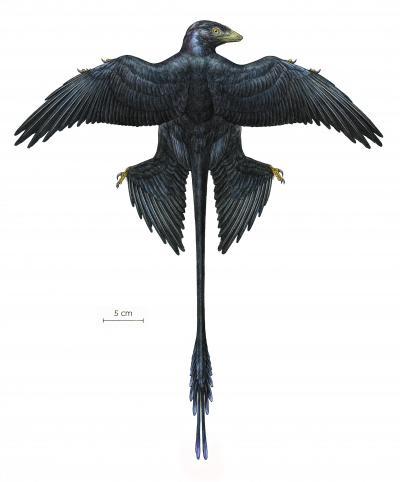 This is a reconstruction of a Microraptor based on digital overlays of nine fossilized specimens. Microraptor was a pigeon-sized, four-winged dinosaur that lived about 130 million years ago.

In this study, the researchers compared melanosome shape and density from a Microraptor fossil at the Beijing Museum of Natural History to a database of melanosomes from a variety of modern birds. Statistical analysis of the data predicts that Microraptor was completely black with a glossy, weakly iridescent blue sheen.

The researchers also made predictions about the purpose of the dinosaur's tail. Once thought to be a broad, teardrop-shaped surface meant to help with flight, Microraptor's tail fan is actually much narrower with two elongate feathers. The researchers think that the tail feather was ornamental and likely evolved for courtship and other social interactions, not for aerodynamics.

"Most aspects of early dinosaur feathering continue to be interpreted as fundamentally aerodynamic, optimized for some aspect of aerial locomotion," said Julia Clarke, one of the paper's co-authors and an associate professor of paleontology at The University of Texas at Austin. "Some of these structures were clearly ancestral characteristics that arose for other functions and stuck around, while others may be linked to display behaviors or signaling of mate quality. Feather features were surely shaped by early locomotor styles. But, as any birder will tell you, feather colors and shapes may also be tied with complex behavioral repertoires and, if anything, may be costly in terms of aerodynamics."

These findings also contradict previous interpretations that Microraptor was a nocturnal animal because dark glossy plumage is not a trait found in modern nighttime birds. 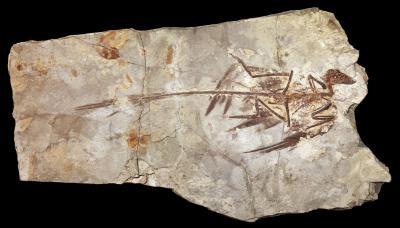 This is a fossilized Microraptor specimen from the Beijing Museum of Natural History. Microraptor was a pigeon-sized, four-winged dinosaur that lived about 130 million years ago.