Force to be reckoned with: NIST measures laser power with portable scale

Researchers at the National Institute of Standards and Technology (NIST) have demonstrated a novel method for measuring laser power by reflecting the light off a mirrored scale, which behaves as a force detector.

Although it may sound odd, the technique is promising as a simpler, faster, less costly and more portable alternative to conventional methods of calibrating high-power lasers used in manufacturing, the military and research.

Optical power has traditionally been measured by comparing it to electrical units. Researchers aim a laser at a coated detector, measure the detector's temperature change, and then determine the electrical power needed to generate an equivalent amount of heat. This method is extremely accurate but difficult with high-power lasers, because it requires slow heating and cooling of massive absorbers. Most absorbers cannot withstand the destructive powers of lasers used for cutting and melting.

Laser power also can be measured by comparison to a reference mass, which is what scales measure, or an equivalent force. This idea is almost as old as the laser but only recently became practical. Large lasers like industrial cutting tools, with output power of 4 to 6 kilowatts, and military lasers with output power of 10 to 100 kilowatts are becoming more common, and they exert enough force to be measured relatively easily. Researchers also now have access to precision scales that can be fitted with mirrors and have the capability to operate either vertically or horizontally. The only limiting dimension is that the mirror needs to be large enough to reflect the laser beam. 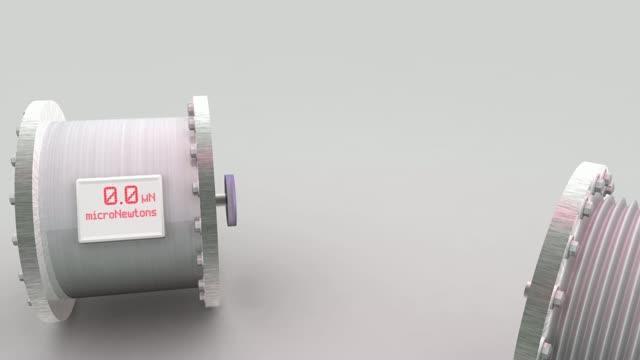 This is an animation of new laser power measurement technique.

NIST's measurement technique, described in a new paper,* measures a laser's force, or the push exerted on a mirror by the streaming photons (light particles). The result, measured in either milligrams (mass) or microNewtons (force), is used to calculate optical power. The scale is first positioned horizontally to be calibrated with a mass placed on top. This "self-calibration" feature means the instrument, if used in the field, would not need to be transported to NIST or somewhere else for periodic evaluations. When used to measure a laser's force, the scale is positioned vertically to be compatible (and safe) with large lasers that typically are mounted horizontally.

Perhaps most intriguingly, light power output can be measured while the laser is being used, thus not wasting any light. The beam is simply reflected off the mirror and directed to a target.

NIST researchers have developed and tested a prototype setup with infrared lasers and a commercial scale. The tabletop scale weighs less than 25 pounds. NIST researchers expect the setup would ultimately be about one-fifth the cost of the traditional approach and produce results in about one-tenth the time (less than 2 seconds). The methods are projected to have comparable accuracy of plus or minus 1 percent.