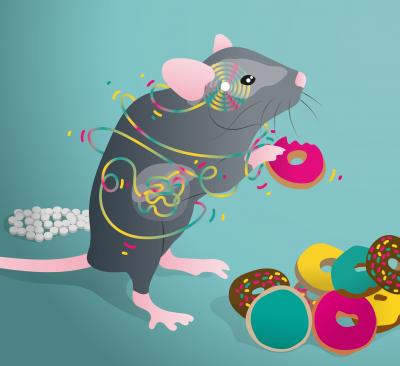 Food has something of a "magic hold" on us, as certain flavors and textures can pretty much dictate what we do. Just think about the spicy dish that keeps bringing you back to that remote Chinese restaurant, or the irresistibly creamy but expensive ice-cream at the Italian place on the corner.

But is it only your palate that controls your food choices? It may feel like it, but the answer is no. In fact, much of what is going on happens beyond the walls of your mouth, through interactions between your digestive system and your brain.

What are your digestive and nervous systems talking about, and how can it influence your behavior? The group of Albino Oliveira-Maia, head of the Neuropsychiatry Unit at the Champalimaud Centre for the Unknown in Lisbon, Portugal, has been working on finding answers to these questions. The team's most recent set of results - describing a novel digestive-brain axis they had identified in mice - were published today (April 6, 2020) in the scientific journal Neuron.

"The mouth is the first checkpoint - deciding whether the food should be accepted or rejected", explains Oliveira-Maia. "Once inside, the food is broken up into nutrients, and the post-ingestive phase begins. "In this phase, it's the digestive system's turn to 'taste' the food and talk to the brain about your meal choice".

According to Oliveira-Maia, post-ingestive processes can be divided into two types. The first deals with the present - how nutritious the food is and how much of it should be consumed. The second is a learning process that determines how the organism should respond to the same food in the future.

An example of this "post-ingestive learning" is when the body's appraisal of the food's nutritional value leads an individual to develop a preference towards it. How would that work? Imagine two foods that taste exactly the same but have different nutritional values: one is high, and the other is low. According to decades of studies, post-ingestive learning leads both animals and humans to develop a preference for the more nutritious food. It actually makes sense because it is in the organism's best interest to identify which food is more nutritious and opt for that food when possible.

Oliveira-Maia and his team wondered whether these same post-ingestive signals might be involved in other types of learning. More precisely, they asked whether they could lead animals to actively seek out certain foods.

To study this question, the team developed a task in which animals would press levers to receive a direct injection of food into their stomach. "It was important to do it this way to eliminate the palatable aspects of the food and focus purely on its post-ingestive effects", explains Ana Fernandes, the first author of the study. "In one experiment, we made two levers available to the mice: one that triggered the injection of high-calorie food and another that triggered the injection of low-calorie food. Then, we allowed them to choose freely between the two levers and observed their response."

The results of the experiment were clear: even though the mice were not able to taste the food, they ended up spending their efforts on the "high-calorie" lever.

With this novel experimental paradigm, the team established a new form of post-ingestive learning. Next, they proceeded to pin down the physiological mechanism involved.

To study the learning mechanism, the team first asked how information about the nutritional value of the food reaches the brain? "To answer this question, we focused on the Vagus Nerve. This is a long nerve that forms bi-directional connections between the brain and multiple internal organs", says Oliveira-Maia.

According to Oliveira-Maia, most research on the relation of the Vagus Nerve and feeding behavior concentrated on the nerve's connections with the gut. But he and his team decided to take a different approach. "Results from my previous work, indicated that a specific branch of the Vagus Nerve might be involved - the one that carries information that comes from the liver."

Why would the liver be particularly important for this learning process, instead of the gut? "Different parts of the gut may have incomplete information about the nutritional value of the food that is being eaten. The liver, on the other hand, metabolically filters the blood arriving from most of the gut. This means that it's well-positioned to function as an overall metabolic sensor", Fernandes explains.

And indeed, when the team tested their hypothesis by lesioning the hepatic branch of the Vagus Nerve, the mice were unable to acquire this new type of learning. This supported their assumption that this specific branch is the one sensing and relaying post-ingestive signals to the brain during the learning process.

From the gut to the brain and back again

This exciting finding raised a pressing question: where in the brain were the post-ingestive signals being sent to?

The team began with the first immediate suspect - dopamine - a molecule involved in various cognitive processes. Multiple studies have illustrated an association between feeding and dopamine neurons in the brain. However, direct links between post-ingestive signals and the activity of these neurons had not been demonstrated.

The team implemented several experimental approaches to study whether dopamine neurons were involved in the post-ingestive learning they had discovered. Their conclusions provided concrete proof that they are.

"An important component of the study was the discovery that dopamine neurons were involved in this new learning process", says Rui Costa, also a senior author of the study.

The team was able to demonstrate not only that these neurons were sensitive to post-ingestive signals, but also that their activity was necessary for the learning to occur. And to complete the picture, the final experiment tested whether the neurons were influenced by the hepatic branch of the vagus nerve. Again, the answer was yes: when the branch was cut, the neurons' response to post-ingestive signals was significantly reduced.

Why would dopamine neurons, in particular, be part of this learning process? "Dopamine neurons have been shown to respond to reward, for example when a sweet treat reaches our tongue", explains Costa. "This study shows that these neurons are also activated when foods reach the stomach and intestine. Furthermore, we showed that the activation of dopamine neurons when nutrients reach the gut is critical for driving food-seeking behaviors."

Together, the results of the study reveal a novel learning process - orchestrated between the digestive system and the brain - that compels animals to seek out food that they never actually tasted. This testifies to the potency of the subconscious processes that control behavior.

Oliveira-Maia believes this work provides fundamental insight into how unique patterns of feeding behavior emerge. And while it might not have immediate clinical applications, he believes that this work is ultimately relevant for understanding and treating eating-related disorders such as obesity. "It's very early to say what will come from this work down the line. Still, the inspiration regarding the relationship between dopamine receptors and obesity is a big part of why we did this work in the first place", he concludes.