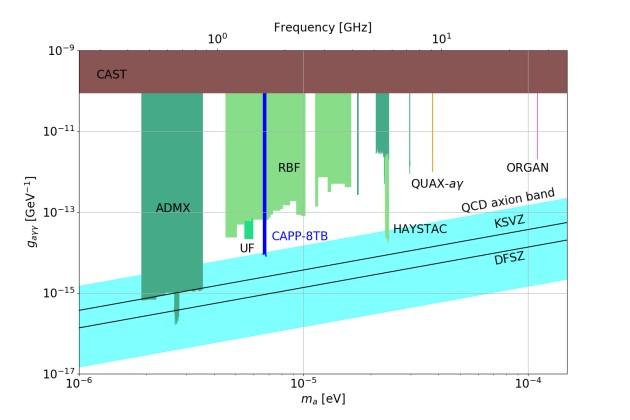 Researchers at the Center for Axion and Precision Physics Research (CAPP), within the Institute for Basic Science (IBS, South Korea), have reported the first results of their search of axions; elusive ultra-lightweight particles that could constitute the mysterious dark matter. IBS-CAPP is located at Korea Advanced Institute of Science and Technology (KAIST). Published in Physical Review Letters, the analysis combines data taken over three months with a new axion-hunting apparatus developed for the last two years.

Proving the existence of axions could solve two of the biggest mysteries in modern physics at once: why galaxies orbiting within galaxy clusters are moving far faster than expected, and why two fundamental forces of nature follow different symmetry rules. The first conundrum was raised back in the 1930s, and was confirmed in the 70s when astronomers noticed that the observed mass of the Milky Way galaxy could not explain the strong gravitational pull experienced by the stars in the galaxies. The second enigma, known as the strong CP problem, was dubbed by Forbes magazine as "the most underrated puzzle in all of physics" in 2019.

Symmetry is an important element of particle physics and CP refers to the Charge+Parity symmetry, where the laws of physics are the same if particles are interchanged with their corresponding antiparticles (C) in their mirror images (P). In the case of the strong force, which is responsible for keeping nuclei together, CP violation is allowed theoretically, but has never been detected, even in the most sensitive experiments. On the contrary, the CP symmetry is violated both theoretically and experimentally in the weak force, which underlies some types of radioactive decays. In 1977, theoretical physicists, Roberto Peccei and Helen Quinn proposed the Peccei-Quinn symmetry as a theoretical solution to this problem, and two Nobel laureates in Physics, Frank Wilczek and Steven Weinberg, showed that the Peccei-Quinn symmetry results in a new particle: the axion. The particle was named after an American detergent, because it should clean the strong interactions mess.

Currently, it is estimated that 85% of matter in the Universe is dark, that is imperceptible. Dark matter provides enough mass to hold our sun from leaving the Milky Way, but it is not visible under ordinary conditions. In other words, axions are expected to be present in large amount in the Universe, but to barely interact with the particles that are familiar to us.

According to the predictions and Fermi's golden rule, an axion transforms spontaneously into two detectable particles (photons) at an extremely low rate, and this conversion can be faster in an environment where one of the photons is already present. In experiments, that role is played by a strong magnetic field, which provides (virtually) photons of all energy levels, speeding up the process tremendously.

To facilitate the axion-to-photon conversion, IBS researchers used their custom made CAPP-8TB haloscope. This instrument has a cylinder-shaped superconducting magnet with a clear bore of 165 mm and a central magnetic field of 8 Tesla. The signal of the axion-spawned photons is amplified in a resonant cavity. If the right frequency is chosen, the photons would resonate in the cavity and mark their presence with a little flash. The team would need to detect about 100 microwave photons per second to make a confident statement.

"This experiment is not a 100-meter sprint, but the first goal in a marathon run. We learned by doing and we tested new concepts to be used at higher-level systems in the future," explains Yannis K. Semertzidis, the director of the Center and also a professor of KAIST.

In this experimental run, the team searched axions with a mass between 6.62 and 6.82 μeV, corresponding to the frequency between 1.6 and 1.65 GHz, a range that was selected by quantum chromodynamics. The researchers showed experimentally with a 90% confidence level, which is the most sensitive result in the mass range to date, that there is no axion dark matter or axion-like particle within that range. In this way, CAPP-8TB takes its place among other axion-hunting experiments that are looking at various possible masses. Moreover, this is the only experiment at that mass range that reaches near the sensitivity required according to the two most famous theoretical models about axions: the KSVZ model and the DFSZ model. The letters are abbreviations that refer to the scientists who proposed them.

"We proved that we can reach much better sensitivity than all other experiments in that frequency range and that we are ready to scale up our research with larger systems. We aim to be at the top of our field for the next ten years! That's why it's so exciting!" enthuses research engineering fellow Soohyung Lee, the first author of the study.

The mass range is determined by the diameter of the cavity. A bigger diameter can search a lower mass region and vice versa. Since CAPP-8TB's resonant cavity is placed inside the clear bore of the superconducting magnet, IBS researchers designed a tunable copper cylindrical cavity as a resonator with the maximum available volume.

Beyond the cavity, the CAPP-8TB haloscope boasts a number of cutting-edge technologies, including a cryogenic dilution refrigerator reaching -273 degrees Celsius (just about 50 mK above absolute zero), a superconducting magnet with a strong magnetic field, low-noise microwave electronics and state-of-the-art amplifiers.

The plan of the Center is to look for axions tuning the haloscope at a frequency of 1-10 GHz, and later of 10-25 GHz using a more powerful magnet with large volume, implementing all their inventions. The search for axions continues nonstop.