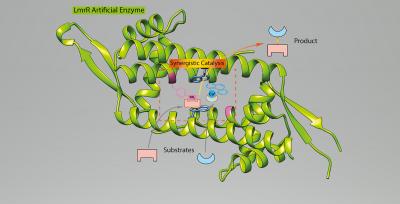 IMAGE: This illustration shows the structure of the LmrR protein (green), with the two added catalytic groups binding to their substrates.

Scientists at the University of Groningen turned a non-enzymatic protein into a new, artificial enzyme by adding two abiological catalytic components: an unnatural amino acid and a catalytic copper complex. This is the first time that an enzyme has been created using two non-biological components to create an active site. The study demonstrates that such a synergistic combination is a powerful approach to achieving catalysis that is normally outside the realm of artificial enzymes. The study was published in Nature Catalysis on 10 February.

Enzymes are natural catalysts that operate under mild conditions. This makes them an attractive alternative for industrial chemical catalysis, which may require high temperature and pressure and toxic solvents or metals. However, not all chemical reactions can be catalysed by natural enzymes. Modifying existing enzymes is one option but University of Groningen Professor of Biomolecular Chemistry Gerard Roelfes believes that creating new enzymes could be another valuable option.

'Natural enzymes evolved to catalyse specific reactions. Adapting requires a kind of devolving of the enzyme. That is why we pioneered the creation of new, unnatural enzymes,' he says. In 2018, he created a non-enzymatic protein, the bacterial transcription factor LmrR, which could form non-biological hydrazone structures after the insertion of the unnatural amino acid p aminophenylalanine. This was the first enzyme created using an unnatural amino acid as a catalytic group.

This time, Roelfes and his postdoc Zhi Zhou used the same LmrR protein and added two abiological catalytic components to it: one was the same unnatural amino acid p aminophenylalanine and the other a copper-containing complex. Both can activate the reaction partners for the classic Michael addition reaction, which is widely used in organic chemistry to create carbon-carbon bonds. 'But they both have to be in the right position to efficiently and selectively catalyse this reaction,' says Roelfes. Just adding both components to a test tube would not work: 'In fact, they cancel each other out when they come too close.'

The copper-containing complex attaches itself to the doughnut-shaped LmrR protein through supramolecular bonds. 'Its position is determined by the interaction with the protein,' explains Roelfes. 'From this position, we determined where the p-aminophenylalanine should be inserted into the protein to create an active site.' The catalytic part of this amino acid is an aniline side chain. 'From my experience in organic chemistry, I knew the potential utility of this aniline side chain for catalysis and envisioned that it would be possible to combine it with copper catalysis.' When the novel enzyme was constructed, it turned out that Roelfes' ideas were spot on: the adapted protein turned out to be a very selective catalyst for the Michael addition.

'This was a proof of principle study,' says Roelfes. 'The enzyme is not yet fast enough for practical use but, with standard techniques such as directed evolution, this could be improved.' The experiment does show that it is possible to create a new enzyme using two abiological catalysts. Other types of new catalytic enzymes could be created in a similar way. 'The method we used required that the molecular biological technique for insertion of the unnatural amino acids could be used by chemists like us,' says Roelfes. This is now the case and the scientists in his group are trying to create more artificial enzymes.

So far, adding unnatural amino acids to enzymes has been used mostly to study catalytic mechanisms and to probe the structure-function relationship of enzymes. Recently, Roelfes published a Perspective article in Nature Catalysis(1) together with his former PhD student Ivana Drienovská (now at the Graz University of Technology), describing the use of genetically encoded non-canonical amino acids in enzymes. 'To me, the generation of new-to-nature enzymes is the most exciting option.'

University of Groningen scientists created a new enzyme that can catalyse (speed up) an important reaction in organic chemistry. They added a copper complex to a protein that had no enzymatic properties. Next, they inserted an unnatural amino acid into the protein. Together with the copper, a side chain of the amino acid was able to catalyse the required reaction. The method to add unnatural groups to a protein could be used to design many other new enzymes. These could replace standard chemical catalysis and thereby contribute to making chemistry cleaner and more energy-efficient.