EAST LANSING, Mich. - Around the world, especially in developing nations, counterfeit medicines are a real problem. Until now, in many countries there hasn't been a standard protocol to conduct investigations and pursue prosecution.

New research, led by Michigan State University and featured in the current issue of the Journal of Forensic Science and Criminology, is providing the foundation to apply criminology theory to preventing the production and sale of fake and substandard medicines.

"Our paper provides real-world application of well-respected criminology theory, which is typically unconventional for public health professionals," said John Spink, director of the College of Veterinary Medicine's Food Fraud Initiative, and lead author on the paper. "While there should be more research before reaching additional conclusions, a country's willingness to combat counterfeit and sub-standard medicines may be an indicator of modernization and the stabilizing of a country." 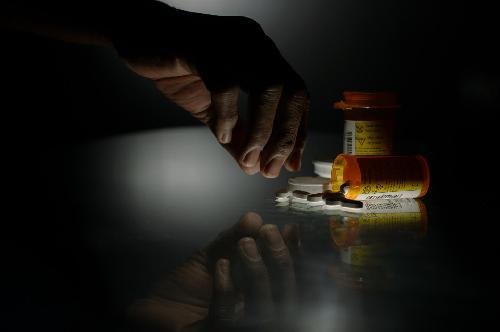 Michigan State University is providing the foundation to apply criminology theory to preventing the production and sale of fake and substandard medicines. Credit: Photo by G.L. Kohuth

Some countries currently deploy an approach of rapid intervention and response. However, even if the speed of policing increases, this tactic is not enough to prevent counterfeiting and protect the public, said Spink, who's also an assistant professor in the College of Veterinary Medicine.

Working with enforcement agencies in Nigeria, Spink and his team studied protocols for crime scene investigation and forensic science. What they learned is applicable to countries around the world that have experienced cases of fraud. Some examples provided by the World Health Organization include:

One key step to stopping instances such as these is to define the factors necessary for a crime to occur. This strategy could allow enforcement agencies to anticipate the conditions that create counterfeiting or fraud opportunities.

"It's important to understand the different types of counterfeits, counterfeiters and counterfeiting organizations before selecting effective countermeasures," said Spink, whose team included MSU's College of Human Medicine's Dr. Douglas Moyer and Dr. Michael Rip. "The goal is to reduce the size of the triangle; increasing the understanding of how and why fraudsters circumvent laws, audits and certifications helps achieve that goal."

In the Nigerian case study, Spink found that the country's efforts had been successful. Between 2000 and 2004, Nigeria reduced counterfeit medicines in its pharmaceuticals market from over 65 percent to 16 percent.

Nigeria's effort to fight this criminal activity remains strong, however, the nation is still at risk because counterfeit and substandard medicines still are widely distributed. It's an arms war between enforcement and fraudsters.

"Let's be clear, though, launching or refinement in countermeasures or detection processes will be met with fraudsters' own countermeasures," he said. "An anti-counterfeit strategy should be dynamic and not be perceived as leading to ultimately fixing something. Preventing counterfeiting is more akin to managing a chronic disease such as diabetes rather than the one-time fix of an acute incident such as a broken leg."

Along with applying criminal theory to thwart the problem, Spink and his team also studied the effect of some practical measures. They showed that field product authentication efforts, regulating the supply chain, consumer awareness initiatives and more can be effective tools in fighting medicinal fraud.