Since 2008, Michigan State University public health expert, Rick Sadler, has been mapping out areas of the city that have had almost no access to healthier food options and evaluating solutions that could help remedy the problem.

The Flint native's most recent study, published in the journal Applied Geography, has found that simply changing the location of a farmers' market to downtown Flint has brought cascading positive effects to residents of the area. 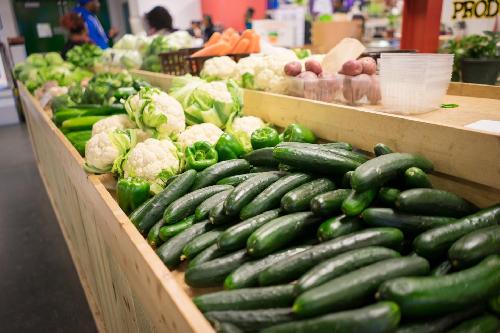 A recent MSU study has shown that the Flint Farmers' Market has not only been good for the city's economy, but for reaching people with challenges in accessing healthier food in the area. Credit: G.L. Kohuth

"The market has not only been good for the local economy, but for reaching people with challenges in accessing healthier food," said Sadler, who is also an assistant professor in the College of Human Medicine. "That's important because farmers' markets are often perceived as being elitist, only benefiting a certain class of folks. Our local market has proven differently and represents a good cross section of the community."

Sadler's research has shown that since its move in 2013, more customers have been coming to the market from neighborhoods representing the two highest classifications of socioeconomic distress. In 2015, 37 percent of residents from these areas frequented the market compared to 31 percent in 2011 when it was located outside of the city.

Locating the market near a bus station has helped too. Results related to how people got there showed that 21 percent of residents took the bus, walked or biked, compared to only 4 percent in 2011.

"The fact that there's been an increase in people coming and having access to healthier food simply because of the move, is a win," Sadler said. "The farmers' market can really be looked at as a catalyst of potentially better things to come."

Economically, the market has brought in more money for the city since its relocation. In 2011, it was estimated that annual direct sales totaled $4.9 million. In 2015, total sales hit nearly $14 million.

Sadler also credits the market's success to offering incentives such as the Double Up Food Bucks program where customers with SNAP, or Supplemental Nutrition Assistance Program, benefits can spend up to $20 on groceries and get another $20 to spend on locally grown fruits and vegetables.

"These incentives eliminate some of the barriers residents often face when accessing these better food options," Sadler said. "The least mobile, most financially distressed people are often constrained to just their immediate surroundings which typically only include fast food, liquor or convenience stores."

Sadler noted that because the city of Flint has lost half of its population, mostly to surrounding suburbs, since the 1960s, the purchasing power of its residents has diminished significantly. This has caused stores to close up or relocate outside of the city. As a result, certain areas have become "food deserts," or places where residents simply don't have access to better quality food.

Using his spatial analysis research, a method that allows scientists to see otherwise invisible patterns of a particular phenomenon on a map, Sadler is working with Flint's local food bank to pinpoint new distribution sites to areas that are underserved. He also continues to work with MSU Extension and the edible flint local food collaborative on helping to identify geographic locations where teaching and implementing urban gardening could benefit residents.

"It's not the WalMarts of the world that are going to save Flint's access to food," Sadler said. "It's strengthening the local food landscape and building sustainable food options like the farmers' market that will help feed the city."