WASHINGTON, DC and NEW YORK (June 19, 2014)— A special federal fund to support community health centers expires after September 2015, creating a funding cliff for primary care clinics located in medically underserved areas. If this funding is not restored, and if more states do not expand Medicaid, the number of patients cared for by safety-net health centers could fall more than 25 percent – or 7 million patients - by 2020. The loss of care for 7 million patients is equivalent to the population of the state of Arizona or the combined populations of Los Angeles and Houston.

These findings are revealed in research conducted by the Geiger Gibson/RCHN Community Health Foundation Research Collaborative at Milken Institute School of Public Health (Milken Institute SPH) at the George Washington University. The study analyzes the impact of government funding decisions on community health center capacity in the coming years and finds that without federal funding and expanded Medicaid, the number of patients served by community health centers will drop from 25.6 million in 2014 to18.8 million by 2020.

As the U.S. population ages and health insurance coverage grows under health reform, the need for primary care continues to rise. But if federal funding declines after 2015 when a special fund established under the Affordable Care Act expires and nearly half of states fail to expand Medicaid, health centers stand to lose a significant amount of their current capacity to reach populations and communities experiencing medical underservice for primary health care.

"Policymakers at both the state and federal level must act to support medically underserved communities that depend on health centers," says lead author of the report, Leighton Ku, PhD, MPH, a professor of health policy and director of the Center for Health Policy Research at Milken Institute SPH. "If they do not, our analysis suggests that millions of low-income Americans could lose the high-quality primary care that can prevent many expensive health conditions from getting worse or developing in the first place."

The report estimates the combined impact of two key policy decisions on health center revenues and patient capacity: the level of core federal grant funding for health centers; and state Medicaid expansions. The Affordable Care Act set aside $11 billion in "mandatory" funding to expand health centers, but this special fund is set to expire after 2015. If this special funding is not continued, health centers would be forced to scale back their services at a time when the need for primary care is growing. 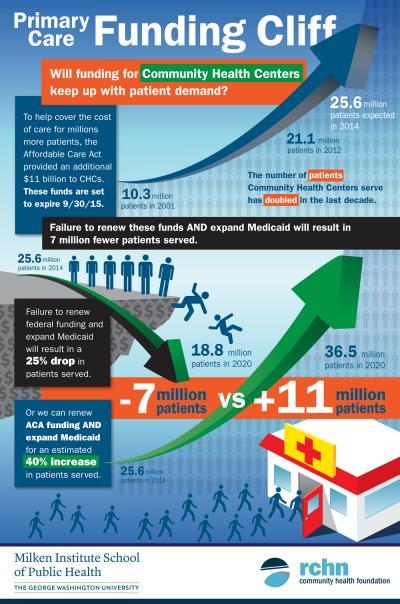 A funding cliff could result in fewer patients served by community health centers.

Another factor that can affect health center capacity is whether states expand Medicaid, the single largest source of revenue for community health centers. About half of all states are currently expanding Medicaid; the other half has either opted out of the expansion or is still considering the decision. Were the opt-out states to expand Medicaid coverage, this would provide a major boost to health centers' patient capacity.

On the other hand, under a scenario in which Congress maintains higher direct funding for health centers and all states expand Medicaid, the number of patients served can be expected to rise to 36.5 million by 2020, as health centers continue to add community sites, services and staff. Such an expansion would particularly benefit residents of medically underserved urban and rural communities who otherwise lack ready access to primary care services, especially adults with serious and chronic health conditions that can be cared for in primary care settings, women of childbearing age, children and the low-income elderly.

"Community health centers can only fulfill the promise of health reform if they have the resources to provide much-needed care to our nation's most vulnerable populations," said Feygele Jacobs, president and CEO of the RCHN Community Health Foundation. "Both the Bush and Obama Administrations supported the expansion of community health centers. Federal and state policy makers should continue to provide bipartisan support for the safety-net for needy patients in underserved areas throughout the country."

The report, "How Medicaid Expansions and Future Community Health Center Funding Will Shape Capacity to Meet the Nation's Primary Care Needs: A 2014 Update," can be found at: go.gwu.edu/ggrchnbrief37