Similar to wings and fins with self-adaptive flaps, the feathers on a diving peregrine falcon's feathers may pop-up during high speed dives, according to a study published in PLOS ONE on February 5, 2014 by Benjamin Ponitz from the Institute of Mechanics and Fluid Dynamics in Germany and colleagues.

Peregrine falcons are one of the world's fastest birds and may reach up to 200 miles per hour when diving. Scientists studying the body shape and wing contour of the bird want to better understand how they reach these high diving speeds while maintaining maneuverability. Researchers trained peregrine falcons to dive in front of a 200 foot dam, and scientists captured 35 dives with a stereo high-speed camera system and hi-res camera. The images allowed researchers to reconstruct the flight path and body shape of the falcon during certain flight phases, and to build a life size model of the falcons. They then analyzed the aerodynamics of the model bird in a wind tunnel. 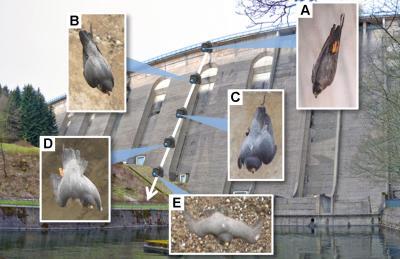 The body of a falcon changes shape as they gain speed.

The body of a falcon changes shape as they gain speed. During the 200 foot dive, birds reached 50 miles per hour and the body shape showed a V-type configuration, with the leading edge of the wing appearing like a wavy structure with grooves in the gaps between the neck and both shoulders. A comparison of the high-resolution pictures of the diving peregrine and visualizations of the model in the wind tunnel indicate that feathers may pop-up in the same regions where local flow separation occurs. These results may shed light on the aerodynamics and structural adaptations of high speed diving.Benjamin Ponitz added, "Only the combined investigations of a model in a wind-tunnel with the dives of individual falcons allowed us to reveal diving flight details. In particular, feathers of peregrines pop-up and might prevent local flow separation." 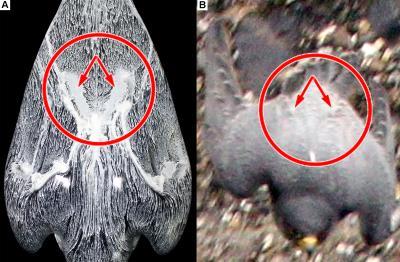