Evidence of past volcanic activity in the Caribbean Sea

Boulder, Colo., USA - Reconstructing the magnitude of past volcanic eruptions is important in informing predictions about future eruptions and hazards. This is difficult to accomplish from records on land -- old eruptions are often eroded away, buried beneath later eruptions, or obscured by vegetation and soil. Most volcanoes are close to the oceans, so much of the erupted material falls into seawater and accumulates on the seafloor.

More complete records of volcanic activity can be found in marine sediments. In 2012, Integrated Ocean Drilling Program (IODP) Expedition 340 recovered a 140 meter long sediment core between Montserrat and Guadeloupe in the northeastern Caribbean Sea. This is close to several volcanically active islands in the Lesser Antilles. Most notably, this core contained an 18-cm-thick ash layer that was deposited 2.4 million years ago, and came from Guadeloupe, ~75 km to the east.

Volcanological models indicate this layer derived from a far larger eruption than any subsequently recorded event in the region. While a similarly large eruption would have a major impact on human populations in the region if it occurred today, it is important to note that such events are very rare in the Lesser Antilles, and there is no indication that another large eruption is imminent. 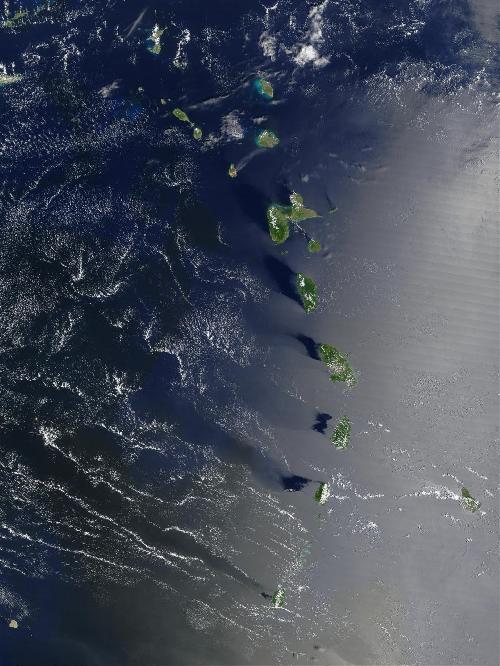 Discovery of a large 2.4 Ma Plinian eruption of Basse-Terre, Guadeloupe, from the marine sediment record

Other recently posted GEOLOGY articles are highlighted below:

Princess Elizabeth Land in East Antarctica is one of the last unsurveyed regions of Earth's land surface. Here, the bed beneath the Antarctic Ice Sheet has virtually no measurements, which has led to it being dubbed as one of Antarctica's two 'poles of ignorance.' Using satellite imagery, Stewart Jamieson and colleagues identified ice-surface features caused by ice flow over subglacial topography that is buried several kilometers beneath the ice. They mapped a series of linear features that connect to form a chain over 1,100 km long and suggest these represent a massive canyon system connected to a previously undiscovered, and very large, subglacial lake. The existence of the lake cannot be confirmed until new survey data are collected, the write, but sparse measurements confirm the presence of the canyons, suggesting they are up to 1 km deep. If water is present beneath the ice, then it will likely be guided through the canyons and drained to the ice-sheet edge.

In landslide prone terrain, determining the timing of individual slope failures is necessary to understand the evolution of these unstable landscapes and to advance from hazard recognition to risk assessment. Hazard assessments require knowledge of landslide frequency within a given period of time, yet dating landslides using traditional techniques, such as radiocarbon, can be difficult and cost prohibitive. Here, we present a new approach to dating landslides on a regional scale by using the surface roughness of landslide deposits, calculated from high resolution elevation data. By calibrating this measured roughness with radiocarbon dating, we show that the surface roughness of landslide deposits decreases over time at a predictable rate, which can be used to estimate landslide age. We apply this technique to date 25 deep-seated landslides in glacial sediment immediately surrounding the catastrophic 2014 Oso Landslide, and estimate an average landslide frequency of 1 every 140 to 500 years over the Holocene. The high frequency of landslides in this area shows that landscapes inundated by glacial sediment may remain highly unstable for tens of thousands of years. These results reinforce the importance of establishing robust regional landslide chronologies in similar regions globally.

Igneous horizontal intrusions (sills) represent an important contribution to magma transport and storage systems in the subsurface. The mechanisms of sill emplacement are critically important to models for thermal effects on the host rock, including hydrocarbon maturation, and greenhouse gas generation. Current models suggest that sill emplacement is controlled by layering within the hosting stratigraphy. The purpose of this study is to use detailed field observations from an exemplary sill in the Faroe Islands, on the European Atlantic Margin, to constrain the controls on sill emplacement in layered sequences. The sill climbs through the host stratigraphy at a low angle, parallel to thrust faults that accommodate minor regional shortening. The preserved early stages of sill emplacement -- minor segments, and steps in the sill margin -- show that it was emplaced during a phase of regional shortening, in an otherwise extensional (rift) setting. The sill locally exploits some layer interfaces, but overall, layering does not control sill geometry. This study presents the first identification of regional horizontal shortening as a major control on sill emplacement. The study also emphasizes the importance of the scale of observation when considering controls of sill emplacement.

Far-field effects of Appalachian orogenesis: A view from the craton

Formation of the Himalayas or Alps had pronounced effects in the continental interiors at considerable distance from these mountain belts. The effects of mountain building in the Appalachians 470 to 370 million years ago were less documented. A working hypothesis is that the faults that controlled the formation of the Hudson Bay Basin, one of the largest sedimentary basins in North America, record the tectonic events that shape the Appalachians. It is proposed that the basin forming faults were active when the plate convergence was favorably oriented but shutdown when the orientation of plate convergence changed during the final stage of mountain building.

This paper demonstrates that mountain-building processes in the Tarim and North China cratons (a craton is an old and stable part of the continental lithosphere) during Paleozoic time can be correlated with geological events associated with the assembly and subsequent incipient dispersal of Gondwana, a large landmass forming 550-600 million years (Ma) ago. Zircons with magmatic ages of 500 to 400 Ma from the northern margins of the two cratons display a large spread and decreasing εHf(t) values with time, whereas 400 to 310 Ma zircons have dominantly positive εHf(t) values and an overall increasing trend. The marked shift of the zircon Hf array at around 400 Ma was most likely related to a major tectonic switch from advancing to retreating accretionary orogenesis. The temporal agreement of these events, and their accordance with collision/accretion events during Gondwana assembly, suggest that the Tarim and North China cratons likely collided with the northern Australia margin of East Gondwana at around 500 Ma. They subsequently dispersed from Gondwana in the Early Devonian (420 to 390 Ma), coinciding with switching accretionary tectonics along the northern margins of the two cratons that were possibly induced by the slab rollback of the subducting Paleo-Asian Ocean plate.

Does shallow dike intrusion and widening remain a possible mechanism for graben formation on Mars?

Shallow igneous dike intrusion and widening was proposed several decades ago as a cause of surface faulting and graben formation on Earth. This hypothesis was subsequently applied to the spectacular linear and/or radial graben systems visible on Mars. However, a recent numerical stud has suggested that shallow dike intrusion cannot explain these features on Mars. Here, the typical style of deformation above the shallow tips of widening dikes on Mars is reexamined. In the numerical experiments presented here, subsidence and extensional faulting (graben formation) are produced above the dikes tips. Results indicate that dike widening does indeed remain a possible mechanism for graben formation on Mars. Implications for the interpretation of deformation associated with shallow dike intrusion on Earth and distant planetary surfaces are discussed.