While the emergence of free online educational courses may seem like an advantage to all, students of lower socioeconomic backgrounds are less likely to enroll in such programs and earn a certificate than their peers of higher socioeconomic backgrounds, a new study finds. The results are in contrast to the theory that the free and easy-to-access nature of Massive Open Online Courses (MOOCs) may close the gap between students from different backgrounds. To analyze socioeconomic enrollment disparities in MOOCs, John Hansen and Justin Reich looked at registration and completion patterns in 68 courses offered by Harvard and MIT, combing through data from 164,198 U.S. participants between ages 13 and 69. They used three indicators to determine socioeconomic status (SES): parental educational attainment, neighborhood median income, and neighborhood average educational attainment. Data suggest that an additional $20,000 in neighborhood median income increased the odds of participation by 27%. Each additional year of neighborhood-average educational attainment increased the odds of participation by 69%. Among adolescents, the relationship between neighborhood SES and MOOC participation was strongest. For an adolescent participant whose most educated parent received a bachelor's degree, the odds of certification were roughly 1.75 times those of an otherwise similar adolescent in the same course whose most educated parent held less than a bachelor's. Students from all backgrounds earned certificates in Harvard and MIT MOOCs, but especially among the young, students of higher SES were more likely to earn a certificate. 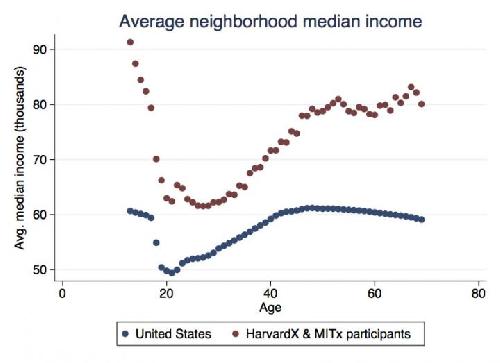 Neighborhood income for US Harvard/MIT MOOC participants compared to general US population. This material relates to a paper that appeared in the Dec. 4, 2015, issue of Science, published by AAAS. The paper, by J.D. Hansen at Harvard University in Cambridge, MA, and colleagues was titled, "Democratizing education? Examining access and usage patterns in massive open online courses." Credit: John Hansen and Justin Reich

source: American Association for the Advancement of Science